Gloucestershire Highways crews are investigating a known landslip site on the B4058 Nailsworth to Horsley Road, Stroud, following heavy rain.
The site, which has already been the subject of some corrective work this year, has been affected by some surface water on the road, which has had to be temporarily closed while further investigations are carried out.
Highways crews have placed sandbags on the road to protect the properties below from debris sliding down the embankment. Meanwhile, two households have been asked whether they can stay with friends or relatives as a precautionary measure while workers relieve pressure on the landslip.Investigations could reveal some further corrective work, due to take place in the New Year, needs to be brought forward in response to changes in the area.

“This site was already being monitored closely and work was underway to correct previous issues. The heavy rain has meant some slight changes to the embankment and, as a precaution, we have had to close the road and make sure the surrounding area is safe. As soon as the road has been investigated further we will be able to look at what action needs to be taken.”

A red alert has been issued for people in or near coastal areas between Pardoo and Mardie, including Port Hedland, South Hedland, Whim Creek, Roebourne, Point Samson, Wickham, Karratha and Dampier.

The Department for Child Protection and Family Support has set up a relocation point at the JD Hardie Centre in South Hedland, where about 85 people have sought shelter.

A yellow alert is current for people in inland areas, including Marble Bar, Tom Price, Paraburdoo and Pannawonica.

Authorities say there is a possible threat to lives and homes.

A blue alert remains for people in or near coastal areas between Bidyadanga and Pardoo, and between Mardie and Onslow, and the inland area from Marble Bar to Newman.

Cyclone Christine will continue to intensify and was expected to cross the coast between Karratha and Port Hedland today, the Bureau of Meteorology says.

Dozens of towns and villages were placed on flood alert as rivers swollen with two weeks of torrential rainfall face another 100mm of rain by January 8.

Southerly winds will be light to moderate for most of the night, but towards dawn winds will become southeast and increase fresh to strong in the south.

The forecasters issued a weather warning as an electrical storm with lightning was reported in mid Cork and flood barriers in north Cork held against the surging River Blackwater.

The lightning storm resulted in power outages in the Macroom and Beal na mBlath areas.

Traders and householders in Cork city have been warned that there is a risk of flooding due to the combination of high tides and the swollen state of the River Lee due to recent rainfall.

Localised flood warnings were issued in Cork, Galway, Roscommon, Tipperary and Waterford as winds eased but the risk of flooding increased.

A landslide at Legan, outside Thomastown in Kilkenny, forced the temporary closure of the Kilkenny-Waterford rail line.

Iarnrod Eireann warned passengers that bus transfers will remain in place until the landslide is cleared and the line is inspected.

Met Eireann warned that rivers are being swollen by torrential rainfall which fell over the previous week and was now flowing towards the sea from higher ground.

A ‘yellow status’ gale warning remains in place for waters off Ireland.

The Road Safety Authority (RSA) pleaded with motorists to drive with caution given the amount of ‘spot’ flooding on rural and regional roads.

Flood barriers in Fermoy and Mallow prevented homes and businesses from being hit by flood waters from the River Blackwater.

However, floods still forced the closure of the Mill Road in Fermoy and the Park Road in Mallow.

The National Weather Service has issued a Winter Storm Watch for Cuyahoga and surrounding counties. Heavy snow is expected in the area New Year’s Day and continuing through till Thursday. Check out the complete alert below.

* Accumulations…2 to 4 inches of snowfall may occur on New Year’s Day. The heavier snow will arrive Wednesday night with another 2 to 4 inches possible by Thursday afternoon as the snow begins to taper off an additional 1 to 3 inches may occur. This would produce a storm total of 5 to 11 inches with locally higher possible.

* Timing…snowfall will develop over the region on Wednesday and continue into at least Thursday morning. The snow will then taper off through Thursday afternoon.

* Winds…westerly winds of 10 to 20 mph will be common New Year’s Day but will increase out of a northerly direction at 15 to 20 mph Wednesday night then continuing into Thursday.

* Impacts…travel will be impacted today through Thursday.

Precautionary/preparedness actions…A winter storm watch means that heavy snow is possible. if you are in the watch area…remain alert to rapidly changing weather conditions. Stay tuned to the national weather service or the local news media for the latest updates and possible warnings.

Authorities in El Salvador evacuated an area around the Chaparrastique volcano after the peak shot a cloud of gas and ash about three miles into the air on Sunday.

Civil Defense Director Jorge Melendez said a yellow alert had been issued and investigators had been sent to the area to look for signs of fresh lava, but that none has been detected so far.

“We have implemented emergency measures to evacuate villages located within 3 kilometers of the volcano,” Melendez said.

Shelters have been set up for the evacuees, but Melendez said some inhabitants had been loath to leave their homes.

“One has to leave for one’s own safety,” he said.

Assistant Health Minister Eduardo Espinoza said two people had been treated at hospitals for respiratory problems apparently linked to the eruption, “but we do not have any serious cases to report.”

“We are providing assistance to people evacuating, and we are asking them to protect themselves against the gases, which can affect the respiratory tract,” Espinoza said. He also urged those near the volcano to avoid drinking from local water sources.

The 7,025-foot volcano is located about 90 miles east of San Salvador, the capital.

Its last significant eruption was in 1976.

San Miguel is one of the country’s largest cities and is located 30 miles from the volcano.

A string of earthquakes around the island of El Hierro in the Canary Islands has officials on alert for an underwater volcanic eruption.

El Hierro, the smallest and farthest south and west of the Canary Islands, has a population of about 10,000. Two years ago, a new underwater volcano appeared off the coast of the island after hundreds of earthquakes struck the area in a matter of days in July 2011.

Last week officials on the island announced that a new string of earthquakes and a sudden change in height of the new volcano could be a harbinger of eruption.

Shortly after the Dec. 27 announcement, El Hierro saw its largest earthquake ever – a 5.1 magnitude tremblor that struck off the coast at a depth of about 15 kilometers. Between Monday and Wednesday of last week, more than 500 earthquakes rattled the island which, like all of the Canary Islands, is a popular tourist destination.

The swarm of earthquakes has led to notable deformations in the earth around the island. One deformation lifted the ground 3 centimeters in 24 hours, according to data from Earthquake-Report.com, an independent earthquake reporting site.

“The changing deformation pattern shows the biggest magma movement below the island concentrating in the El Golfo area (Sabinosa to Frontera) and is an additional sign that the crisis isn’t over yet,” Earthquake-Report said Monday.

As of Monday no new earthquakes have occurred in the region, but the volcanic eruption risk remains “yellow.”

“This warning means that activity is increasing at the volcano, but no eruption is imminent. A similar burst of activity prompted a yellow warning in June 2012, but the volcano soon quieted down,”

A rumbling volcano in western Indonesia that has been spewing lava and clouds of gas high into the sky let out a new, powerful burst on Tuesday, prompting warnings for airplanes and triggering panic among villagers, officials said.

More than 19,000 people have been displaced by Mount Sinabung in North Sumatra province, which has been erupting for months and which shot lava and searing gas into the air nine times overnight, the nation’s disaster mitigation agency spokesman, Sutopo Purwo Nugroho, said on Tuesday.

The volcano started spitting clouds of gas and lava as high as 7,000 metres in the air late on Monday, but no casualties were reported. 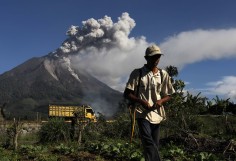 Villagers have been evacuated from areas within a danger zone 5 kilometres around the crater to temporary shelters. Authorities had raised the alert status for Sinabung to the highest level in November.

Gray ash covered villages, farms and trees as far as 70 kilometres southeast of the mountain.

“Mount Sinabung remains on the highest alert level and we have warned there should be no human activity within a five-kilometre radius of the crater,” Nugroho said.

“On Monday night, 19,126 people had fled their homes, and we expect that number to rise,” he said.

Police and soldiers were patrolling the danger zone to evacuate people who have chosen to stay in their homes, Nugroho said.

The 2,600-metre-high volcano erupted in September for the first time since 2010 and has been rumbling ever since.

The 2010 eruption killed two people and caught scientists off guard because the volcano had been quiet for four centuries.

Transportation Ministry spokesman Bambang Ervan said airlines had been notified to avoid routes near the mountain.

Mount Sinabung is among about 130 active volcanoes in Indonesia, which is prone to seismic upheaval due to its location on the Pacific

“Ring of Fire”, an arc of volcanoes and fault lines encircling the Pacific Basin.

In August, five people were killed and hundreds evacuated when a volcano on a tiny island in East Nusa Tenggara province erupted.

The country’s most active volcano, Mount Merapi in central Java, killed more than 350 people in a series of violent eruptions in 2010.