FALLEN TREE ALERT: Tree down on the Balcombe Road in Horley

FALLEN TREE ALERT: Another Tree Down“ A286 Brook Road Blocked” 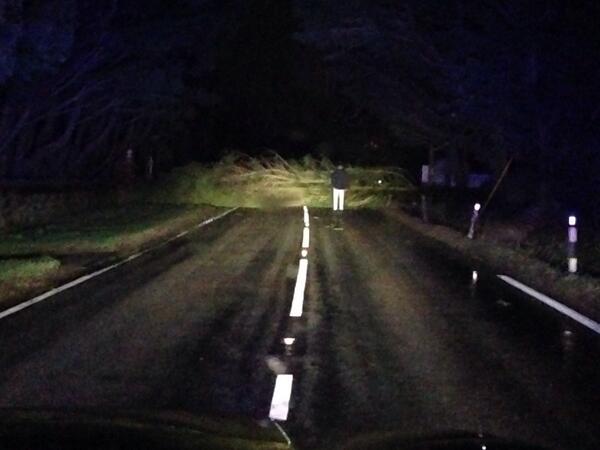 A fresh battering by heavy winds, rain and snow is under way as the latest winter storm moves up through the southwest of England.

Forecasters warn the appalling conditions which have ravaged parts of the south show no signs of abating, with heavy rain on Friday and Saturday.

The stormy weather will strike in a “multi-pronged attack”, according to Met Office experts, as up to 40mm (1.6 inches) of rain falls in six hours.

Winds of up to 80mph are also hitting parts of the country.

In Cornwall, photographer Tracey Suckling captured the moment  a wave crashed into a shopping street in Newlyn, Cornwall, soaking residents.

Elsewhere, a landslide blocked the railway on the Redhill Line out of London, near Merstham Tunnel.

Thousands of passengers face severe delays following the incident, which happened at around 5.20pm today, and they are expected to continue well into the evening.

Meanwhile, the army is helping instal new flood barriers near the Thames – one already nicknamed the ‘Chertsey sausage’ – as workers race to beat the oncoming rain.

In Portsmouth, police warned residents to ignore calls from a hoaxer asking them to evacuate their homes.

Hampshire Police said the man was falsely claiming to be from the National Flood Helpline.

The Energy Networks Association said it is preparing for possible power outages in southern England this evening.

Drivers are also being warned of treacherous conditions on some exposed roads.

David Cameron has promised to do “whatever it takes” to help those affected and said the Government was “fighting on every front”.

Prince William and Prince Harry have also been mucking in to help flood victims, joining the Household Cavalry to shore up sandbag defences in Datchet, Berkshire.

A Kensington Palace spokesman said the princes “wanted to show their support for the flood victims”.

Fifteen of them cover areas around the River Thames, two are in Somerset, two in Devon, one in Cornwall, three in Dorset and one for the River Severn at Alney Island, near Gloucester.

More than 350 less serious alerts cover the rest of England and Wales.

The new rain could cause rivers to burst their banks again and coastal areas are at risk from large waves.

Rainfall from 6am this morning to 6pm exceeded 20mm in many areas of the country including 31mm in Bournemouth, 26mm at North Dartmoor and 20mm in Plymouth.

In the highlands of Wales, northern England, Northern Ireland and Scotland, the rain could turn to snow, with up to 20cm (8 inches) falling above 1,300ft (400m).

Power is still out to around 17,000 homes in northwest England after gusts of more than 100mph battered parts of the British Isles on “Wild Wednesday”.

Ireland is also taking a pounding from the harsh weather, with heavy rain and high tides expected to bring flooding to Cork on Friday night.

Phone lines are also still down for tens of thousands of Irish households and 50,000 are without power.

In the UK, Windsor, Maidenhead and other Thames communities remain at high risk as the river rises in places to its highest level for 60 years.

An ‘aqua dam’ – already dubbed the ‘Chertsey sausage’ by some people – has been put up in the Surrey town to protect vulnerable homes.

Defence Secretary Philip Hammond, MP for the area, was out on Friday to see the preparations.

He told Sky News things had “bedded down” in terms of dealing with floods, but that the big challenge for everyone would be “managing the transition from crisis to recovery”.

Gurkhas and Environment Agency workers in nearby Staines have installed another barrier, shipped in flat-pack from Sweden, that can hold back water five feet high (1.5m).

Meanwhile, residents living near the River Severn have been told to “take action now” as the Environment Agency added a new ‘danger to life’ warning for Alney Island, near Gloucester.

Alerts for the Severn in Worcestershire have been in place for days, with the river reaching its highest level since records began.

The flooding risk also continues on the Somerset Levels, which have endured weeks of misery, and there is still a high risk of coastal floods in Dorset – particularly in Christchurch, Chiswell and Preston beach.

Since early December, 5,800 properties have been flooded across the country.

Prime Minister David Cameron, speaking in Blackpool this morning, said the Government was “fighting on every front”.

He said: “The military are in there, sandbags are being deployed, we’ve got the biggest pumping operation in our country’s history on the Somerset Levels. Everything that can be done will be done.”

Some 2,200 personnel from the Army, Navy and RAF have been drafted in to deal with the ongoing crisis. Three thousand more are on standby.

They are helping fill and distribute sandbags, put up barriers, assist residents and examining the condition of existing flood defences.

The military has also sent a Tornado GR4 jet and a Sentinel R1 aircraft to take surveillance pictures of the flooding.

Some 70% of the fire and rescue service in England and Wales are now involved in the relief effort – the largest deployment since the Second World War.

SEVERE ALERT: Severe weather here in Cornwall again! winds up 76mph and increasing many trees down roads flooded due to sea please keep away from the sea

February 14, 2014
SEVERE WEATHER ALERT UK & IRELAND
LANDSLIDE ALERT: A landslip North of Redhill is being reported. Because of this, rail journeys btwn E. Croydon & Redhill are rerouted via Gatwick/Horley
Courtesy Of Redhill Travel