The pilot of the plane, which experienced a technical glitch, is safe.
The plane’s landing gear caught fire when just the aircraft was to land at the Jahurul Haque Base near the Shah Amanat International Airport.
The fire was put out immediately, said the airport’s manager Wing Commander Nur E Alam told bdnews24.com.
A BAF official of the Jahurul Haque Base, seeking anonymity, told bdnews24.com that the aircraft experienced technical glitch while it was landing and the pilot had to evacuate by the ejector-switch.
“We are looking in to the matter,” said the official adding that the pilot has been given first aid.
http://tinyurl.com/o4vtwes
April 30, 2014

Five students living in a Dunedin house had an early wake-up call this morning when a mud bank gave way and crashed into the side of their flat.

The slip occurred around 4am, prompting police to evacuate the five students who were sleeping at the time.

The landlord of the Queen St property says he had warned authorities about the potential for a slip after heavy rain over the Easter period.

The shaken occupants haven’t been left out in the cold – the landlord has put them up in a hotel until new accommodation can be found. 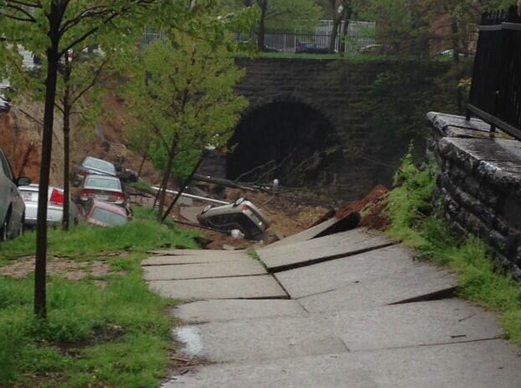 A month’s worth of rain caused widespread flooding Wednesday, prompting multiple rescues and causing a massive landslide that poured half a dozen cars onto train tracks in Charles Village.

A landslide caused a section of 26th Street near Charles Street to collapse onto CSX rail tracks about 4 p.m., according to the Mayor’s Office of Emergency Management. People were asked to avoid the area. Half a dozen vehicles fell from the roadway onto the tracks.

Ian Brennan, a Baltimore Fire Department spokesman, said the department had no reports of injured people and its response to the slide was not a “recovery” operation about 4:45 p.m.

“But with the continued rain, they’re putting in a pretty big perimeter around the scene in case there is any more movement,” he said.

Homes on the street where the slide occurred and others in the area are being evacuated as part of that process, Brennan said.

A tornado warning was issued through 5 p.m. in Charles and St. Mary’s counties as a severe thunderstorm moved through, according to the National Weather Service. 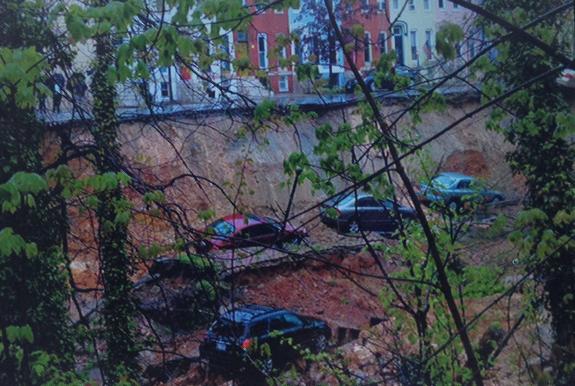 Nearly 3 inches of rain is possible to fall by early Thursday morning, on top of 1-2 inches that fell Tuesday. At BWI Marshall Airport, more than 3 inches of rain fell from Monday night through 3 p.m. Wednesday.

Drivers are cautioned to avoid roadways covered with floodwaters, as most flooding deaths occur in vehicles, according to the National Weather Service. Road closures and water rescues were reported across the region.

Defense Highway was closed between St. Stephens Church Road and Huntwood Drive, between Annapolis and Crofton. Ritchie Highway was down to a single northbound lane at Joyce Lane in Arnold.

In Harford County, Department of Public Works engineers assessed the integrity of an earthen dam off the 4400 block of Harford Creamery Road Wednesday morning. The dam, built in 1961 along Little Deer Creek, holds back approximately 8 million cubic feet of water, according to emergency services officials. 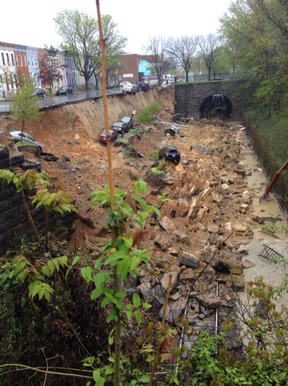 Engineers they are planning to pump out some of the water from the impoundment behind the dam in an effort to gain better access to a clogged outlet pipe.  The pumping is expected to reduce the level of the water in the impoundment by eight feet over the next three days, emergency services officials said.

The surge of groundwater caused a basement wall to collapse in the 100 block of Bon Aire Avenue in Brooklyn Park, flooding the basement and forcing residents to relocate, Swindle said.

Flooding was expected to slow MARC trains Wednesday evening, with flood related speed restrictions expected to cause delays of 20-35 minutes on the Camden and Brunswick lines, according to the Maryland Transit Administration.

Storms are possibly in the evening hours, and could bring damaging winds and possible isolated tornadoes, particularly in Southern Maryland. The highest risks of severe weather are expected to stay south of Maryland, however.

The National Weather Service issued a tornado watch across eastern Virginia and North Carolina through 7 p.m.

Storm and rain chances are expected to taper off by Thursday morning, with a gradual clearing of clouds over the day Thursday and highs in the mid-70s.

Mostly sunny skies and highs in the upper 60s are forecast Friday and through the weekend.

A single-engine plane crashed into a South Dakota wind farm after flying through fog and low-hanging clouds on Monday, killing all four passengers on board.
National Transportation Safety Board authorities found the wreckage at the South Dakota Wind Energy Center, where 27 turbines tower 213 feet tall, not counting the blades. One of the turbines was damaged, but the heavy fog has kept investigators from inspecting the scene, according to Syracuse.
This is not the first time a plane has crashed into a wind farm–in 2008 near southeast Minnesota, poor weather caused the pilot of a 1948 Cessna 140 to lose control while trying to fly around wind turbines.
Funeral homes confirmed the deaths of the 30-year-old pilot, Donald J. “D.J.” Fischer, and of cattlemen Logan Rau and Brent Beitelspacher. Another funeral home declined to provide information on the fourth victim.
The fatal crash deeply affected the ranching community and Gettysburg, South Dakota.
http://tinyurl.com/o74w7m2
April 30, 2014

A raging wildfire is forcing some residents and at least three schools to evacuate Wednesday.

The Etiwanda Fire is burning about 40 miles east of Los Angeles.

The flames were first spotted early Wednesday, just north of the 210 Freeway.

So far it has burned at least 200 acres.

Unpredictable 60-mile-per-hour winds are driving the fire and keeping crews away.

Officials have not yet determined what began the fire.

Lynchburg police and firefighters responded about 2:00 p.m. Wednesday to a train collision and fire near the Amazement Square and Depot Grille. The crash is also a HazMat incident.
A material on the surface of the James River is burning with large flames and heavy black smoke. Crude oil is leaking into the James River, and boom to hold the crude oil in place has been placed in the river.
The CSX train was hauling 12 to 4 CSX tanker believed to be carrying crude oil.
The 9-1-1 dispatch center was flooded with calls and callers reported getting a busy signal when trying to call 9-1-1 to report the fire. 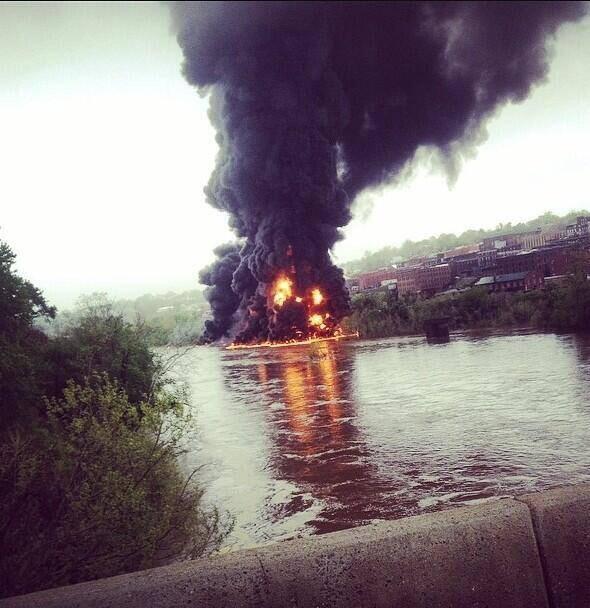 “On the same day, several loud booms were also heard within an eight kilometer radius from the Mount Merapi peak.”

The status of the two most active volcanoes in Java Island, Mount Slamet and Merapi, were raised by the authority on Wednesday following increasing volcanic activities.
The Geology Disaster Technology Development and Research Center (BPPTKG) of Yogyakarta raised the status of Mount Merapi from normal (alert level I) to waspada (alert level II), while Mount Slamets was raised from alert level II (Waspada) to alert level III (Siaga).
Chief of Yogyakarta BPPTKG Subandriyo said here on Wednesday the volcano, located at the border between Central Java and Sleman, Yogyakarta, recorded 20 low-frequency tremors on April 29, which was predicted as an indication of the increasing volcanic gas flow that had the potential to cause an eruption.
“On the same day, several loud booms were also heard within an eight kilometer radius from the Mount Merapi peak,” Subandriyo said.
Between April 20 and April 29, 2014, there were 37 avalanches, 13 multiphase tremors, four blasts or phreatic explosions, 24 tectonic tremors and 29 low-frequency tremors at the volcano.
The increased status of the mountain, therefore, meant that no hiking or climbing will be allowed, except for research or for disaster mitigation efforts.
“We also asked residents living near the Mount Merapi slope not to be provoked by rumors about the volcanoes eruption but to follow instruction from the local authority,” he added.
There was no evacuation order from the authority in the current volcanoes status.
“We asked the local authority to socialize the condition of Mount Merapi so that residents get the correct information,” he said.
The BPPTKG of Yogyakarta will intensify the observation on Mount Merapi following its increasing volcanic activity.
The last major explosion of the most active volcano in Indonesia occurred in 2010.
The eruption began in late October 2010 and a series of eruptions continued into November.
Over 350,000 people were evacuated from the affected areas and at least 353 were killed during the eruptions.
Meanwhile, The Volcanology and Geology Disaster Mitigation Center (PVMBG) raised Mount Slamets status on Wednesday at 10:00 a. m. local time (GMT+7) following the increase in volcanic activity.
Chief of Information and Data Center of the National Disaster Mitigation Agency (BNPB) Sutopo Purwo Nugroho said on April 29, between 12:00 a. m.-06:00 a. m., 30 eruption quakes, 67 quakes from the blasts, and 26 loud booms were recorded in Mount Slamet by the agency.
The volcano also spewed a thick brownish white smoke 150-700 meters high and lava that flowed to a 1,500 meter radius from the mountains peak.
“Swelling of the ground around Mount Slamet can be seen from observation posts in Cilik and Buncis. It shows that the volcano is inflating,” Nugroho said.
The agency issued a recommendation of an exclusion zone of four kilometer radius. No camping, hiking and tourism activity will be allowed within the radius.
There is no evacuation order as the villages around the volcano are still outside the exclusion zone. Peoples activities remain normal.
The nearest village, Jurang Mangu of Pulosari Subdistrict of Pemalang, is located 10-12 kilometers from Mount Slamets peak,” Nugroho said.
The BNPB is coordinating with regional disaster mitigation agencies (BPBD) of five districts located around Mount Slamet, Pemalang, Banyumas, Brebes, Tegal and Purbalingga, for mitigation measures and socialization to the society.
http://tinyurl.com/q4n642y
April 30, 2014

A woman died and at least 1450 houses damaged and unspecified number of people displaced from their homes due to a cyclone accompanied by hail storms in two districts of Tripura, official sources said on Wednesday.

At least 200 families were displaced from their houses in Ambassa subdivision of Dhalai district and many trees and electric posts were uprooted due to the storm last night, official sources said.

“About 250 houses were totally damaged and more than 1000 houses partly damaged due to the cyclone and hailstorm last night,” Mr. Lodh said.

Around 200 families were evicted from their houses from two villages — Shabdakarpara and Bongshipara and they took shelter in government buildings.

At least 50 electric posts were uprooted from the subdivision on Tuesday night, sources added.