Authorities in Calhoun County say a woman and her 7-year-old son died when their car was hit by a train in Oxford.

Coroner Pat Brown tells the Anniston Star, 35-year-old Temeshica Chatman and her son Nytavioun Powell were both ejected from the car when it was hit by a train Saturday morning.

Brown says Chatman was pronounced dead at the scene and her son died at the Regional Medical Center in Anniston. Oxford Police Chief Bill Partridge says Chatman’s 20-year-old daughter was driving the car and was airlifted to UAB Hospital in Birmingham with life-threatening injuries.

Police say the crash is under investigation.

A passenger train has collided with a tanker killing at least one person and injuring seven others in the Dortyol district in the southern province of Hatay Sunday, according to the Turkish state railways.

The train, which was heading towards Iskenderun from Mersin city, crashed into a tanker carrying fuel at a level crossing.

The injured have been taken to nearby hospitals and the driver of the tanker, Omer Ucgul, has been named as the person who has died.

A Stearman biplane crashed during the Thunder Over Solano Air Show at the Travis Air Force Base in Fairfield, Calif. Sunday afternoon, the FAA said.

Local emergency responders are at the scene of the crash. The condition of the pilot is currently unknown.

The official Facebook page of Travis Air Force Base posted a message around 2:40 p.m. which said the air show had been canceled due to the crash:

“The Travis Air Expo has been cancelled due to the aircraft crash of an aerial performer. Guests of the base should comply with Security Forces instruction to exit the installation. Security Forces requests for individuals to provide photo and video footage of the crash to assist in the investigation. Call 424-2000 for more information about photo and video collection.”

Eyewitness pictures and video on Twitter and Instagram caught the aftermath of the crash, showing thick black smoke and fire engines rushing to the scene.

Berkeley resident Urso Chappell tweeted out a picture from the parking lot.

“This is not what you want to see at an air show. A bi-plane crashed here at Travis Air Force Base.” Chappell tweeted.

Chappell told NBC Bay Area that “he did not see the accident happen, just the horrible aftermath.”

“I had already left the air show and was in the parking lot. I just saw fire trucks heading toward the tarmac,” he said.

A KCRA 3 employee who was at the air show said the biplane flew into the ground while flying upside down, the station reported. 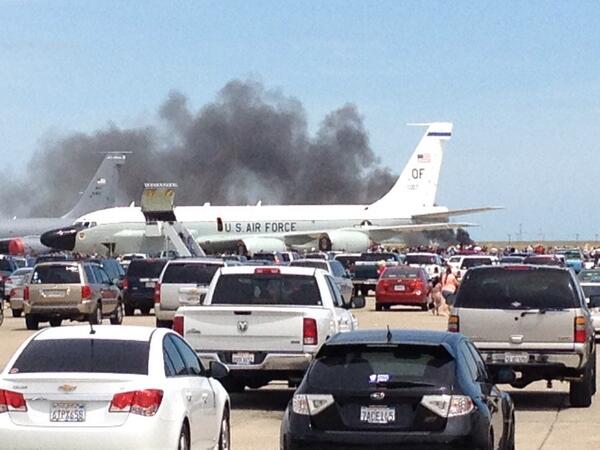 Millions of bees found dead ‘is a mystery’ in Zaziwil, Switzerland

Millions of bees found dead ‘is a mystery’ in Zaziwil, Switzerland
May 4, 2014

Mass die off of fish in a river in Fujian, China

3,500 Chickens suddenly die due to avian flu in Karanganyar, Indonesia

Based on the information gathered by journalists , in the last three months has been noted that 10 cases of poultry owned by residents in some areas in Karanganyar attacked the bird flu virus . In fact , as many as seven turkeys chickens owned by residents Jetis Kulon village , Village Jetis , District of Jaten also died suddenly . The phenomenon of bird flu turkey attack is relatively new . The reason for this AI viruses only attack chickens , ducks , and stuck .

Disnakkan head Karanganyar , Sumijarto say about the death of chickens turkeys types that occur in Hamlet Jetis Kulon , Jetis Village , District of Jaten is indeed quite rare . Upon receiving the news , it was immediately reported to Disnakkan Central Java Province .

” There have been 10 cases of poultry deaths due to bird flu virus in the first quarter . The case was assessed to rise over the previous year were only 20 cases , ” beber Sumijarto , Friday ( 2/5 ) .

Based on data Disnakkan , at the end of 2013 as many as 8,000 dead birds are known to die suddenly due to a virus attack AI . The area is often attacked by the AI ​​virus , among others, the District Gondangrejo , Kebakkramat , Tasikmadu , Karangpandan , Mojogedang , and Jaten.