A sandstorm covered the city of Zabol in southeastern Iran in darkness on Saturday June 15 with winds reaching 45 kilometres per hour and heavily restricting visibility. ILNA reports that on Saturday, it was as if the sun did not rise on Zabol, as the city was shrouded in dust and particles throughout the day

The Sistan-Baluchistan province meteorology office announced that the storm originated in Yazd, Kerman and Southern Khorasan provinces as well as the Iranian border regions with Afghanistan.

The report adds that the volume of dust particles in the air was well over the expected levels with regard to the wind speed.

The report adds that the winds are increasing in speed and there are more winds in the forecast throughout this week. 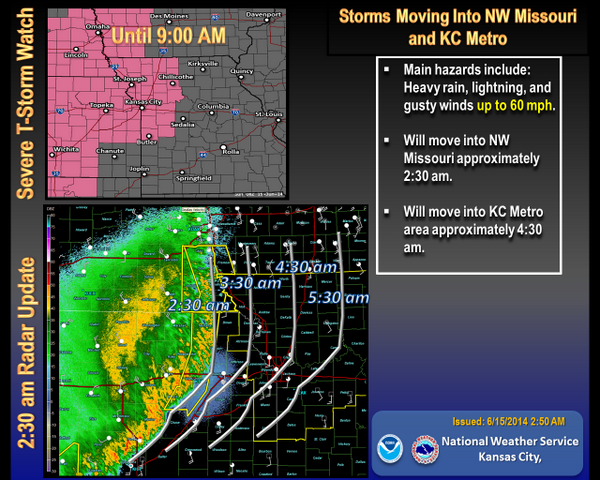 The powerful thunderstorm that pounded the Plains with grapefruit-sized hail is sliding east on Sunday, bringing the threat of damaging winds and the potential for tornadoes.

Saturday was the 12th consecutive day that severe weather was reported nationwide, according to meteorologists.

Winds of up to 90 miles per hour battered parts of Kansas overnight, according to the National Weather Service.

It said the severe storms are expected to weaken slightly but still produce strong winds and nasty weather for the Kansas City area.

With thunderstorms moving east, swathes of the country from southern Wisconsin through to Illinois and central Missouri will be hit on Sunday, according to The Weather Channel.

It said that large hail and damaging winds pose the greatest threat, but an isolated tornado or two can’t be ruled out.

The Weather Channel warned winds could reach up to 80 miles per hour in Nebraska’s capital, saying that tree damage is likely.

Several areas in the upcountry have been hit by floods, a rare occurrence according to the Meteorological Department. More than 2,000 people have been affected, Disaster management Centre officials said yesterday.

In total 382 people were relocated in Nuwara Eliya and Kandy districts. Persons in Nuwara Eliya were temporary relocated at Tonbil Tamil Vidyalaya and Christmas Farmwatta while those in Kandy were given shelter at the Nawalapitiya Madya Maha Vidyalaya, Karahadungala Mosque, Kandapitiya Mosque and Nawalapitiya West Community Center.

According to the Nuwara Eliya District Secretariat officials people in high risk areas will also be evacuated if the rains continue.
In addition during this week over 1500 people were affected by floods, landslides and high winds in Ratnapura District. By Friday night nearly 500 were displaced.

Over 60 houses were damaged in the three districts, up to yesterday.

Trains heading from Colombo to Badulla and Badulla to Colombo were suspended due to an earth slip. The Railway Control Room said they would keep a watch for such risks this week.

Following several days of torrential rains last week in the areas of Ratnapura, Kandy and Nuwara Eliya, 26 deaths were reported and over 100,000 people were affected. The Meteorological Department warned that the pattern would continue for several days.

“What we are experiencing now are the monsoonal winds which are fairly strong in the Central and Sabaragamuwa regions. In addition South Western coastal areas such as Galle and Matara would experience strong winds and rains,” Meteorological Department Director L. Chandrapala said.

This week’s rains in the Elapatha, Kiriella and Ayagama areas in Ratnapura District that resulted in floods and landslides saw around 500 people being evacuated to temporary shelters in safer areas. The Army and Navy were also on standby in case of any emergency situation.
“What we mean by floods in Ratnapura is when the Kalu Ganga records a water level of over six metres. This week we had two situations with minor floods of 6.7 metres and 6.2 metres. We informed residents who would be affected to evacuate,” Ratnapura District Secretariat Sunil Kannangara said.
He said 16 of the 17 DS divisions were vulnerable to floods or landslides. Last week around 20,000 people were evacuated to temporary shelters, and dry rations and cooked food were provided to those affected.
In addition a bridge on the Rakwana- Deniyaya Road collapsed on Thursday (12). Though no injuries were reported traffic came to a standstill until vehicles were asked to take an alternative route.
“Rain may have played a part in this incident as the bridge was old. It is fortunate that no one was injured,” Mr. Kannangara said.
Meanwhile, the National Building Research Organization (NBRO) has warned residents in affected areas to be vigilant of landslides, floods and other mishaps that could arise. A senior scientist at NBRO, Kumari Weerasinghe said if rains continue in these areas the people will have to be moved to safer areas.

“We have warned all concerned parties. The Kegalle Kandurata Vidyalaya was closed on Friday after we alerted the authorities of the possible risks owing to the continual rains. We will continue to observe and warn people to minimize any harm to life and property,” she said.

He added that by Friday the flood situation in most parts had normalised but the DMC would keep a watchful eye on the situation.

Stranded families say little help came their way
Desperate families affected by the torrential rains complain that the government had failed to provide them with timely relief.
Villagers of Kudaligama in Bulathsinhala say a majority of them have lost all that they had due to the floods but not all got aid and relief.
“A part of my house was damaged due to a landslide. We were asked to evacuate. No one came to see us or provide relief. We were desperate and had no place to go,” said 43- year old Lakshman Susantha.
He said some of the affected families were provided food but it didn’t reach those in higher areas.
“They simply tell us not to stay but where can we go? Where are the politicians who did not mind the rain during elections times?” he asked.
In the face of little or no government relief some residents had formed groups to help the affected people. M. S. M Hazeem a teacher at Veyangalla Muslim Maha Vidyalaya had joined one of these groups.
“We helped the people in Veyangalla, a village near Agalawatta which was flooded due to the heavy rains last week. There are at least 750 families living in the village,” Mr. Hazeem said.
He said the school’s teachers and the area mosque’s board of trustees, along with an area businessman of the area helped to provide food.
“We did not have enough food and we could only give only two packets of rice to each family. No government official came to their assistance,” he said.
However Kalutara District Secretary U. G. C. Jayalal denied this and said the government was doing all that it could.
“Now the rains have stopped and we are helping families to clean up the areas and rebuild their houses. Dry rations are being provided to affected families,” he said.

The man, 53, was being treated in hospital, said Mahmudur Rahman, of the Institute of Epidemiology, Disease Control and Research.

“Most probably, he contacted the virus while he was in Abu Dhabi in transit on his way back from the United States,” Rahman told Reuters.

First reported in humans in 2012, MERS causes severe and often fatal respiratory illness, with symptoms similar to those seen during the outbreak of severe acute respiratory syndrome (SARS) in 2003.

Its death rate of about 40 percent and reports of clusters of human-to-human transmission have raised concern it may blow up into a pandemic.

It has infected more than 800 people around the world, killing at least 310 of them. The vast majority of cases have been in Saudi Arabia, but there have also been sporadic cases and clusters across the Middle East and in Europe, Asia and the United States.

Heavy rains in the northeastern city of Natal, which will host the U.S.-Ghana match, led to flooded streets, a small landslide, and the evacuation of at least 50 homes and one apartment building Saturday evening.

The rains began on Friday and were expected to continue Sunday. The U.S. team arrived in Natal on Saturday afternoon before the Americans open World Cup play Monday evening. The team hotel is located about 10 minutes from the affected area.

There were no victims registered as of Saturday evening, according to Christiano Couceiro, a spokesman for the fire department. He said that public security organs of the state were already activated to take preventative measures. “Our teams are alert and ready to avoid accidents and to not have the city come to a stop due to this,” he said.

The most affected area, a beachside region called Areia Preta and neighboring Mae Luiza, is about a 15-minute drive from the Arena das Dunas stadium, where the teams will play. Mexico and Cameroon played during a downpour Friday.

Vice President Joe Biden is expected to arrive Monday for the match.

Heavy rains are common this time of year in Natal, and Brazil often sees loss of homes and lives in dramatic tropical rainfalls. Rio de Janeiro saw the country’s worst natural disaster in February of 2011, when at least 900 people died in flooding and mudslides in a hilly region approximately two hours from the city of Rio.

Thousands of residents have fled hundreds of villages in south and southwestern Pakistan after tropical cyclone Naunak struck the region.

About 2,000 residents fled the worst-affected district of Thatta where seawater driven by tall waves swept through 130 coastal villages on Sunday.

“These fishermen went fishing last week, but we lost contact with them over the last couple of days.”

Crops were destroyed in the towns of Kharochan and Ghora Bari as the intensifying storm pushed seawater over swathes of agricultural land.

An emergency was declared in the coastal district of Badin after 60 villages were inundated.

Rafiq Ahmed Qureshi, the deputy commissioner of Badin, said: “We have already stopped fishermen from fishing in this weather. All the disaster management related agencies have also been put on high alert.”

“Things are being monitored round the clock.”

Recalling the catastrophe when floods struck the two districts in 1999, killing 168 people and wiping out 73 settlements, Shah said that thousands of families living on the coastal belt feared meeting the same fate.