David Olson with Boise National Forest said the person was killed Monday when one of the planes crashed. Further details on the death were not immediately available.

Olson said early reports indicated one of the planes was able to land at an airstrip in Landmark and the pilot was able to walk away. He was airlifted to a hospital.

The other aircraft crashed about a mile from the airstrip 30 miles east of Cascade.

The crash caused a small fire.

Two air ambulances, the Valley County Sheriff’s Office and firefighting crews with the Boise National Forest responded to the scene.

Plane crash; 3 are rescued off the coast of Bimini, Bahamas

Three men were rescued after their small plane crashed into the water about 27 miles east of Bimini.

The U.S. Coast Guard said the men took off from Great Harbour Cay in a Cessna 337 Monday morning that was headed to Opa-locka. They were rescued by good Samaritans on board a cargo ship.

The ship carrying the passengers and pilot is arrived in Dania Beach around 2:45 p.m. Monday. The CEO of Seacor Island Lines, which owns the cargo ship, says eight crew members were on board when they spotted the plane go down about four miles away from them.

Local 10’s Andrew Perez spoke with the three victims. Ernie Martin, who is a 15-year-veteran pilot from Miami said he was heading back to South Florida from vacationing in Great Harbour Cay with his two friends, Javier Avino and Daniel Puig.

According to Martin, one of the engines failed so he decided to divert to Bimini. Soon after, the second engine on the plane failed. Martin says he spotted the ship nearby so he decided to make a soft landing a couple of miles from it.

Miraculously, all three of the men on board the plane survived and are doing well.

By now, most of Ohio have heard about the West Nile virus but since July 4 there have been about 50 cases in the United States of a disease called chikungunya.

Two of those people were diagnosed in Ohio and infectious disease experts say that the mosquito that carries the disease is in the Tri-State.

Symptoms of the disease include fever and joint pain, headaches, muscle pain, joint swelling or rash and start three to 7 days after a bite.

And there is no cure once the virus strikes, just a need for patience, plenty of rest, fluids and ibuprofen.

Dr. Carl Fitchenbaum a professor of clinical medicine at the University of Cincinnati’s medical school says as always people should make efforts to protect themselves.

He suggests avoiding times at dawn and dusk when mosquitoes are most active, wear long sleeves or mosquito repellant.

And even if the disease isn’t in the area yet, being prepared will prevent discomfort, as Lucy England knows. Her four-year-old son was bit multiple times days ago.

“We were at my mom’s house,” England said. “She lives in Mount Healthy and she he was out around dusk and he got about six bites on each leg and woke me up in the middle of the night crying because these bug bites itched so badly.”

Two Mississippi River bridges closed due to flooding, and with more storms in the forecast, there was growing concern Monday that conditions could worsen in parts of Missouri and Illinois.

The Champ Clark Bridge at Louisiana, Missouri, closed at 5 p.m. Sunday, creating an inconvenience for those who travel between Missouri and Illinois on U.S. 54. The next nearest bridge is in Hannibal, Missouri, 35 miles to the north. The river is expected to crest nearly 10 feet above flood stage in Louisiana on Tuesday, but it could be the weekend before water is off the road on the Illinois side of the crossing.

The Quincy Memorial Bridge in Quincy, Illinois, shut down Monday morning. The impact there wasn’t as severe because Quincy — with 41,000 residents, the largest Mississippi River town between Davenport, Iowa (population 100,000) and St. Louis — has two bridges. Illinois Department of Transportation spokeswoman Paris Ervin said all traffic is being routed to the Bayview Bridge, which sits higher than the Memorial and is not threatened.

Water levels on the Mississippi shot up in the past couple of weeks due to a series of strong storms in the upper Midwest. Flooding has closed roads and swamped thousands of acres of farmland in Iowa, Illinois and Missouri.

The river was starting to drop in Iowa towns including Burlington and Keokuk, but still rising in Missouri and Illinois. Crests — in some cases 10 feet above flood stage — were expected this week.

But more rain was on the way, this time in northern Missouri, potentially adding water to the Mississippi just north of St. Louis. This could cause an increase in the Missouri River, which is currently below flood stage. National Weather Service meteorologist Mark Fuchs said 2 inches of rain or more were possible Monday night and Tuesday morning.

“It’s definitely getting into the realm of major flooding, no question about it,” Fuchs said. “If the Missouri does go up into flood stage, that will aggravate things from St. Louis to points south.”

The Missouri flows into the Mississippi north of St. Louis, and the river widens. For now, the Mississippi at St. Louis is expected to crest 2 feet above flood stage on Sunday, causing little damage. But if the flood worsens, work along Memorial Drive that is part of the effort to revitalize the area around the Gateway Arch could be delayed.

Route 79 was closed near Clarksville, Missouri, where out-of-town volunteers and inmates from a nearby prison joined local residents in building a sandbag wall. By Monday morning, 95 percent of the wall was complete, Missouri State Emergency Management Agency spokesman Mike O’Connell said.

Clarksville, a tiny town known for its scenic river view and assortment of artist and craft shops, is a popular day destination for St. Louis area tourists. The town has no permanent flood protection.

Homes and businesses were threatened in another tourist town, Grafton, Illinois, north of St. Louis, where the Mississippi is expected to reach 9 feet above flood stage on Saturday.

The wet start to summer continued Sunday in western Michigan, where storms with winds estimated at more than 80 mph damaged homes and businesses. The National Weather Service said a possible tornado touched down briefly south of Grand Rapids. Injuries were reported, but the severity wasn’t immediately known.

Flash flood warnings were in effect in several Michigan counties.

A super typhoon with the strength of a Category 4 hurricane is on a path for Japan — and it is forecast to get even stronger as it nears the islands.

Super Typhoon Neoguri, the third typhoon of the 2014 Western Pacific season, had winds of almost 155 mph on Monday with gusts up to 190 mph, according to the Joint Typhoon Warning Center. That’s close to Category 5 status on the Saffir-Simpson scale used in the U.S.

Neoguri is the strongest typhoon of 2014 in the Western Pacific so far.

Hurricanes, cyclones, and typhoons are all the same thing; scientists just call them different names depending on where they occur.

Neoguri is moving northwestward over very warm water, and is expected to strengthen more as it gets closer to Japan.

The path of the storm will take it near Okinawa, Japan.

Neoguri’s rain bands could be seen approaching the islands on Monday morning on radar, and winds were already picking up.

Neoguri is not expected to hit Okinawa directly, but it will be close enough to do substantial damage to the area, which includes the U.S. Kadena Air Base.

Brig. Gen. James Hecker, the 18th Wing Commander, posted a message on the base Facebook page Sunday saying “this is not just another typhoon” and stressing personnel to take it seriously.

“I can’t stress enough how dangerous this typhoon may be when it hits Okinawa. This is the most powerful typhoon forecast to hit the island in 15 years,” he wrote.

Neoguri is even attracting attention from space: 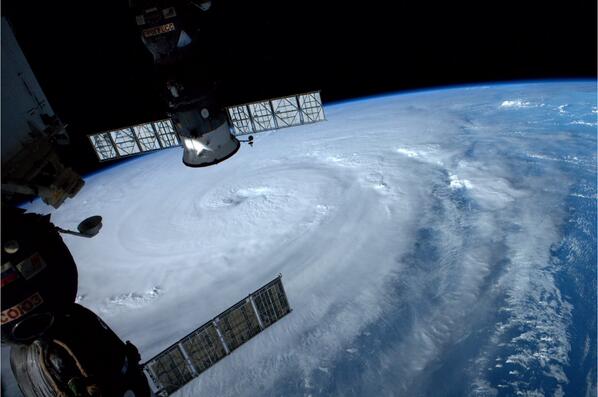 So what is a super typhoon?

According to NOAA’s Hurricane Research Division, a super typhoon is defined as a storm that has maximum sustained 1-minute surface winds of at least 150 mph.

That’s the equivalent of a strong Category 4 or Category 5 hurricane based on the Saffir Simpson wind scale used in the U.S. by the National Hurricane Center.

The JTWC’s forecast has Neoguri’s winds reaching 165 mph with gusts to over 200 mph — making it the equivalent of a Category 5 hurricane.

After its brush with Okinawa, Neoguri is expected to weaken a bit before it hits the Japanese island of Kyushu, home to the city of Nagasaki, late Wednesday or Thursday.

Tokyo is expected to escape the worst of Neoguri but will still be soaked by some rain later in the week, according to AccuWeather.com.

Tropical storms develop throughout the year in the Western Pacific, but May through October is typically the busiest period.

This was caused by the increased risk of flooding due to heavy rains. Only for one hour 70 millimeters of rain fell in the region on Monday morning, RIA Novosti reported.

At the end of last week in the city of Nagasaki the record number of rainfall per hour over the last 50 years detected – 96 millimeters. The heavy rains are expected to last in Kyushu until mid afternoon. 180 millimeters of rain is forecasted to fall in the North until Tuesday morning, in the South – about 120 millimeters.