A popular road through Yellowstone National Park was shut down on Thursday when the asphalt started to melt.

That same thermal heat melting the road is what gives the park its famous geysers, hot springs, mudpots and fumaroles. But for the moment, some of these natural wonders will be off-limits as officials ask both motorists and hikers to avoid the area.

“There are plenty of other great places to see thermal features in the park,” Al Nash, another Yellowstone spokesman, told The Associated Press. “I wouldn’t risk personal injury to see these during this temporary closure.”

The park says the road will remain closed for several days, but no re-opening date has been announced.

Rounds of thunderstorms, including severe weather, will affect the Midwest this weekend into Monday, ahead of a push of unseasonably cool air.

While the effect of the July sun and warm landscape will cancel some of the cool air, it will become surprisingly cool during what is typically the hottest time of the year.

According to AccuWeather Meteorologist Carl Erickson, “The pattern is reminiscent of a major polar plunge that occurred this past winter, which was referred to as the Polar Vortex.”

A piece of the Polar Vortex, and a summertime version at that will break off from the Arctic and drop southward this coming week.

The pattern will not bring snow or sub-zero cold but it will bring angry clouds, cool air and the risk of waterspouts over the warmer portions of Great Lakes.

The pattern will deliver multiple days with high temperatures in the lower 70s in Chicago and Detroit and even a day or two with highs in the 60s in Minneapolis and other parts of the Upper Midwest.

For fans heading to the All-Star Game at Minneapolis, the it may seem more like football weather. Jackets and long sleeves may be needed by many fans to stay comfortable.

At night, temperatures could challenge record lows from the Midwest. Temperatures will drop into the 50s at night in many cities and will dip into the 40s in some of the suburbs and rural areas.

The cooler air will move in aloft before reaching ground level. As this happens, an unstable atmosphere will trigger episodes of thunderstorms, some of which will be severe in parts of the region.

The first episode will fire over portions of the northern and central Plains to the Upper Midwest into Friday.

On Friday, the storms in parts of eastern Wyoming and from northeastern Colorado to Nebraska, Iowa and Minnesota will bring the potential for damaging wind gusts and large hail.

On Saturday, the severe weather threat will shift eastward and southward over the Central states. The storms are forecast to extend across portions of Iowa, Illinois and southern Wisconsin.

Once again, the major threats will be damaging wind gusts and hail.

The severe storms spanning Saturday into Sunday could reach the metro areas of Omaha, Nebraska, Des Moines, Iowa, Chicago, and Detroit with the risks of power outages, property damage and travel disruptions.

Sunday and Monday, the threat of severe weather will continue in portions of the Ohio Valley and will ramp up in the Northeast. The greatest threats these days will be damaging wind gusts, flash flooding and frequent lightning strikes.

After the cool air takes root in the Midwest during the early and middle portion of next week,waterspouts will be a threat to boaters, fishing and beach interests over the southern portion of the Great Lakes.

A plane crash in eastern Mexico has killed four people and injured two others, local authorities said today.
The wreckage of the small Cessna aircraft was discovered Thursday in the town of Alto Lucero, civil protection official Carlos Martinez told reporters.
Inside, rescuers found four bodies, he said. Investigators are probing what caused the crash.
The aircraft, bound for the port city of Veracruz for a fishing contest, had taken off from the northeastern state of Tamaulipas, bordering the United States.
http://tinyurl.com/oubfuw4
July 11, 2014

The pilot of a private plane was killed and a passenger was critically injured Friday when the plane crashed into two homes near the Greenwood airport.

The plane went down on Patterson Street, just north of Main Street, and burned in the back yard of the second home that was struck.

The plane went down about 2:15 p.m., scraping the top of a house before hitting the back of a second home and bursting into flames.

The pilot was pronounced dead at the scene. Neighbors were able to pull the co-pilot from the plane as it burned.

That person was taken to Methodist Hospital and was said to be in critical condition.

A couple of residents reported they were slightly injured by some downed power lines, but officials said they are not seriously hurt.

The plane apparently lost power shortly after takeoff at Greenwood Municipal Airport, which is just west of Interstate 65 and south of County Line Road.

Amanda Siefert, a nearby resident who heard the crash, said her 8-year-old daughter was playing in a tree house and saw the plane go down.

“What (my daughter) told the detective was the plane came over the tree house, and there was smoke coming out of the front, and it teetered and swayed, and then it just dove.”

According to FAA records, the plane is a Mooney M20 single-engine aircraft registered to a Greenwood resident.

Police said the plane was en route to another state for an inspection.

The identities of the victims weren’t immediately released. 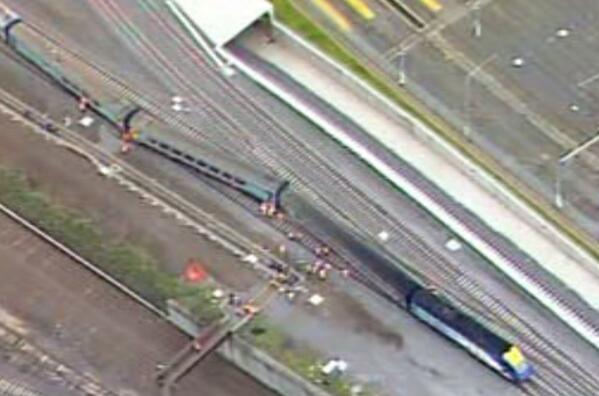 All Albury bound passengers continue to be be put on buses, while investigators continue to look at the cause of the incident, which saw two carriages came off the tracks of a Sydney-bound train that left Southern Cross station at 8.30am.
The Geelong and Traralgon lines will run without any disruptions, a V/Line spokesman said.
Trains running on the Metro line will also be unaffected.
About 180 passengers were transferred to buses after the CountryLink train derailed.
Staff helped passengers off the train and there were no injuries.
Delays are expected on regional and interstate trains.

Tropical Storm 09W is still expected to pass very close to Guam this morning. As of 1 a.m., the center of the storm was located near 13.2 degrees north and 145.5 degrees east, or 55 miles east-southeast of Guam. It is moving west-northwest at 17 mph. Maximum sustained winds remain at 40 mph. The island remains in Condition of Readiness 1.

Guam residents are bracing for a tropical storm that is expected to come over the island early Saturday morning.
The island is currently in Condition of Readiness 1, which means that damaging winds are expected within 12 hours.
http://tinyurl.com/ogrqhv5
July 11, 2014

A bright object that dazzled in the sky over Australia left people confused. Social media was abuzz with the pictures of the mystery fireball, with users claiming it was either a plane crashing into the ocean or a ‘meteor.’

A round object with a burning tail was spotted in the sky over Victoria, NSW, Tasmania and South Australia at about 9:45pm local time on Thursday night.

“A number of pilots reported it to air traffic controllers (and said) it was just a spectacular sight of a meteorite entering the Earth’s atmosphere,” he said.

The “light show” lasted for around 30 seconds, but eyewitnesses were fast to post pictures and start speculating online about what the object could be.

Some of them claimed the fireball was a meteor and others suggested it might have been a plane on fire.

“We received numerous emergency calls from people concerned,” Country Fire Authority spokeswoman Andrea Brown said, according to Herald Sun. “People believed they had witnessed an aircraft crashing into the sea.”

Astronomers quickly dispelled all guesses and said the mystery meteor clearly had signs of a man-made object.

“The images I’ve seen show a lot of different colors,” Astronomical Society of Victoria president Ken Le Marquand told AAP. “When you get lots of colors, it usually means there are different materials in there – man-made materials,” he said.

The Nobel Prize winning Australian National University Astronomer Brian Schmidt concluded that “our fireball may well have been a piece of space junk.”

Schmidt’s assumption was supported by Monash astronomer Dr. Michael Brown, who said that “space junk crossed my mind, too.”

Sydney observatory astronomer Melissa Hulbert made things more clear, saying that what was believed to be a meteor was more likely part of a Russian satellite launched from Kazakhstan.

“It looks like it was the upper-stage of a Soyuz’s rocket that was launched a few days ago,” Hulbert said.

“It’s kind of like the Apollo mission,” she said. “Parts would be dropped off at various points throughout the mission.”

According to the local Merimbula News Weekly, the Satview Tracking Satellites forecasted space junk to re-enter the earth’s atmosphere on the night of July 10 and July 11.