Half of Romania under heatwave warning until Tuesday

Meteorologists issued a warning that states weather will be extremely warm in all the regions and locally canicular during the afternoons, especially in the eastern half of Moldova, Dobrogea and most of Muntenia until Tuesday.

During the afternoons, especially in aforementioned regions, the thermometers will register temperatures as high 36 degrees Celsius and isolated even 37 degrees. The temperature-humidity index (ITU) will reach and surpass the critical threshold of 80 in the plain region.

On Tuesday, the weather will remain extremely warm with maximum temperatures of around 35 degrees.

According to the two-week forecast from last week, there is a high probability of rains returning in the August 5-10 interval.

Tropical Storm Bertha affected the Dominican Republic today with heavy rains that flooded several communities in the east and felling trees in Santo Domingo, according to a preliminary report by the authorities.  The Emergency Operations Center (COE) maintained a tropical storm warning and alert levels, high, moderate and low for 15 provinces. The agency reported that the precipitation caused the overflow of the Soco River in the province of San Pedro de Macoris.

The flooding in Dominican Republic has caused the isolation of the communities of Lima, Campiña, Cabeza de Toro, Concho Primo, Atilano 1 and 2 . The rains also left the villages of Arroyo Grande and  La Cuchilla in Seibo (east) without communication, while in San Cristóbal (south) at least seven houses were flooded in the Moscow neighborhood. Authorities believed that although center of Bertha has moved away the rains can still cause more floods.

A yellow alert (moderate) was given to the districts of San Pedro de Macoris (east), Duarte (northeast), Monte Plata (southeast), the National District and Santo Domingo province (south). Five other provinces are under the (minimal) green alert. Dominican weather and relief authorities claim that the effects of Bertha will affect the northeast, southeast, southwest and north of the country during the next 36 hours. People should refrain from crossing rivers, creeks and streams.

Over 360 people were killed and 1,900 injured after an earthquake measuring from 6.1 to 6.5, according to different estimates, toppled buildings in Chinese Yunnan province.

The majority of the dead were from Ludian county, which Chinese state television said was at the epicenter of the quake.

At least 1,300 people also from the county have been injured and 181 remain missing, Yunnan’s information bureau reported.

The province’s seismological bureau said that another 49 people died and 102 were injured in Qiaojia county.

There are also reports saying that the death toll has reached 230 by early Monday morning local time.

The US Geological Survey has estimated the quake at 6.1 on the Richter scale, while previously reporting the strikes measuring 6.3. At the same time, the China Earthquake Networks Center said the magnitude of the quake was 6.5.

The quake struck at a relatively shallow depth of 10 kilometers, according to USGS.

“I felt a strong jolt on my fifth-floor home and some small objects in my home fell off the shelves,” a resident of Ludian told official Xinhua News Agency.

The quake toppled and cracked apart buildings, forcing people to rush into the streets.

About 12,000 homes collapsed in Ludian county, where some 429,000 people live and that is located around 366 kilometers (277 miles) northeast of Yunnan’s capital, Kunming. 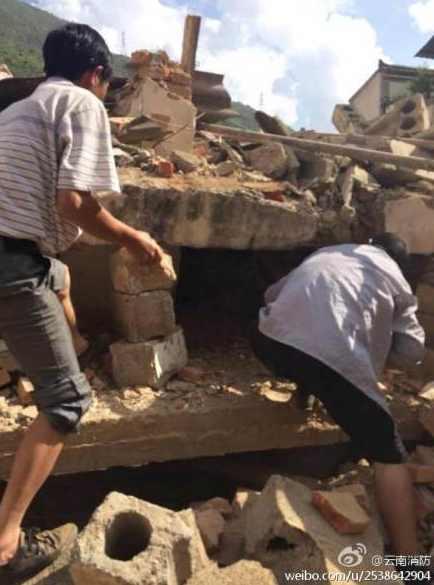 “The aftermath is much, much worse than what happened after the quake two years ago,” Ma Liya, a resident of Zhaotong said. “I have never felt such strong tremors before. What I can see are all ruins.”

Local media is reporting that a school was reduced to rubble, among other buildings that were destroyed by the earthquake.

The Red Cross Society of China allocated quilts, jackets and tents for those made homeless by the quake, while Red Cross branches in Hong Kong, Macau and neighboring Sichuan province also sent relief supplies, AP reported.

Yunnan’s seismological bureau has said that the earthquake is the strongest to hit the province in 18 years, independent website Earth-Quake Report said. Yunnan is one of the most earthquake-sensitive provinces in China. 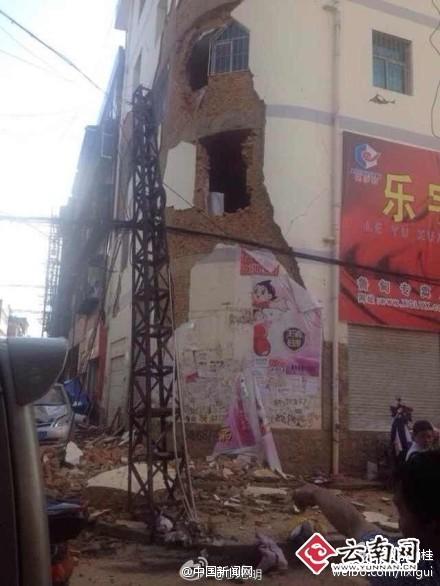 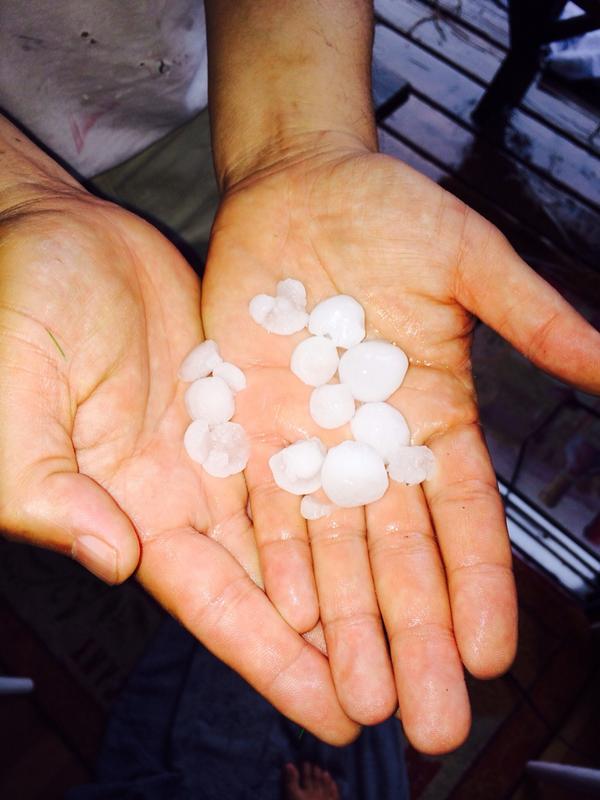 No kidding. In fact, maybe the forecast should have read, “occasional, quick and Giganto-size hail.”

Shortly after 5 p.m., the Central Oregon city was warm and sunny and then all hell broke loose.

The good news for Bend residents, who have been living through so-called “fire weather” with thunderstorms and lightning strikes during the past two days, is that the skies are expected to clear up and calm down, with temperatures falling to the lower 60s after midnight.

A band of severe storms in the San Bernardino County area led to a 14-car crash on Interstate 40 and left dozens of cyclists stranded on an 8,400-foot-high peak, authorities said.
A series of wind gusts created a dust storm along a stretch of Interstate 40 near Newberry Springs at 10:18 a.m., leading 10 tractor-trailers and four passenger cars to collide there, said Capt. John Wilkins, public information officer for the San Bernardino County Fire Department.
“It literally went to zero visibility, units on scene couldn’t see each other once they arrived,” he said.
Nine people were taken to area hospitals with minor injuries, and a stretch of I-40 was shut down for nearly two hours, Wilkins said.
Two hours later, a group of about 40 cyclists competing in the Tour de Big Bear became trapped on the Onyx Summit, an 8,443-foot peak, when a storm band came  through the area around 12:30 p.m., Wilkins said.
Riders complained of hypothermia and severe cramping, but rescue teams were able to transport them back to the starting line.
No one was seriously hurt or hospitalized, and roughly 2,000 riders completed the course, Wilkins said.
http://tinyurl.com/llcajnw
August 3, 2014

How To Cope When Everything Falls Apart