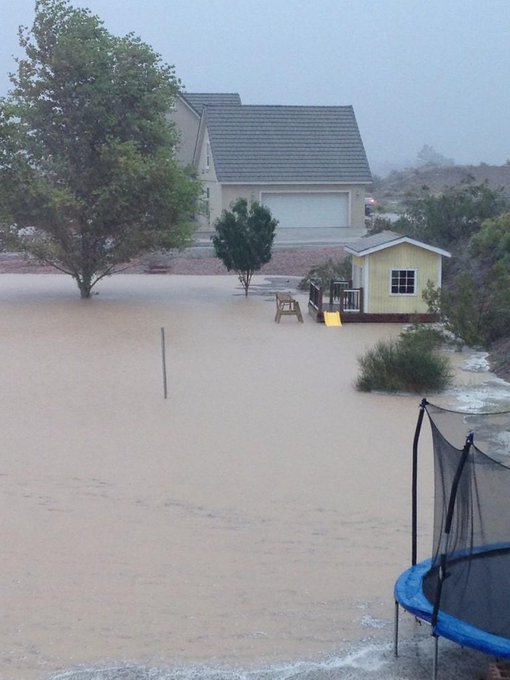 Record rain produced dangerous flash floods that swamped freeways and residential areas in the Las Vegas, Phoenix and Tucson metropolitan areas on Monday. At least two people are dead in southern Arizona after being trapped in flood waters.
In Nevada, life-threatening flash flooding was reported in Moapa, about 45 miles northeast of Las Vegas on Monday afternoon. The National Weather Service declared a flash flood emergency for the area.
The National Weather Service in Las Vegas said at one point that a dam in the community was within inches of overtopping, but waters receded later in the evening. The Nevada Highway Patrol said on Monday evening that vehicles were floating down Interstate 15 in the Moapa area. The freeway, which links the Las Vegas area with San Diego to the south and Salt Lake City to the north, was closed near Moapa. Images on social media showed whole sections of the I-15 freeway destroyed. 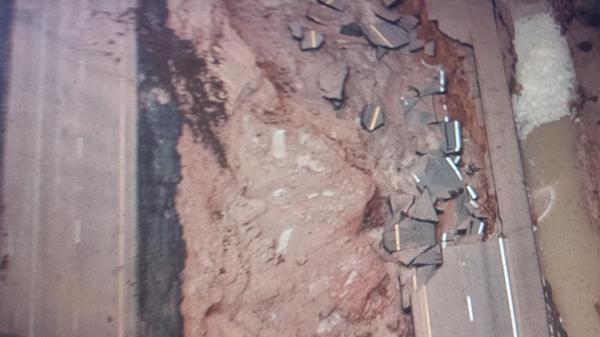 Highway crumbles away – This is not a Hollywood movie – This is real
Red Rock Search and Rescue/Recovery, a non-profit search and rescue team based in Las Vegas, said near mile marker 92 in the Moapa area. The northbound lanes were “nearly gone as well,” the organization said.
A Clark County rain gauge upstream from Moapa reported 4.67 inches of rain Monday, more than two-thirds of the average annual rainfall for that area. 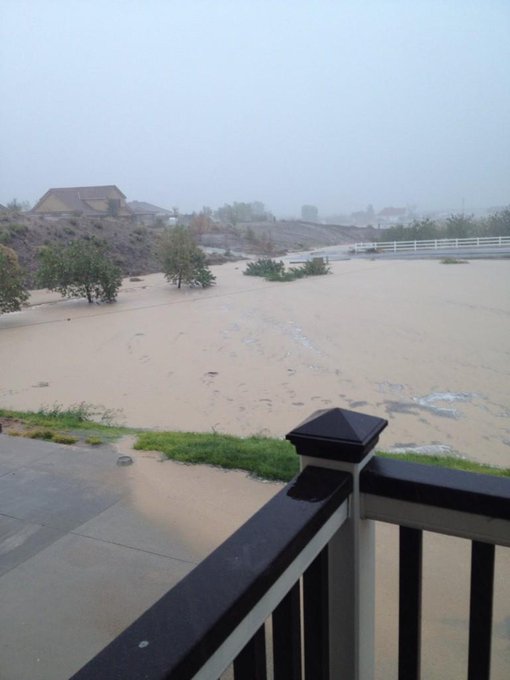 “The richest plume of moisture from former Hurricane Norbert is pointing straight north through the Lower Colorado River Valley and into southern Nevada. Rainfall has been wildly variable but over 1 inch of rain fell in a short time in the southwest part of the Las Vegas Valley Monday,” said weather.com meteorologist Nick Wiltgen. “More troubling were the storms northeast of the city; one gauge reported 2 inches of rain in 30 minutes north of Moapa. This is an extreme amount of rain for a desert environment. NOAA estimates this type of rainfall should happen once every 500 to 1,000 years in that area, assuming no climate change.”
In the immediate Las Vegas area, repeated heavy downpours put down 1 to 2 inches of rain in many neighborhoods, leading to flash flooding. Late Monday afternoon, at least two parking garages at Vegas hotels were flooded, including the Quad Resort and Casino on the famed Las Vegas Strip.
Arizona Floods Turn Deadly
On Monday morning,  when her vehicle was washed away by 10 to 15 feet of floodwater and pinned against a bridge, according to local television station KVOA-TV.
Just north of Tucson, Pinal County authorities confirmed a second flood-related death Monday afternoon. A 76-year-old woman died when her 69-year-old husband drove their vehicle into the Cadillac Wash near Oracle Junction, Arizona.
The couple escaped their car as it began to take on water after floating down the wash. However, the woman was unable to swim, and was swept away by the current. The car was found an hour later a quarter of a mile downstream; the woman’s body was found an hour after that, a half mile downstream from the flooded roadway.
All 29 miles of Interstate 15 in northwest Arizona were closed late Monday afternoon due to flooding. The Littlefield Fire Department reported “waterfalls flowing onto” the freeway. Traffic was diverted from entering the stretch, which crosses the Virgin River Gorge.

In Phoenix, Mayor Greg Stanton and Arizona Governor Jan Brewer declared a state of emergency, urging non-essential state employees to stay home Monday.
Sections of Interstates 10 and 17 in west Phoenix were closed during the morning commute. A state Department of Public Safety officer used the roof of his SUV to carry three stranded motorists from a flooded area of I-10.
Cars and SUVs sat in water up to their hoods on the freeway, while dozens of motorists parked on its wide, banked borders to stay clear of the water.
One of the hardest-hit stretches, Interstate 10 between 51st and 35th Avenues in Phoenix, was cleaned up and re-opened by around 2 p.m., according to the Arizona Department of Transportation.
Numerous schools were closed due to the weather. APS reported about 10,000 customers without power in the metro area, with flooded roads making restoration a challenge.
Phoenix Sky Harbor International Airport set an all-time wettest calendar-day record, picking up 3.29 inches of rain since midnight as of 4 p.m. MST., breaking the previous record set 75 years ago. This is more than the average rainfall in July, August, and September, combined (2.69 inches), encompassing a typical summer rainy season there.
According to NOAA’s precipitation frequency estimate, this heavy a precipitation event in a six-hour time period has only a 0.002 percent chance of occurring in any given year.
The roof of a Fry’s Marketplace reportedly collapsed in Tempe, and there was a report of an evacuation of an apartment at Arizona State University. One spotter in Chandler, Arizona, measured 5.63 inches of rain as of 10 a.m. MST.
The desert terrain is already incapable of holding several inches of water, but when heavy rainfall hits urban areas in the southwest – developed and covered in concrete, which doesn’t absorb water, either – a catastrophic situation can occur.
The threat is expected to continue through Monday, and the NWS has issued flash-flood watches for parts of five states – California, Arizona, Utah, Nevada and Colorado. Early Monday morning, a large cluster of storms was centered over Arizona, forcing the NWS to issue flood warnings for some parts of the state.
Sunday in southern California, emergency crews responded to numerous reports of vehicles stranded in feet of water, according to the Press Enterprise. Parts of both Interstate 215 and Highway 74 were closed because of water covering the roadways. Caltrans spokeswoman Terri Kasinga told the Press Enterprise that at one point, at least 70 vehicles were stuck after water poured over the guardrails on Highway 243.
The torrential downpours caused , downed trees and snapped power lines in Riverside on Sunday afternoon, the Press Enterprise reports. Images on social media showed cars submerged up to their roofs and floodwaters turning city streets into rivers.
Emergency crews had to rescue several people trapped in their vehicles, but no injuries were reported. NBC Los Angeles reports that were damaged. 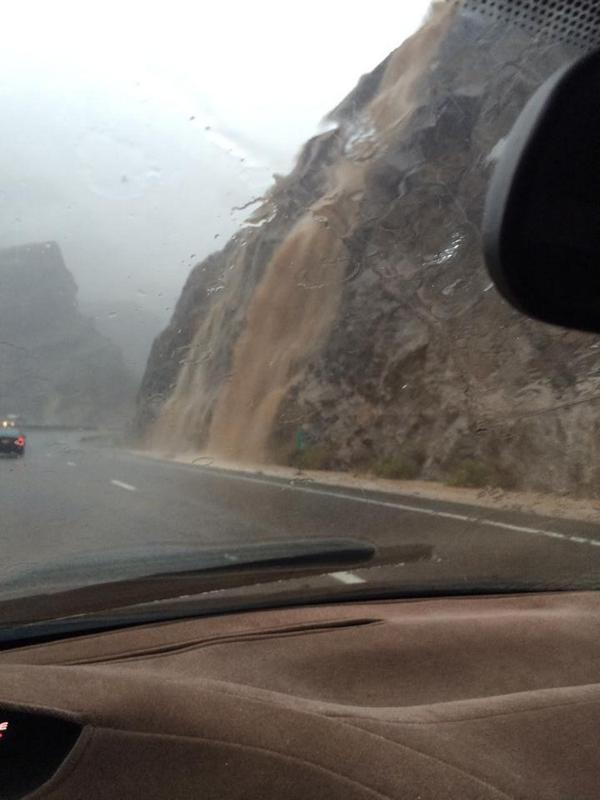 The entire state of California has been in a drought since April, and at least 94 percent of the state has been in drought since May 2013. The Inland Empire region of western Riverside and southwestern San Bernardino counties is in a level-3 “extreme” drought, the second-highest possible category, according to the U.S. Drought Monitor.
The Inland Empire has been in the extreme drought category since April, and some portion of the region has been either abnormally dry or in drought since January 2012.
Despite several rounds of heavy thunderstorms this summer across the region, , Riverside itself has had less than 2.5 inches of rain since Jan. 1. That’s more than 7 inches below the average rainfall for the year to date.
And even though the rainfall brought dangerous flooding, some residents of the drought-parched state didn’t care. They were just happy to see some precipitation.
“It was wonderful,” said Malina Hernandez . “It was like wow, this is how it should be. Pouring, windy, raining. Just pouring down.”
http://tinyurl.com/knq6cf4