Residents of Kookoowe Village, Kassanda sub-County in Mubende District are counting losses after a severe hailstorm coupled with strong winds struck on Friday. The heavy rain left a number of houses with roofs and destroyed some gardens.
http://tinyurl.com/lcxdsgw
September 27, 2014

Seven people were unconscious and eight suffered serious injuries after a volcano erupted in central Japan shortly before noon on Saturday, according to local media.

Ash spewed from the volcano, named the Ontake that straddles Nagano and Gifu prefectures in central Japan, has accumulated about 50 cm at the top of the mountain, said local reports, adding the ash would fall into prefectures of Nagano, Gifu and Yamanashi this evening.

According to footage by Japan’s broadcaster NHK, thick gray smoke has spewed up into sky.

Local fire department said that they have received several emergency calls on injured climbers and about 250 hikers were trapped on the mountain and in a hotel near the top of the volcano.

The JMA is forecasting further eruptions that may affect nearby residents and is warning of large volcanic cinders falling within a 4 km radius of the crater, said Japan’s Kyodo News.

The volcano’s last eruption was in 1979 when it expelled over 200,000 tons of ash. It also went through a minor eruption in 1991 and caused multiple volcanic earthquakes in 2007, reports said. 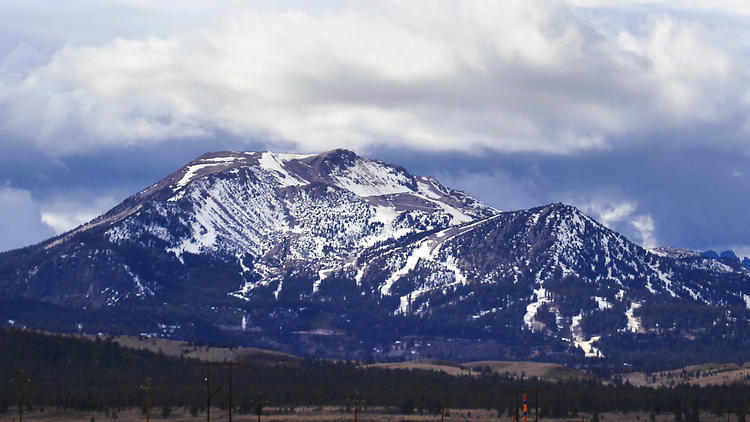 More than 600 small earthquakes have rattled the Mammoth Lakes region in less than 36 hours as ripple effects continued across one of the most seismically active volcanic regions in California, according to the U.S. Geological Survey.
The swarm of quakes — ranging from magnitude 1.0 to 3.8 — began just before 5 a.m. Thursday, according to the USGS.
“This is one of the largest earthquake swarms we’ve seen in the past decade or so,” said David Shelly, a USGS research seismologist who has been studying the volcanic system near Mammoth Lakes. “We’ll be tracking it closely.”
Residents reported periodic rattles through the day but said they were used to the shaking given that Mammoth is a seismically active area.
Earthquake swarms are not uncommon to this region in California’s Eastern Sierra. Countless small faults crisscross the area known as the Long Valley Caldera, Shelly said. This roughly 20-mile-wide crater-like depression, adjacent to Mammoth Mountain, was formed from ash and pumice deposits during a volcanic “super eruption” about 760,000 years ago.
At 11,053 feet, Mammoth Mountain is a lava dome complex on the southwest rim of the caldera and last erupted about 57,000 years ago. The volcanic region is one of the most seismically active in a mostly quiet network of 17 volcanoes throughout California.
The central part of the caldera has been uplifting slowly in recent decades, and these earthquake swarms happen episodically as part of the volcanic and tectonic interactions in the area, Shelly said.
Deep down in the earth, there is magma, but the magma is not what’s moving, Shelly said. The earthquakes are usually triggered when water and carbon dioxide above the magma move up into higher layers of the earth’s crust and into the cracks of the small faults. The increase in fluid pressure sets off the movements.
“It doesn’t mean that the volcano is any more active,” he said. “It’s an ongoing process in an volcanic system.”
The latest earthquakes seem to be occurring in the same location as a swarm in July, when about 200 quakes of magnitude 2.7 or smaller rocked the area.
The size of the most recent swarm was notable, but was not nearly the size of some swarms in the 1980s and 1990s.
In the 1980s, the area was hit with multiple 6.0-magnitude temblors, which were likely overshadowed by the Mount St. Helens eruption in Washington state, Shelly said.
The last larger swarm occurred in 1997, when temblors as high as magnitude 4.9 shook the region. Thousands of earthquakes were part of that sequence, which lasted several months, Shelly said.
There has been no indication that this week’s earthquakes will turn into anything like what happened in 1997. About 109 quakes of magnitude 2.0 or greater have been recorded since Thursday morning, while hundreds of smaller 1.0-magnitude quakes made up a bulk of the activity. At least six were greater than 3.0 magnitude.
By midday Friday, the swarm seemed to be slowing down, but Shelly said scientists would continue to monitor the area closely.
“At this point, we don’t know if it would continue to die down, or if there’d be another stage to this swarm,” Shelly said. “This is certainly an interesting scientific opportunity to better understand the processes that are driving this activity.”
http://tinyurl.com/pm8gzhg
September 27, 2014