Thousands of fish wash up dead, ‘a mystery’ in a river in Gloucestershire, UK

The Environment Agency are investigating the death of hundreds of fish in a Gloucestershire river.
Details are still unclear, but the agency is at the River Leadon near Dymock after reports of pollution.
One eyewitness who did not want to be named said: “There are thousands of dead fish, I have seen salmon and lamprey.”
He said the affected area went down to Hartpury.
A spokesman for the Environment Agency said: “We are at the location and will provide more information as soon as we can.”
Courtesy of gloucestershirelive.co.uk
http://tinyurl.com/h4lb66z
July 28, 2016

Hundreds of fish appeared dead on the banks of the Guadalupe River, at the height of Carolina del Príncipe. The fact was presented yesterday in the hours of the morning.
The tributary was born in Santa Rosa de bears and passes through the towns of Gomez Plata, Carolina of the Prince and Guadalupe and finally empties into the Porce River.
The community attributed the deaths to a possible poisoning, fact is not confirmed. Carolina inhabitants of Prince say that if true the poisoning the situation would not be new, because something similar happened a couple of years ago.
“Is made a call to Corantioquia and they were in send a person to review the area”, explained a spokesman of the community.
Staff of the Secretariat of environment of Carolina was visiting the place, but unaware what caused the environmental difficulty. Similarly, a veterinarian of Gomez Plata attended the situation.
From the Mayor of Guadalupe they are unaware of the reasons for the deaths, but they are investigating what happened.
Courtesy of elcolombiano.com
http://tiny.cc/o7ncdy
July 28, 2016 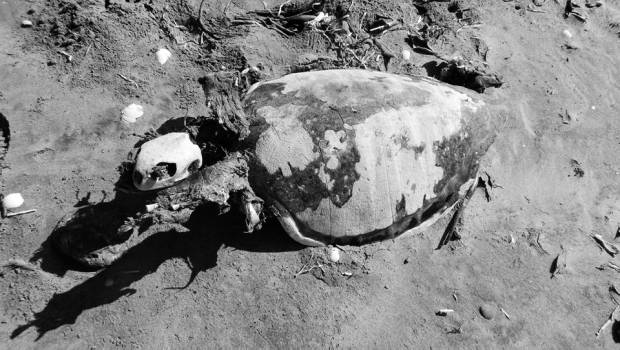 Photo property of: courtesy
In the area was banned fishing to try to verify the influence of the cooperative networks and the chelonian.
Comondú, BCS. Fishermen in the coastal communities of Comondú, next to an inspector of the Federal Attorney for protection to the environment (Profepa), counted 11 corpses of yellow turtle (Caretta caretta) on beaches in the region a few days ago.
The area is related with the Gulf of Ulloa, area in which the authority fishing Mexican not allows to them cooperatives take is to the water to work, because some suspect in the interaction of them networks and the mortality of loggerhead.
“We found 11 turtles, one of them was what we reported yesterday, and mark it so that it is unposted double; “turtle that had little have died, others: some recent, did not have much time to be stranded, and others much more time, we show them a couple of pictures of the tour”, explained Tomás Camacho, technical advisor of the cooperative production fisheries port Chale.
The issue of the death of the chelonian is in check to the Mexican Government, because it caused United States smashed to see practices of fishing in the area, and fear an embargo made the Government of Enrique Peña Nieto took off for four months to fishermen.
Courtesy of sdpnoticias.com
http://tiny.cc/65mcdy
July 28, 2016

Thousands of dead fish wash up on the coast of Mersin, Turkey

Mediterranean district of Mersin Tube and hitting the beach, thousands of dead fish on the beaches of Adanalıoğlu no worries.
Recently in southern sea, indicating that the fish deaths worrying Tarsus Hunters Club Chairman Tufan Dennis, finally Tube and thousands of dead fish that struck the shores of Adanalıoğlu, said it might be sourced from toxic waste.
Investigation in the region and stating that the very grave situation Tarsus Hunters Club Chairman Tufan Dennis, “Mersin’s Bowl and Adanalıoğlu comes with many dead fish from the sea in the neighborhood right now. The coast guard is now pure white dead mullet fish expired. They shot us down to the beach again as usual. The authorities need to take urgent measures to this situation. “he said.
Courtesy of dogruhaber.com.tr
http://tiny.cc/oomcdy
July 28, 2016

17 dead dolphins found on a beach in Mira, Portugal

Dolphins in the sea. Image: Dreams Time
The Portuguese authorities have reported the death of 17 dolphins on the beach of Mira, about 180 kilometers north of Lisbon, after being trapped by “accidentally” in nets of fishermen.
Mira Mayor Raul Almeida, confirmed the death of the specimens, which were found dead Friday, and regretted the incident, despite the precautions that had been taken.
Almeida explained that to avoid such disasters, fishing nets have sensors that emit signals that scare away dolphins, although in this case, the 17 dolphins were unable to flee.
The councilman said that there were 17 of the 150 dolphins that were around those who fell in the nets of fishermen in the boat Alexandre Vieira, a brotherhood of the own locality of Mira, which has about 3,000 inhabitants.
According to related Almeida, Mira fishermen, realizing the facts, rushed to cut the nets in order to save the greatest number of dolphins.
Courtesy of ecodiario.eleconomista.es
http://tiny.cc/tfmcdy
July 28, 2016

Mass die off of fish in the waters of Kien Giang Province, Vietnam

About 10 days, the state of the fish cages of people died in a series appearing in Hon Art Commune, Kien Luong District, Kien Giang Province.
In particular, the number of dead fish are mainly concentrated in grouper stars, fish with high economic value, causing huge losses to the farming economy.
Mr. Lam Minh Hoang, a fish farmer in the village cage Chướng Beach, Hon Nghe commune, Kien Luong district said diseases caused loss of fish in recent days due to scabies fish. Initially on the fish itself appears only a few spots as burns, if the farmers are not detected timely treatment room, only a day or two after the burn began spreading throughout the body leading to fish kills fish.
Currently, although many dead fish, but farmers still do not have effective prevention and treatment measures, only used in accordance with conventional methods as individual bathroom with a drug buy.
Huynh Van Chieu, Chairman Hon Nghe commune, Kien Luong district, said overall in the first 6 months of 2016, more than 147,000 fish cage culture of fishermen died, including grouper star dies over 74,200 children, left a number of other types of fish such as cobia, grouper pearl goby, fish, lobster hybrid …
Dead fish are stocked at most as one to two months. According to estimates, the average price per groupers counterparts around VND40,000 / child, only in the first 6 months. farmers on communal cages Hon Nghe has lost hundreds of millions.
Hon Nghe current commune, Kien Luong district has nearly 1,100 cages with 180 farmers, in the first 6 months of 2016, the cage is already sold more than 167 tons of fish of all kinds.
According to Huynh Van Chieu, Chairman Hon Nghe commune, Kien Luong district, cage fish farming industry has been identified as the focus of the social economy, so before mass death situation, but no treatment effectively, people need early industry survey functionality, guidelines on the prevention and treatment of fish, help fish farming cages brought growing income for fishermen on the island commune.
According to Huynh Van Chieu, in May 4/2014, fish cage culture of the people on communal Hon Nghe died simultaneously with the number recorded over 60,000 children, estimates losses of over 12 billion.
Most recently in May 3/2016, more than 4,000 children cobia cage culture of many fishermen in Ba Lua archipelago, Son Hai Commune, Kien Luong district, also died in a series. Estimated there were more than 10 tons of dead fish, damage more than 1.2 billion.
Courtesy of news.zing.vn
http://tiny.cc/r2lcdy
July 28, 2016