Lorries blown over, thousands of homes left without power and Forth Road Bridge closed as 93mph winds batter Britain – and there’s SNOW on the way – UK 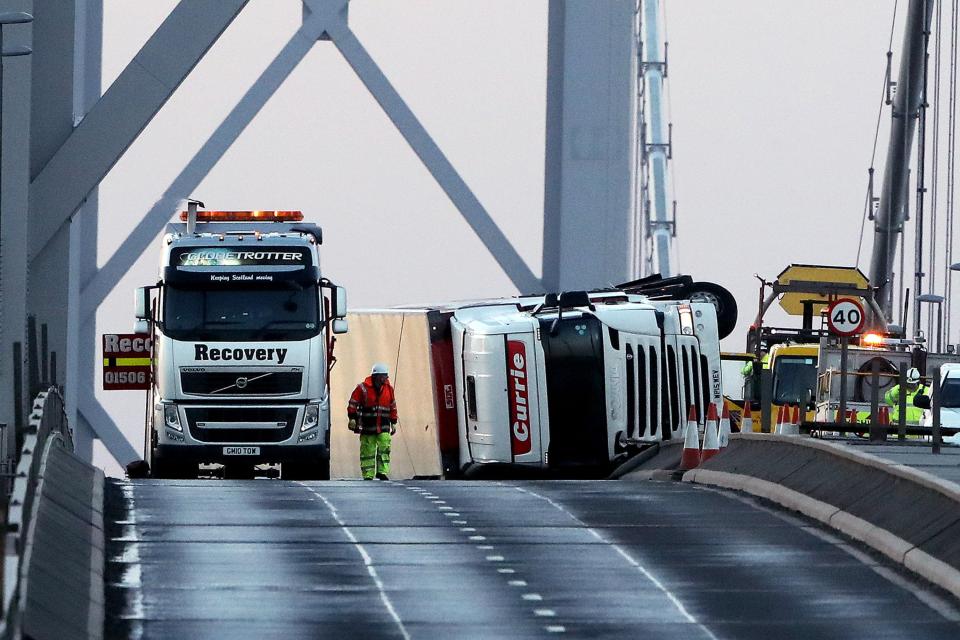 The Forth Road Bridge near Edinburgh has been closed in both directions after a lorry was blown over at around 2am – PRESS ASSOCIATION
GALE force winds are causing misery across Britain with the Forth Road Bridge forced to close, gusts of up to 93mph battering cities and homes across the country left without power.
Dangerous driving conditions are posing problems on the roads – and the Met office has warned snow is now on its way. 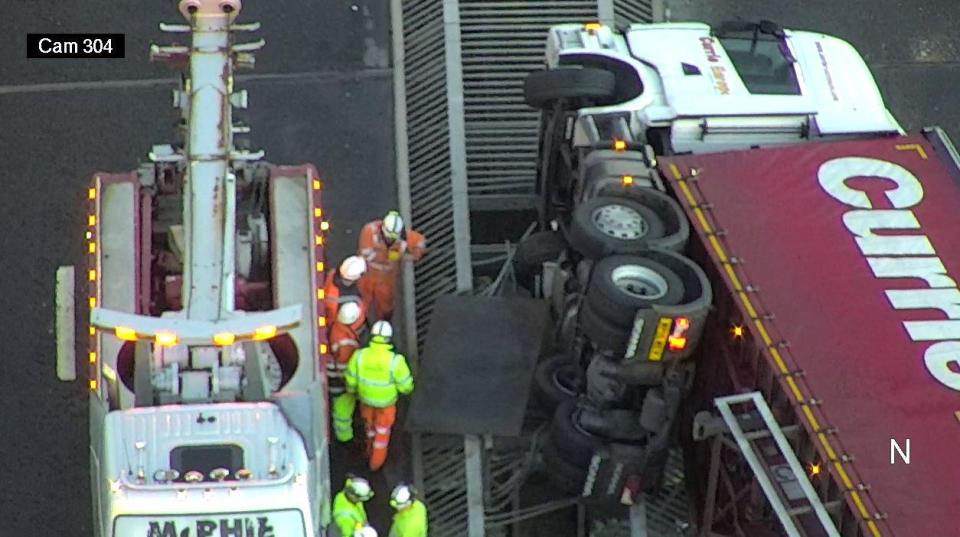 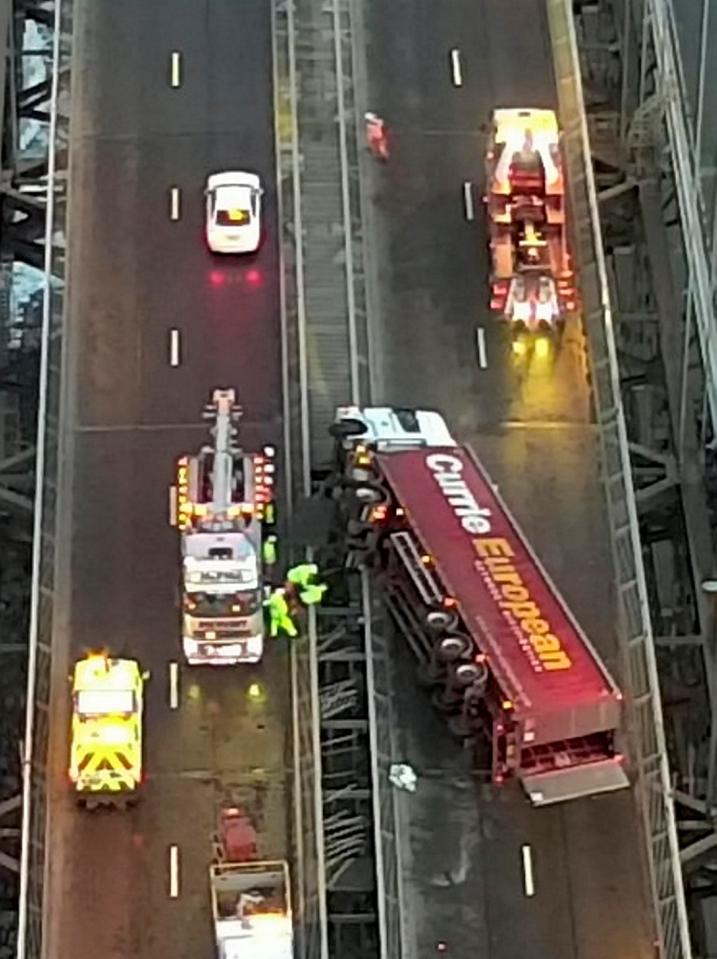 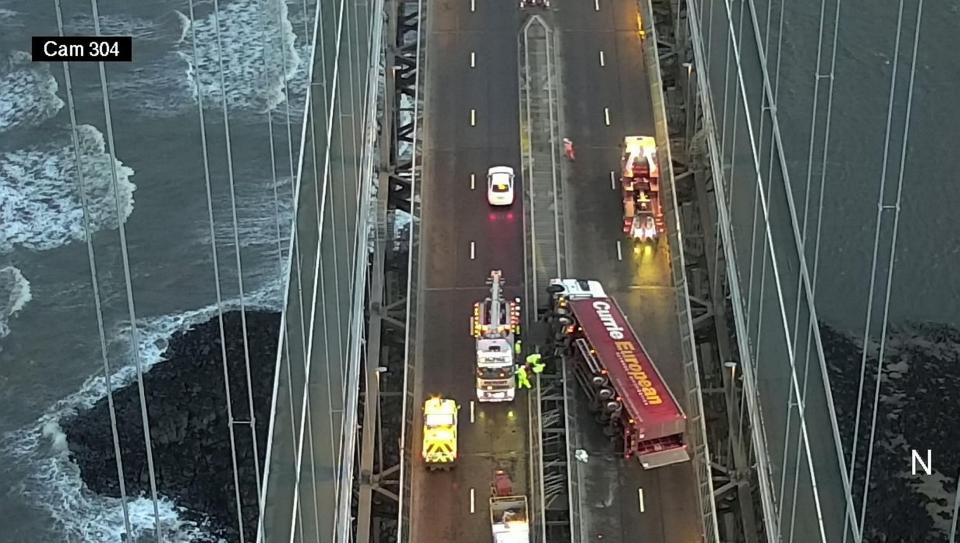 Tricky driving conditions are expected today with gusts of up to 75mph – Southwest News Service
The Met Office issued fresh yellow warnings of snow for much of the south of the UK for tomorrow.
A lorry driver has been charged after his vehicle was blown over in strong winds, leading to the closure of the Forth Road Bridge.
No one was hurt but it is expected to be closed for some time as high winds hamper recovery efforts.
Police said a 54-year-old man had been charged.
Mark Arndt of Amey said: “The bridge is closed in both directions and we are doing everything we can to reopen the route as soon as possible.
“It’s most likely that we’ll be able to reopen one lane of the northbound carriageway later today, however we will need a crane to remove the HGV from the southbound carriageway, and this work is highly dependent on the prevailing wind speeds.
“We are continuing to monitor the forecast and have a team mobilised and ready to respond as soon as it is safe to do so, but it is very likely the bridge will remain closed through the morning peak.
“We know that closing the bridge has a serious impact on people’s journeys and it’s regretful that this situation has arisen.” 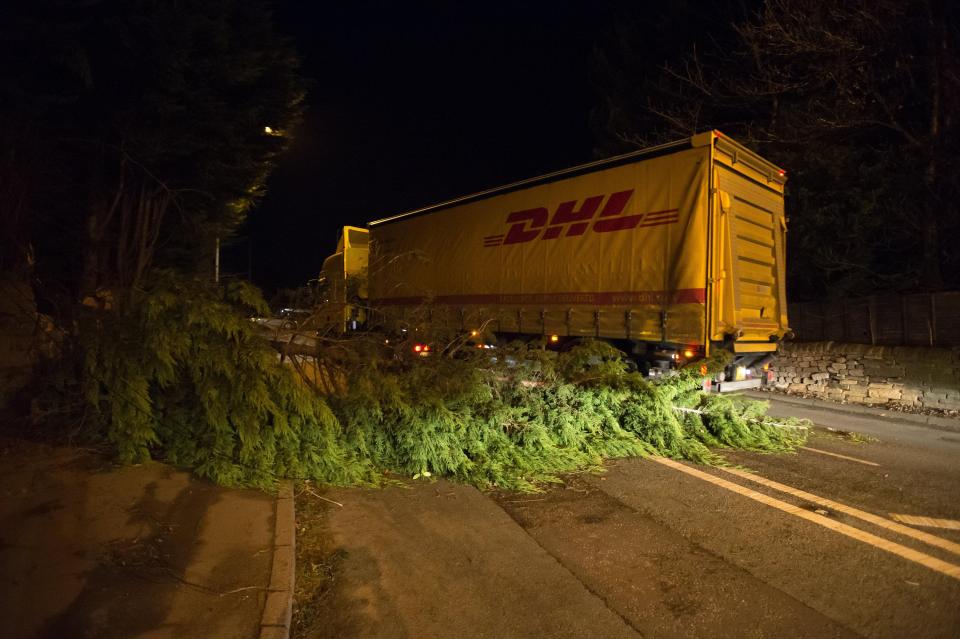 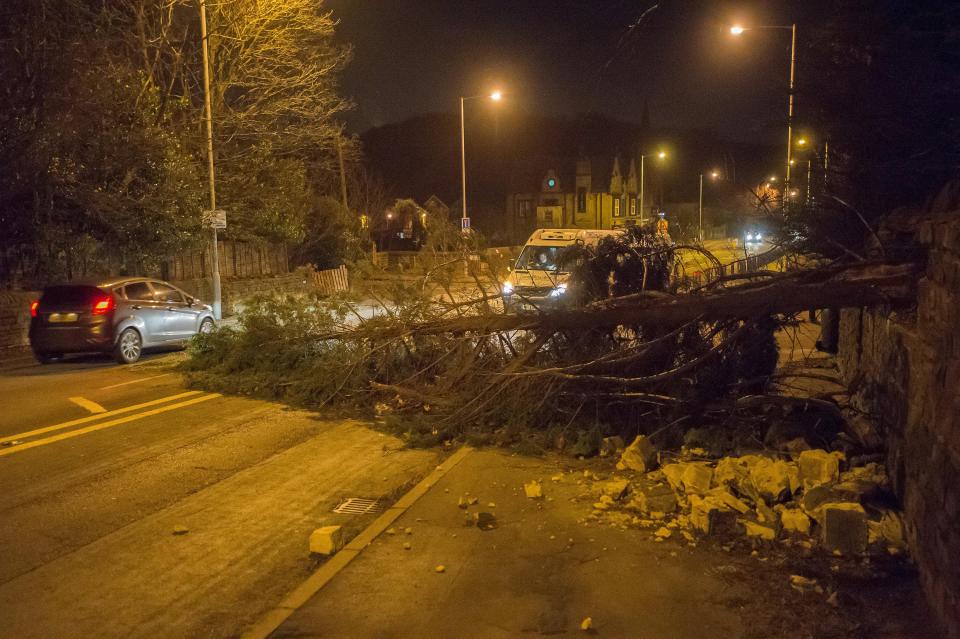 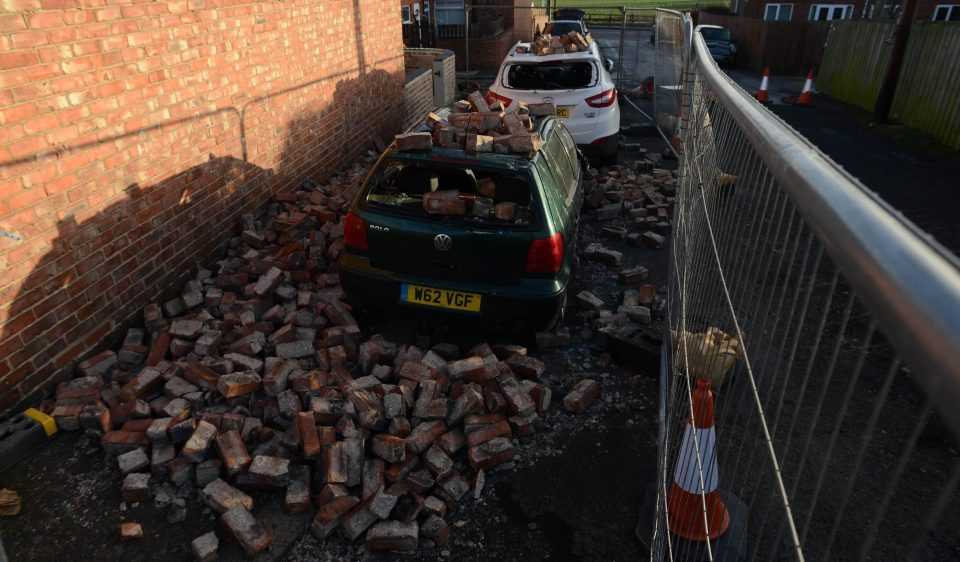 The scene in Ouston, County Durham, where vehicles have been damaged by falling bricks after strong overnight winds caused the end of a house to partially collapse – NORTH NEWS 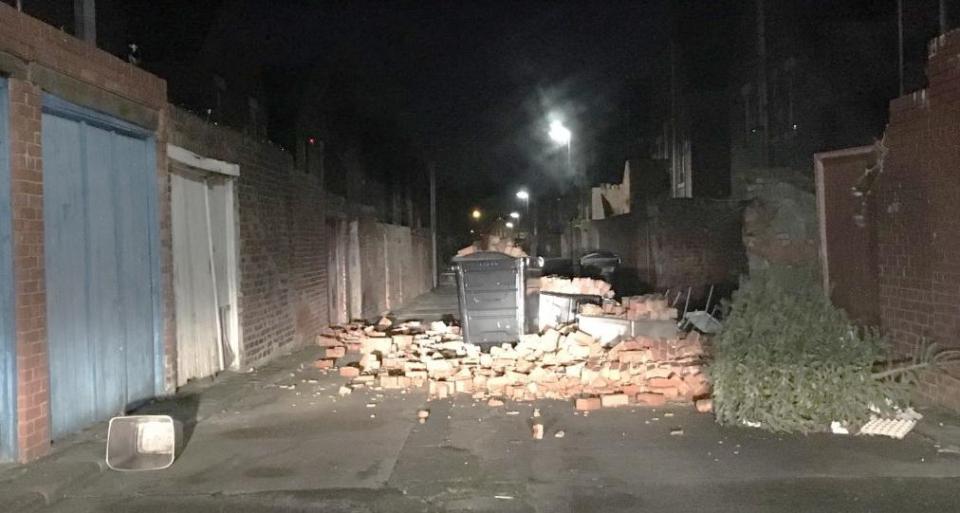 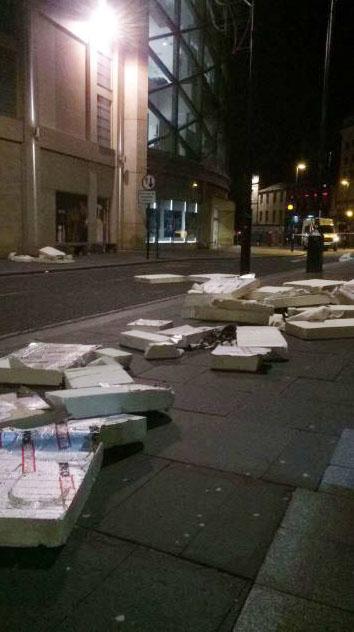 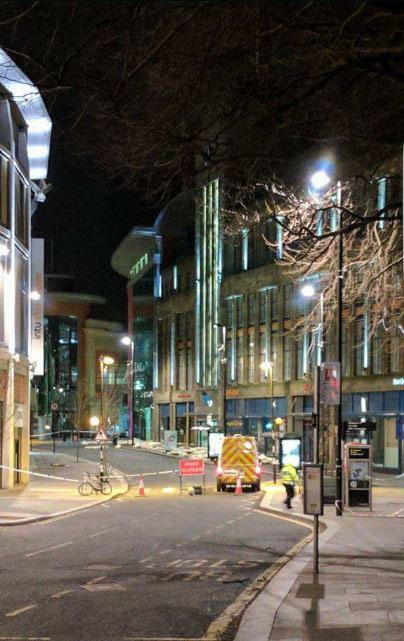 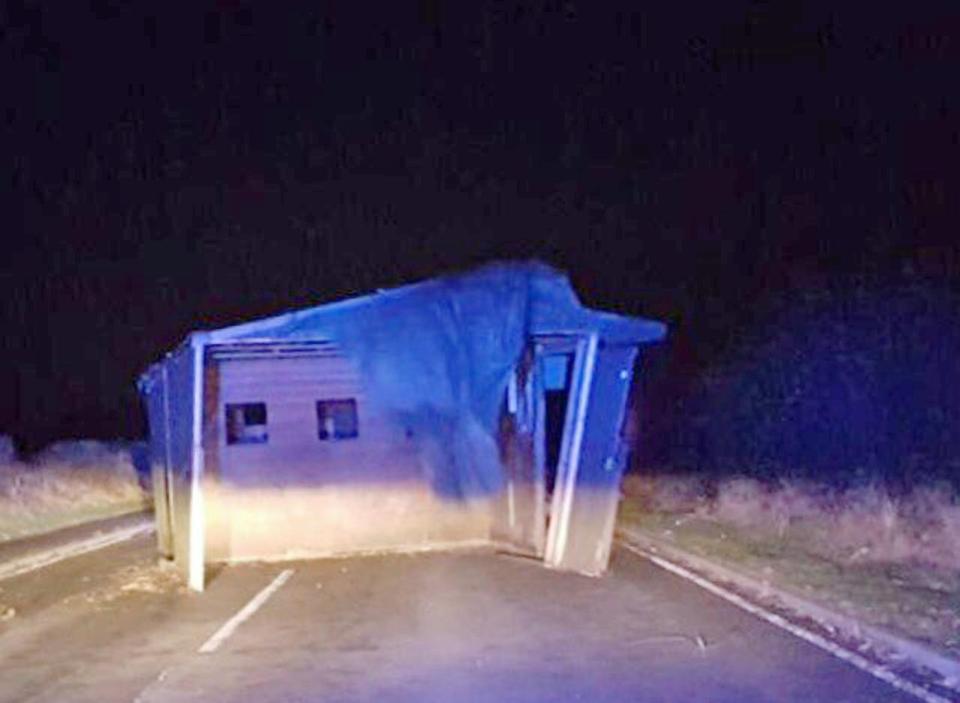 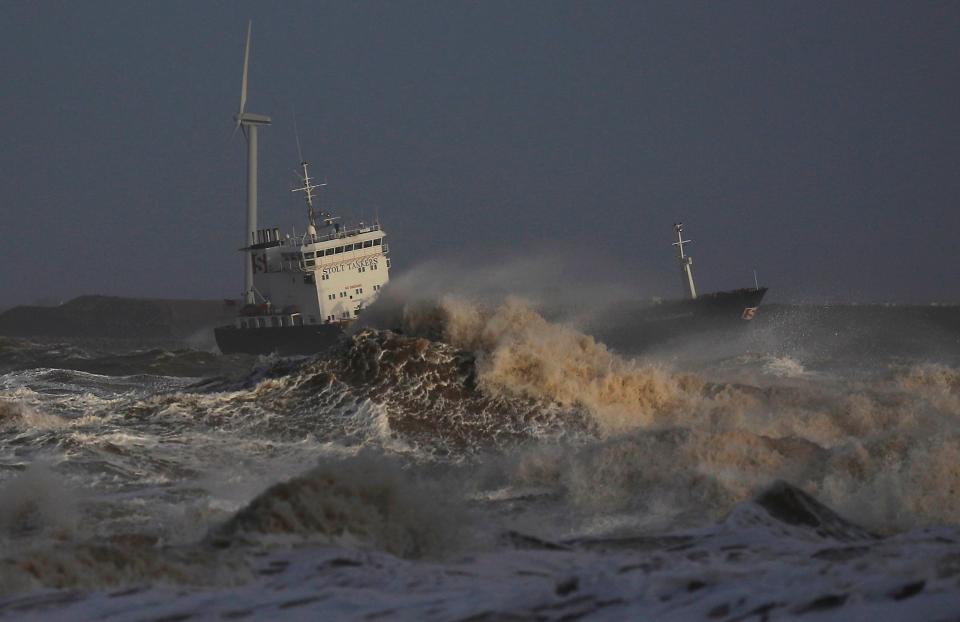 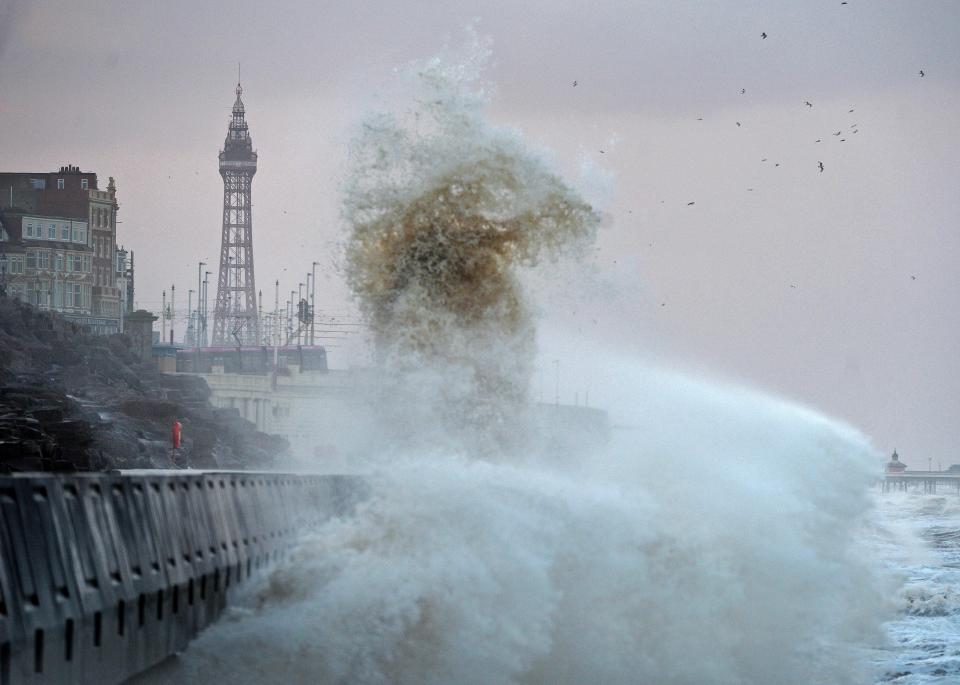 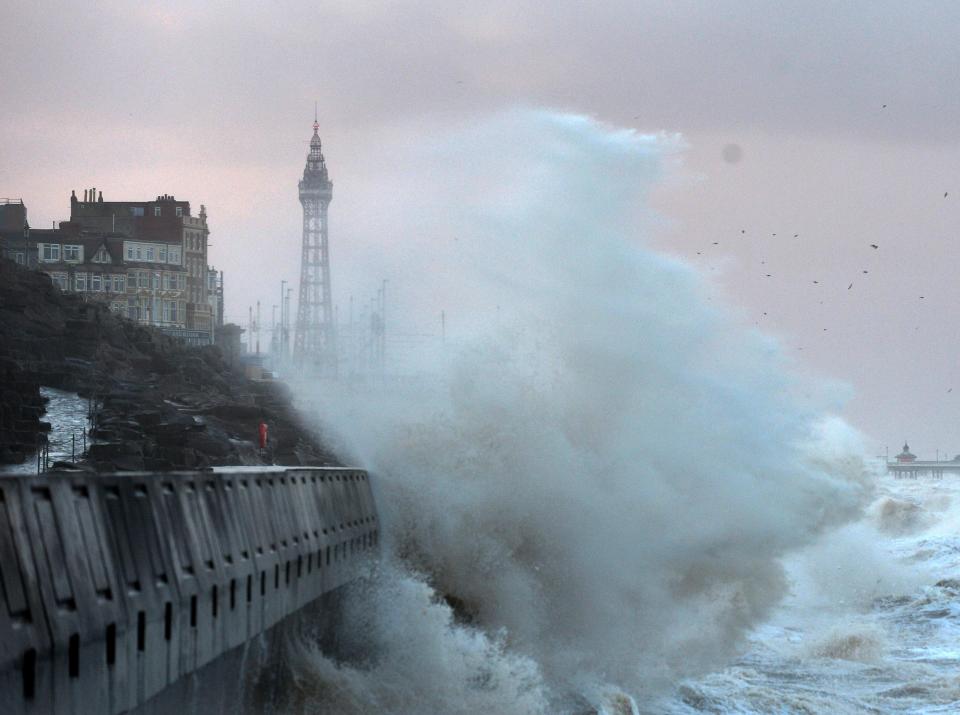 Yellow warnings for high winds and snow have been issued by the Met Office – DNSNAPPER@BLUEYONDER.CO.UK
Yellow-graded weather warnings have been issued by the Met Office, as higher regions brace for the harsh winds and 20cm of snow.
Chief forecaster Dan Suri said: “Snow showers are expected to develop from Wednesday evening lasting into Thursday.
“These, combined with strong winds, could lead to locally very poor travel conditions.
“Be aware of the potential for disruption to transport due to lying and blowing snow.
“Wind gusts up to 55 mph are expected in exposed coastal areas and on hills in association with snow showers, leading to temporary blizzard conditions.
“Two to five centimetres of snow could accumulate anywhere within the warning area with 10 to 20 centimetres possible above 300 metres.
“Lightning may accompany the heaviest showers, with potential disruption to power supplies as a consequence.” 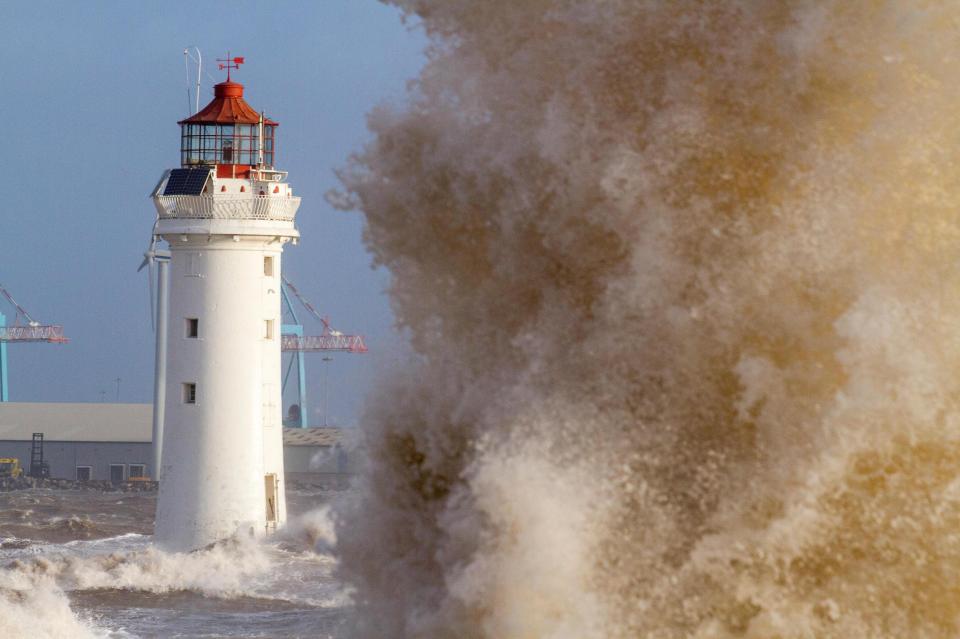 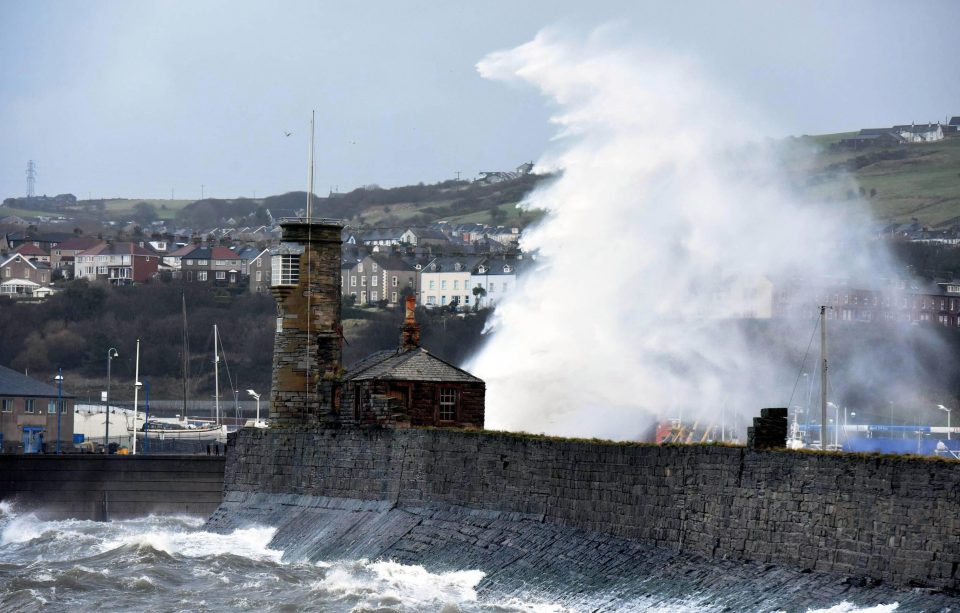 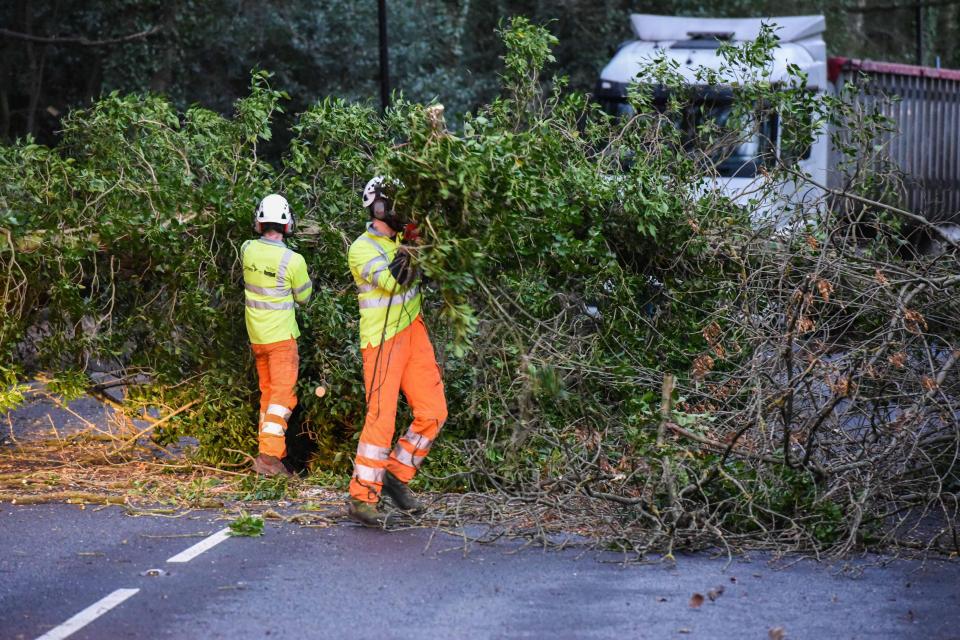 Workers tackle a large Sycamore tree blocking the A61 in Sheffield, South Yorkshire blown down in high winds – GUZELIAN 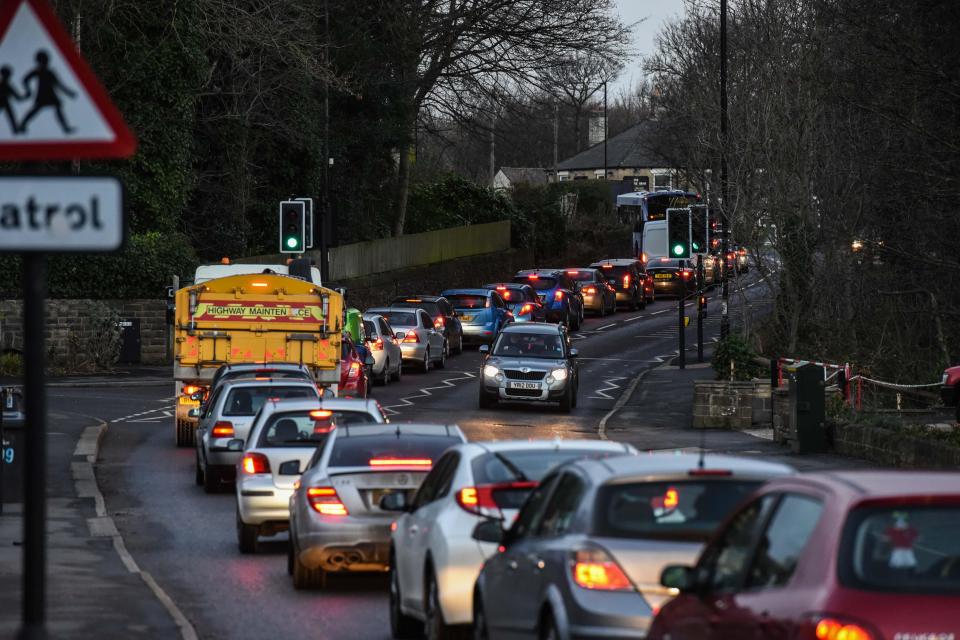 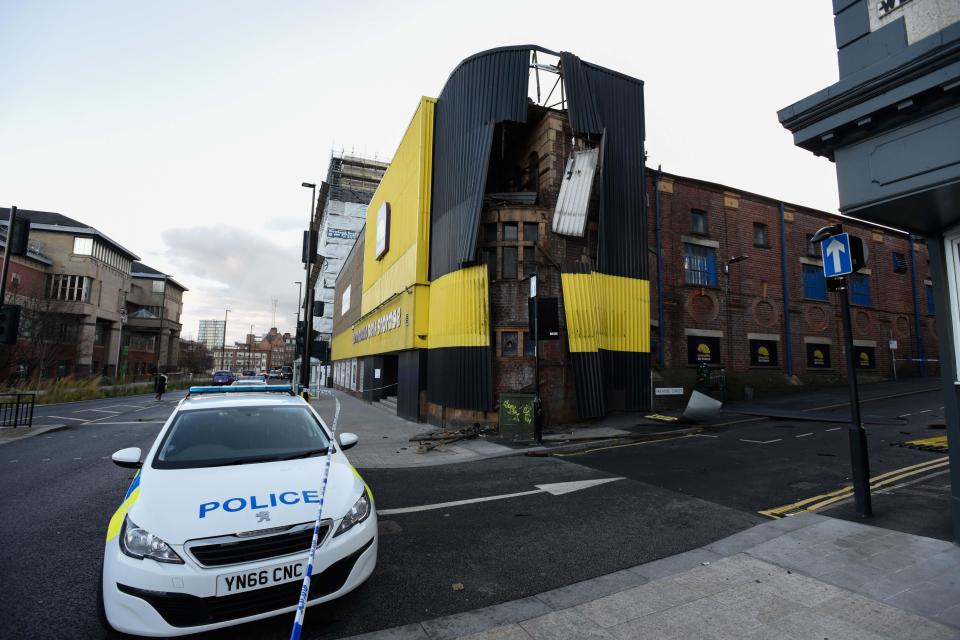 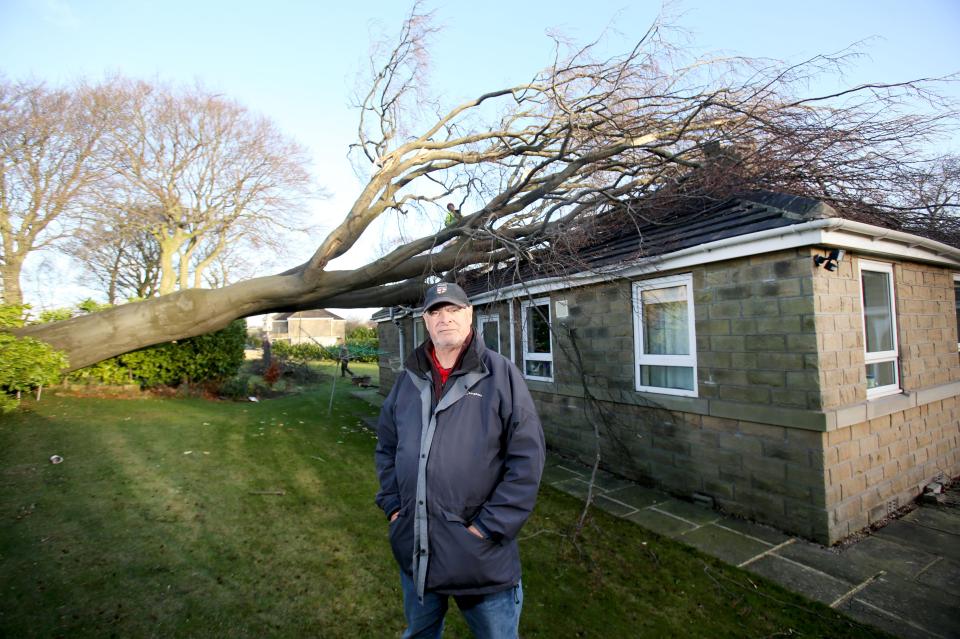 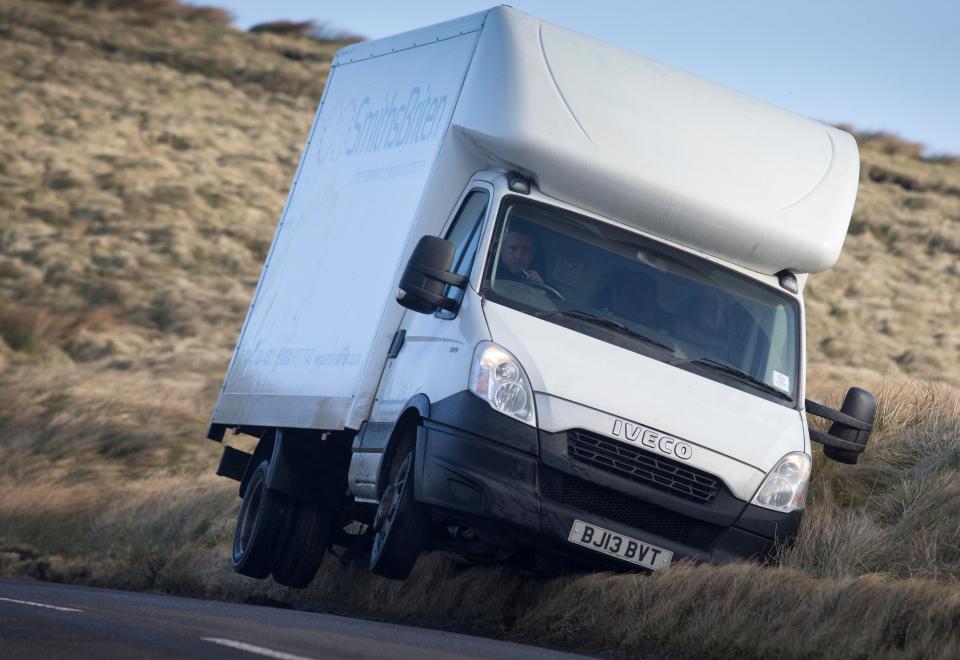 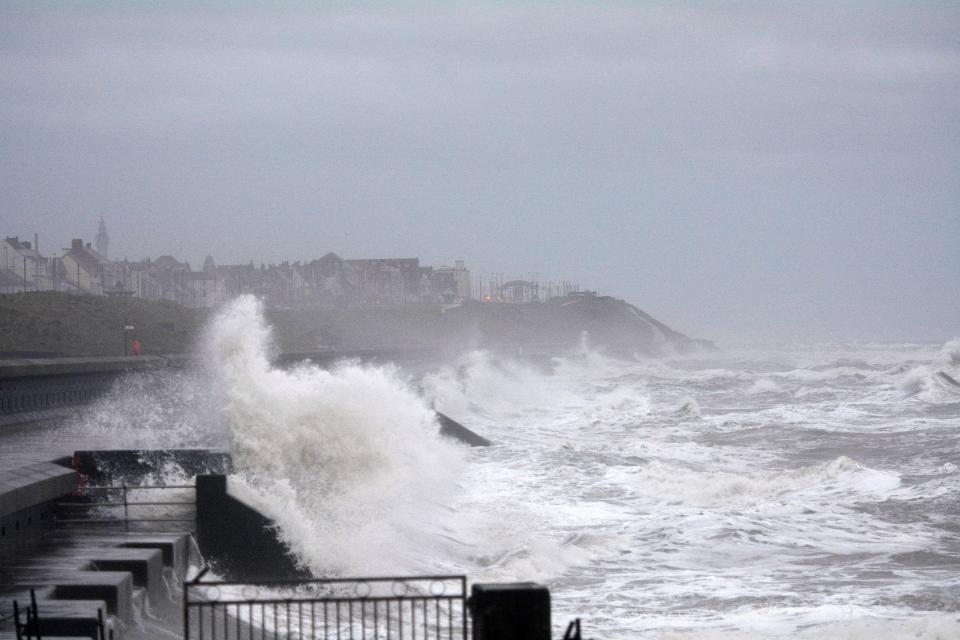 Storms batter the coast at Norbreck near Blackpool as the country gears up for more wintry conditions later this week – SUNPICTURES1@NEWS.CO.UK
The Met Office said the chilly conditions will move southwards and showers will become increasingly wintry from Wednesday.
A change in the wind by the start of Friday is set to bring snow showers to the north of Scotland, Northern Ireland, the North York Moors, and maybe even Norfolk.
Parts of the South East will also start to be affected, although Ms Sharples said the snow falling in these regions will come in showers and is unlikely to build up.
But she warned: “Even a centimetre of snow in this country can obviously cause some disruption.”
The Met Office also warned that “lightning may accompany the heaviest showers, with potential disruption to power supplies as a consequence”.
In terms of temperatures, Ms Sharples said: “We are looking at low single figures, 2C to 5C by day, and then overnight it will vary across the country.
“But where there is snow lying it could be heading towards double minus figures, -8 or -10C especially in towns and cities, and probably in the north of England and Scotland.”
WeatherOnline forecaster Garry Nicholson warned to brace for the mercury to nosedive tonight (Wednesday) as air floods in from the Arctic.
He said: “A dramatic drop in temperature will take place by Thursday as cold Arctic air spreads from the northwest.
“Heavy snow and hail showers will affect the west and the north during Thursday and Friday.
“Thunder and lightning is possible locally and bands of snow may spread into central areas at times.”
RAC spokesman Rod Dennis said: “Even a small amount of snowfall has the potential to cause major disruption for motorists.
“Commuters and those drivers planning longer journeys this week must heed the weather warnings and be prepared for tricky driving conditions and significantly extended journey times.”
Europe has seen more than a dozen people die from cold weather in recent days with ten people dying in Poland on Friday after temperatures plummeted to -20C (-4F) on Saturday.
A man died on Saturday in Belgium when his truck slid off a motorway and in Italy sub-freezing temperatures were blamed for the deaths of half a dozen homeless people.
A Met Office ‘alert and readiness’ cold weather warning is in place from Wednesday until Sunday morning.
It warns of an “80 per cent probability of severe cold weather, icy conditions and heavy snow” in parts of England.
It states: “From Wednesday onwards the weather will become increasingly cold, with snow showers arriving, leading to severe cold weather and a risk of icy conditions.
“These snow showers, initially affecting northern England, where some will be prolonged and heavy, will reach more southern areas later this week.
“This weather could increase the health risks to vulnerable patients and disrupt the delivery of services.” 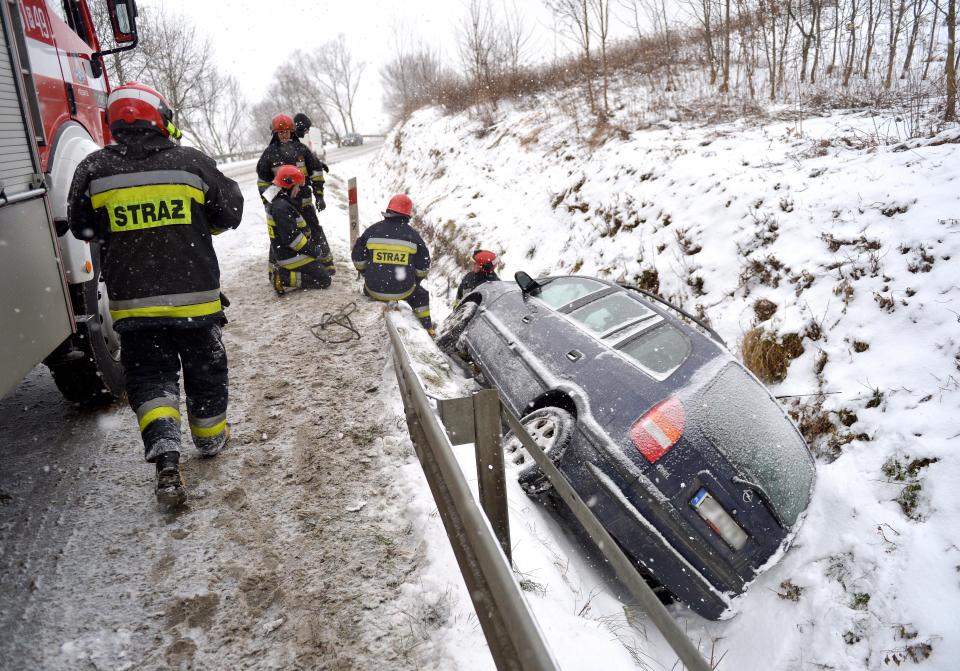 Two adults and four children were taken to hospital after their car slid into a ditch in Babice, Poland, on Thursday where temperatures plummeted to -20C this week – PAP 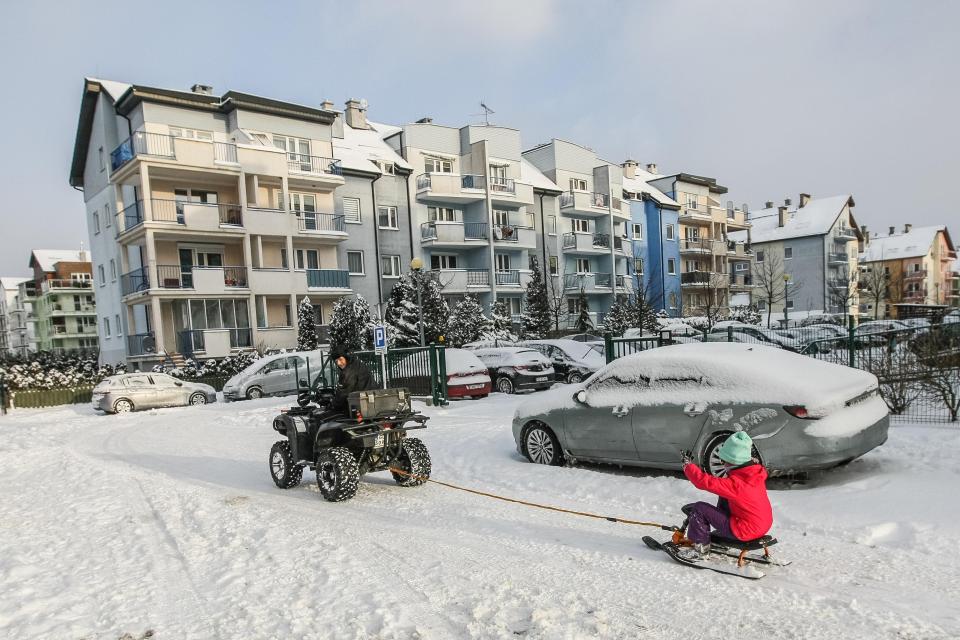 A father pulls his son along on a sled after a heavy fall of snow in Gdansk, Poland – GETTY IMAGES
James Madden, forecaster for Exacta Weather, said: “The first belt of snow is likely to hit northern and western parts of the country from Wednesday evening and during the early hours of Thursday.
“This will spread to parts of The Midlands and central and southern England later; anywhere in the country could see snow.
“This could be the start of prolonged cold and widespread wintry weather.”
The Office for National Statistics said last year brought around 15 per cent more deaths between December and March.
Malcolm Booth, chief executive of the National Federation of Occupational Pensioners (NFOP), said: “Winter deaths shouldn’t be a headline again this year so it is important we all play our part by helping to reduce them by checking on relatives, friends and neighbours to make sure that they can keep warm and have food.
“Cold snaps, especially following periods of mild weather, can often catch out the elderly and vulnerable and it’s even more important that we check.”
Courtesy of thesun.co.uk
http://tinyurl.com/zfsg77c