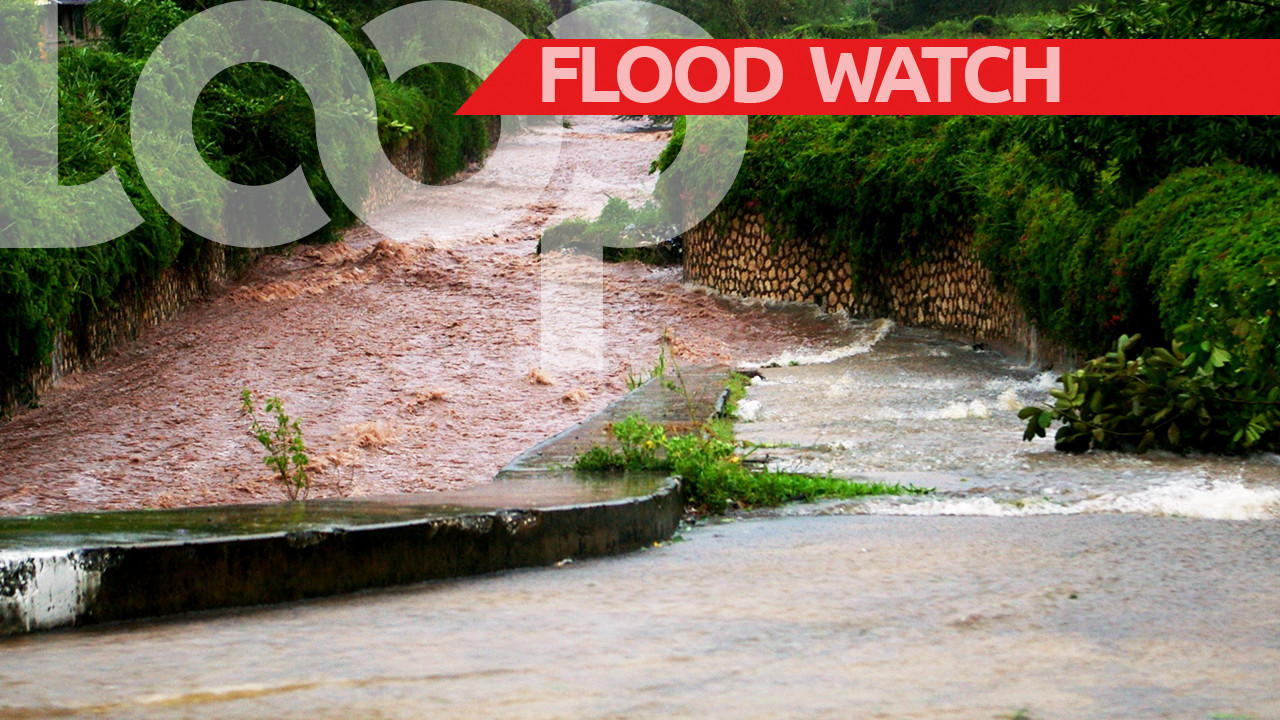 With water levels already high and heavy rainfall expected to continue for at least the next 24 hours, the Meteorological Service (Met Office) has issued a Riverine Flood Alert for Trinidad.
In an updated bulletin issued this afternoon, the Met Office said the possibility of river overtopping is imminent, if it has not occurred already in some low-lying areas.
Information coming from the Water Resources Agency indicates that water levels in some of the nation’s major rivers as well as their tributaries are fast approaching threshold levels. Some tributaries of the Caroni River have reportedly already begun overflowing onto their banks.
Earlier, the Met Office in an information bulletin warned of the possibility of street and flash flooding. But, as opposed to those types of flooding, riverine flooding is more prolonged and widespread.
The latest alert was issued in light of expected run-off into the basins from current rainfall, in addition to expected rainfall today into tomorrow.
Citizens residing near the Caroni River Basin, in particular, are asked to be on the alert for rising river levels and possible overspill.
All necessary measures must be taken to preserve life and property, the Met Office underscored.
The Met Office again advised that the country is under no tropical storm threat, watch or warning at this time.
An updated bulletin will be issued at 6 pm today or sooner if weather conditions worsen.
Citizens are reminded that a rough seas bulletin remains in effect.
Courtesy of looptt.com
https://tinyurl.com/y7mvnvba
December 29, 2017

Britain is on alert for a chaotic New Year as Storm Dylan is forecast to hit the UK with 80mph winds early on Sunday morning.
The Met Office issued six severe weather warnings of which an amber, the second most serious alert, for snow in parts of northern England, four yellow snow and ice warnings and one yellow warning for wind.
The Met Office said: “Some very strong winds are possible across Northern Ireland and then southern Scotland on New Year’s Eve.
“There is a small chance of damage to buildings, such as tiles blown from roofs, with the potential for injuries and danger to life from flying debris.
“Large waves and beach material being thrown into coastal areas could also be a hazard.”
Emma Sharples, a forecaster for the UK Met Office, said: “Met Eireann has now named Storm Dylan which will affect Ireland and then northern Britain on Saturday night and through Sunday.
“It is looking very unsettled over the next few days with several low-pressure systems coming in off the Atlantic.
“Friday night will see a band of rain pass through England and Wales and later Scotland with another system on Saturday night giving rise to the fourth named storm of the season.
“It will remain unsettled through next week with more rain and strong winds in the forecast.”
BBC Weather, on behalf of the Met Office, issued a yellow warning of ice for the Greater London area.
Dylan will be the seventh storm of the year, following the three named storms Aileen, Brian and Caroline.
Courtesy of express.co.uk
https://tinyurl.com/yby5wg8u
December 29, 2017

Ireland braces itself for Storm Dylan as rain, sleet, thunder and 120kph winds as 2017 goes out with a bang

If you were hoping for a peaceful end to 2017 weather, you’ll be disappointed.
The closing days of the year are set to be a miserable, stormy washout of winds, thunder, sleet and rain.
And this morning, Met Eireann issued fresh weather warnings to pile on the misery – including an Orange alert for Storm Dylan, which is set to crash into us on Saturday night.
The forecaster said the wind warning applies to Connacht, Cavan, Monaghan, Donegal, Longford, Louth, Westmeath and Meath.
Dylan will bring the severe gusts on Saturday night/early Sunday morning.
Its expected track is northeastwards through Donegal Bay and up along the north-Ulster coast. The biggest impact from the storm will be across Connacht and Ulster where mean winds will reach speeds of 60-80kph with gusts of up to 120kph.
The warning is valid from 9pm on Saturday to 6am on Sunday.
Forecasters have also issued a Status Yellow wind warning – which is less severe – for Munster, Dublin, Carlow, Kildare, Kilkenny, Wexford, Wicklow and Offaly.
Southwest winds from Storm Dylan will reach mean speeds of 50 to 65kph with gusts up to 100 kph on Saturday night/early Sunday morning.
The warning is valid for the same times as the Orange alert.
A third wind warning remains in place until 1pm on Friday for South Wexford, Galway, north Leitrim, Mayo, Sligo, Clare, Cork, Kerry, Limerick and south Waterford.
And it’s not only on land where people will have to keep a close eye on the weather.
A Status Yellow gale warning is in place for west to southwest winds reaching gale force this afternoon on Irish coastal waters from Erris Head to Belfast Lough to Carnsore Point and on the Irish Sea.
And a Yellow warning remains in place for small craft: south to southeast winds will reach force 6 for a time on coasts from Malin Head to Fair Head to Belfast Lough.
Back on land, heavy or thundery showers hit the west this morning, spreading eastwards with fresh to strong, gusty westerly winds. Highest temperatures of 5C to 8C.
Tonight will start off mainly dry with clear spells and frost developing in Leinster, Ulster and north Connacht.
Rain and sleet will spread northeastwards and will turn to snow for a time, mainly over the northern half of the country. It will clear overnight.
Following Storm Dylan, on Sunday winds will ease. It will be cool and breezy with sunshine and showers. Highest temperatures of 5C to 8C with moderate west to southwest breezes.
On Sunday night, ground frost will develop in places. New Year’s Day will bring a mix of sunshine and showers.
Courtesy of irishmirror.ie
https://tinyurl.com/yag6j9kn
December 29, 2017

When the news team approached her homestead, Ms Thonika Tsuaneng’s mind was racing in a thousand different directions, trying to figure out where she would get the next penny to reconstruct her six-roomed ‘castle’ house destroyed by a hail storm Tuesday afternoon.
The loss had clearly taken a toll on her body and soul. She was so numb with shock that food, clothes and some household valuables were still soaked in the rain water streaming inside the four walls which until Tuesday, were her house. When BOPA visited house yesterday, three wet school certificates were also visible on top of a table, left to dry up after being retrieved from the water.
The storm had blown away P30 000 worth of rafters, metal sheets and threw them onto the road behind the yard, leaving her close knit family in so  dire a state of helplessness as perhaps that of free range chicks without a mother in  so wicked a world where only the strong survive.
Her two daughters, with two newborn babies, she later shared with a tinge of despair, were yesterday evacuated to their grandmother’s place to shelter them for the night. Though also helpless, they had come back, one with a child held against her bosom, to see what had remained of the house they once called home.
Apparently, situations have always conspired to prevent her from becoming a proud mother. Proud to stay in a house built for her with love by her children, which is every right thinking child’s wish. She said soon after completion they realised that the roofing was defective and was thus removed and consequently redone at a cost. This time, if her children none with a decent employment, according to her, do get the money to piece it together again, it would be for the third time. Fearful but patient in tribulations, she said the situation would pass.
However, Ms Tsuaneng was most of all thankful that her family escaped unharmed. By the time of going to press, help had only come in the form of a big tent, which was not big enough to shelter her property and family though.
In some areas around Kanye, especially Dilolwe and Mahikana wards, residents went for two nights without power supply after the storm.
Meanwhile, area Member of Parliament, Mr Patrick Ralotsia was set to visit the affected families Thursday morning.
Courtesy of dailynews.gov.bw
https://tinyurl.com/y8hooxm8
« Older Posts