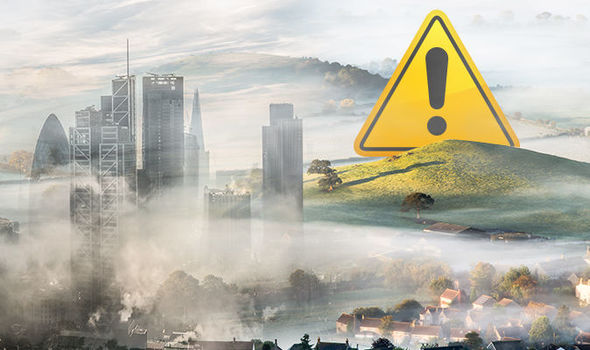 The Met Office have issued a warning for severe weather conditions today and tomorrow
CHOKING ‘radiation’ fog will smother Britain tonight prompting the Met Office to issue warnings for severe weather conditions.
Thick winter mists will engulf swathes of the nation into tomorrow afternoon with some places unlikely to clear through the day.
Poor visibility will spark tailbacks on roads and motorways while railway and air passengers have been warned to expect delays.
Light winds, foggy conditions and traffic emissions will lead to a smog build-up in some regions, experts say.
DEFRA (The Department for Environment, Food and Rural Affairs) predicts moderate air pollution levels in some central regions tomorrow, Friday and into the weekend.
A spokesman said: “Isolated pockets of moderate air pollution are possible over central and western parts of the UK on Thursday, especially where light winds and foggy conditions allow the build up of locally emitted pollution, such as near busy roads.
“Isolated pockets of pollution are again possible on Friday and Saturday.”
Weather conditions today and through tonight will be ideal for the formation of thick and troublesome ‘radiation fog’, experts say.
Clear skies will cause ground temperatures to plummet allowing moisture in the air to condense into fog droplets over the next few hours.
Light winds will stop mists clearing leaving many parts of the country under a thick pea-soup through much of the day.
The Met Office said there will be a further risk of fog through the week with weather conditions expected to stay cool and settled.
Forecaster Helen Roberts said: “Mists will quickly develop tonight turning readily into fog, mostly across western areas.
“We have clear skies which will allow heat to radiate from the ground and moisture in the air from recent precipitation and light winds; these factors will lead to the development of radiation fog.
“This fog will become more extensive overnight and we are expecting frosts in the morning with temperatures expected to drop to below freezing.
“Fog will be quite stubborn to shift and could still be an issue into tomorrow afternoon, there are some places where it won’t clear all day.”
A Met Office severe weather warning covers a portion of western Britain through tonight until 11am tomorrow.
Chief forecaster Andy Page said it will thicken over the next few hours and warned to expect rush-hour travel problems.
Visibility could drop to 100 metres in some places bringing dangerous driving conditions and hindering flight take offs, he added.
He said: “Fog is expected to become increasingly widespread through Wednesday evening and overnight into Thursday.
“Slower journey times are possible and there is a chance of delays to flights.
“Fog will thin slowly later on Thursday morning, although some patches may persist into the afternoon in the west of the warning area.”
Regions most at risk will be London and the southeast; northwest England; southwest England Wales and the West Midlands.
Britain is wrapping up for another chilly night with temperatures expected to drop to freezing widely with lows of -2C (28.4F) or -3C (26.6F) in rural regions.
Tomorrow will be another cloudy and murky day across the country with more of the same forecast through the week.
Despite a switch to a more westerly airflow it will feel cold especially across the north where the odd flake of snow is possible, according to Exacta Weather’s James Madden.
He said: “The week will be stay on the cool to chilly side for many parts of the country and some flakes of light snow will pop up here and there among some fine drizzle.”
Currently we have ideal conditions for widespread fog across the country, particularly, for some southern areas, where it could linger for some lengthy periods from tonight.”
Radiation fog is the result of clear skies allowing heat to ‘radiate’ from the ground causing temperatures to drop rapidly and moisture suspended in the air to condense.
A Met Office spokesman said: “If there are clear skies, the heat radiates back into space leading to cooling at the earth’s surface.
“This results in a reduction of the air’s ability to hold moisture which allows water vapour to condense into tiny water droplets eventually leading to the formation of fog.
When temperatures drop low enough, ‘supercooled’ liquid droplets become suspended in the air and can freeze on surfaces, this is the cause of ‘freezing fog’.
WeatherOnline forecaster Simon Keeling added: “Further spells of drizzle here expected for the far northeast of Scotland tonight.
“Elsewhere it will be dry with clearer spells.
“Mist and fog patches will be forming as the night progresses and these will be freezing and dense in central and northern areas.”
Courtesy of express.co.uk
https://tinyurl.com/y9oo36en