Calgary is calling on its friends to help dig the city out of a record-breaking October snowfall.
Snow-clearing help is on the way from Edmonton, Red Deer, Okotoks and Medicine Hat, bringing additional plows and sand-spreaders to help make Calgary’s roads passable.
“There’s a lot of work to be done, and we’re going to need some help to get it going,” said Calgary Emergency Management Agency chief Tom Sampson. 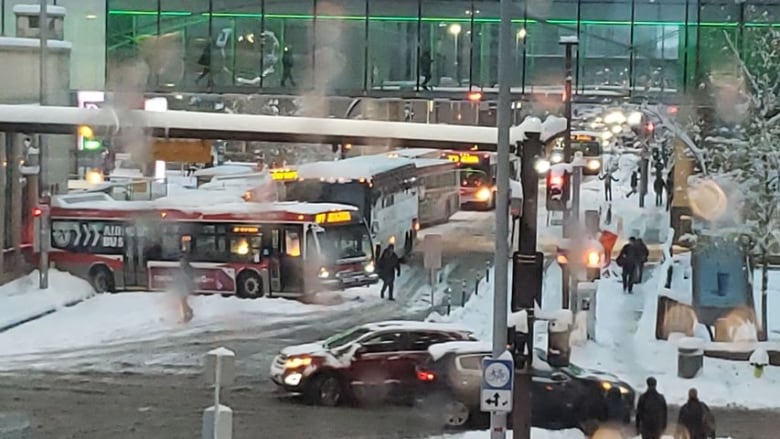 Calgary Transit buses were no match for Tuesday morning’s snow-covered roads. (Daniel Avellaneda)
Bill Biensch, roads maintenance manager, said the city’s snow response typically starts on Oct. 15, but 85 per cent of contractors responded to the city’s call to start the snow-clearing season early. There were 18 city graders, 16 hired graders and 42 sanders on the road by early afternoon.
Stranded motorists
A section of the Trans-Canada Highway was shut down in the late afternoon. George Alvarez was one of those stranded motorists near Lac des Arcs just east of Canmore.
“People are frustrated,” Alvarez told The Homestretch just before 5 p.m. MT.
“I’ve left Banff at 10:30 this morning. I spoke to a truck driver who said there were a couple of semi-trucks that jackknifed at the top of the hill.”
“I brought water and I had a couple of chocolate bars but I have eaten them now, so we will see what happens.”

Accidents near Lac des Arcs shut down the Trans-Canada Highway in the afternoon, stranding motorists for hours. (Dave Gilson/CBC)
Snow route parking ban issued
A snow route parking ban takes effect Wednesday at 10 a.m. MT. The ban is expected to last 72 hours.
A record-breaking 15 to 25 centimetres fell in Calgary overnight, CBC meteorologist Christy Climenhaga told the Calgary Eyeopener Tuesday morning. The previous record for Oct. 2 was set in 1954 with only about five centimetres.
“But the all-time extreme record for one day in October is about 30 centimetres in 1914, so you guys are on your way to breaking that,” she said.
By 4:30 p.m., parts of the city had reported getting 40 centimetres, the city said in a release. 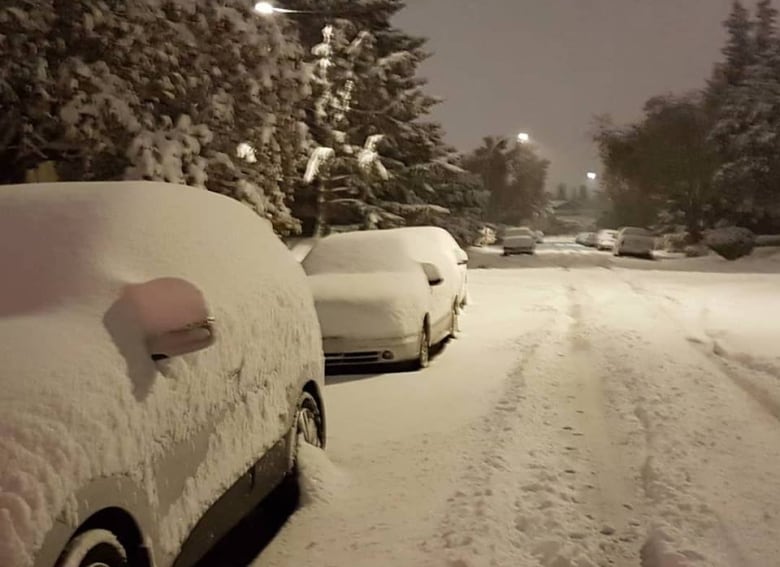 Calgary was hit by an early fall snowstorm Monday night. (Sarah Lawrynuik)
The snowfall came fast and heavy, which made roads and highways slick for morning commuters.
There were 251 collisions reported in the city between 11 p.m. Monday and 3:30 p.m. Tuesday, many involving minor injuries. 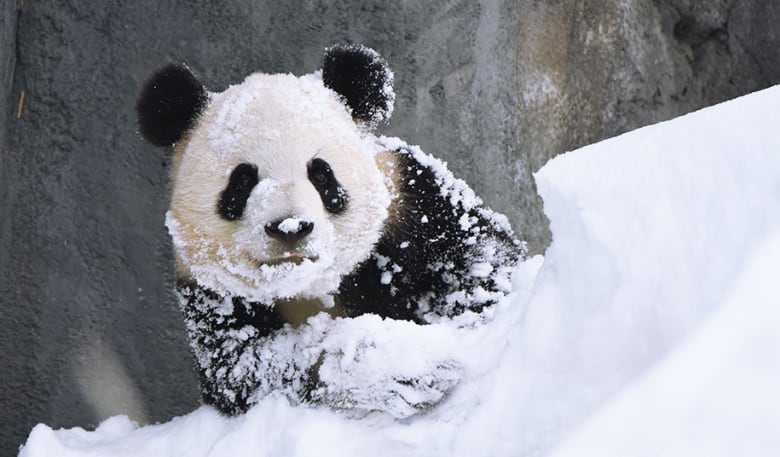 Not everyone was bothered by the snow. The pandas at the Calgary Zoo seemed to enjoy it, but of course they didn’t have to commute. (Calgary Zoo)
Calgary Transit reported Tuesday morning buses that travel on hills were having trouble navigating the slippery roads, so commuters with stops in the middle of hills were asked to wait at either the top or bottom.
Doug Morgan, Calgary’s director of transit, said as many as 80 buses got stuck in Calgary during the morning commute.
“Today was a bad day. It was a bad day for delays and stuck buses,” he said.
Buses on Routes 2, 3, 4, 5, 6, 53, 54, 72, 73, 77, 93, 94, 305, 408 and 422 were on snow detour by 3 p.m. MT, and both the Red and Blue lines of the LRT were running several minutes behind schedule — and for a few minutes, both lines were entirely blocked.
Other routes have temporary partial route changes, all of which are detailed on the transit authority’s website.
According to Climenhaga, the cold and snowy weather system is the result of a steady flow of moisture coming over the Rocky Mountains from a low over the Pacific Ocean.
“What that’s doing is it’s colliding with an extremely cold air mass … that has been set up over the Prairies for weeks, really … but you’re seeing a steady, steady line of moisture hitting that cold, cold air.”
Calgary police are urging people to adjust their driving.
“A lot of people seem to forget how to drive. In fact, they just haven’t taken the time yet to adjust. We need to increase the following distance, leave yourself more room to stop and avoid quick movements,” Const. Jeremy Shaw said. 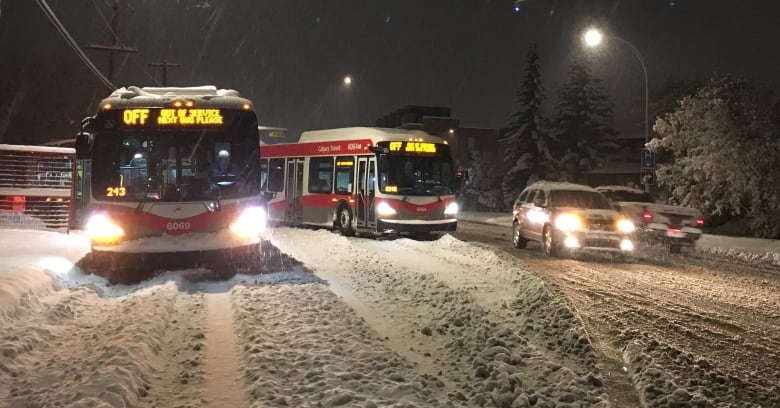 Two buses blocked the eastbound lanes of Memorial Drive shortly before 7 a.m. Tuesday. Buses on many routes were on snow detour Tuesday morning. (Tiphanie Roquette/Radio-Canada)
And the weather is showing no signs of letting up early, as Environment Canada has much of southwestern Alberta under more snowfall warnings.
According to the agency, general snowfall amounts of 15 to 30 centimetres are expected, but up to 45 centimetres could fall in the mountains. 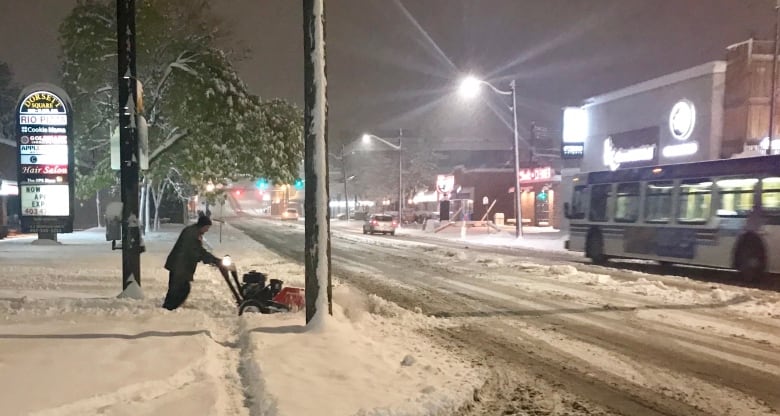 A man clears snow from a section of sidewalk along 14th Street S.W. early Tuesday morning. (John Gibson/CBC)
“Snow is forecast to taper off from north to south. Snow will end this evening in Jasper and by Wednesday morning in Pincher Creek,” Environment Canada said.
Traffic on the Trans-Canada Highway west of Calgary was badly snarled for much of Tuesday. The eastbound lanes west of the Exshaw turnoff were backed up for more than three kilometres. RCMP said westbound lanes were also jammed, but that the “parking lot” has since been cleared. They advise against travel in the area.
Courtesy of cbc.ca
https://tinyurl.com/y9sckh6v
October 3, 2018

Storm and snowstorm alerts for all of North and South Iceland

The Icelandic Meteorological Office has issued Yellow Weather Alerts, warning of severe gale in South Iceland and snowstorm in North Iceland today Wednesday and tomorrow Thursday. Travelers should make appropriate revisions to their travel plans.
Gale or severe gale, with hazardous wind gusts and localized winds near steep mountains in South Iceland can pose danger to travelers driving cars susceptible to wind. We have already seen one RV blown off the road in the season’s winter storms.
Meanwhile a snowstorm is headed for North Iceland. Gale force winds, heavy snowfall and blowing snow can create whiteout conditions while ice and the snow will reduce traction, making roads dangerously slippery. Stronger localized winds can create hazardous conditions for vehicles susceptible to wind.
The weather alert for South Iceland, including the entire South Coast is in effect from 15:00 (3 pm) today, Wednesday September 3, until 23:00 (10 pm), and for South East Iceland, from the village of Vík to the town of Höfn east of Jökulsárlón glacier lagoon from 17:00 (5 pm) today until 01:00 (1 am).
Travelers should prepare for gale or severe gale with sustained wind speed of 15-25 m/s (33.5-56 mph). Localized winds, especially near steep mountains, can reach 35 m/s (78 mph). Such winds can be hazardous to vehicles that are susceptible to wind.
Snowstorm alerts for the northern part are in effect for the Westfjords from 22:00 (10 pm) tonight until 14:00 (2 pm) tomorrow, Thursday September 4, for North East Iceland from midnight until 1:00 in Friday morning, and for North West Iceland from 4:00 (4 am) until 22:00 (10 pm) tomorrow evening. A northeasterly severe gale and localized winds which can reach hurricane force (35 m/s), with snowfall, sleet and rain. Winter driving conditions on roads at higher elevations
Note that ICE-SAR has advised people to postpone travel
ICE-SAR has warned travelers that due to the snowstorm there will be very difficult or no travel conditions in all of Iceland north of Borgarnes town in West Iceland and Egilsstaðir in East Iceland, while there are difficult or no travel conditions in South Iceland from Selfoss eastward. The only part of Iceland which seems to be spared the full force of the storm is the South-West, including the Capital Region and Reykjanes peninsula.
Courtesy of icelandmag.is
https://tinyurl.com/ycmyxmhh
October 3, 2018

In the early morning of October 3, the reporter learned from the Ganzi State Public Security Bureau of Sichuan Province that after more than 430 police officers at the city and state levels worked all night in the snow and went up to the mountain, the direction of returning to Kangding from the folded hills has been basically dredged. Because of the low temperature and high altitude, folded mountains formed ice surface, a large number of vehicles are still slowly withdrawn and folded under the guidance of the police organizations. Its mountainous.
Last night, Ganzi vice governor Gao Zhan arrived at the scene of the mountain fold, organizing and directing traffic work. In addition to arranging a large number of police to carry out rescue and relief, the government has arranged for special personnel to send food, drinking water, high-drug and other supplies to the trapped, but due to snow congestion, delivery vehicles can not go up the mountain, medical personnel on foot to carry out medical relief, some of the police carrying supplies to the mountain rescue.
After an all-night fight, the current folding mountain to the direction of Kangding basic dredging, which ensures that all trapped folding mountain personnel and vehicles can return to the main town as quickly as possible. People warned reporters that in the middle of the night, the temperature dropped to below zero, snow and ice on the road surface, most of the drivers stranded from Chengdu and other places, basically no ice and snow driving experience, extremely slow speed, folded mountain section blocked about 1100 vehicles, has been evacuated back to Kangding direction.
Courtesy of jqknews.com
https://tinyurl.com/y98ebwxh
October 3, 2018

September was record hot, but you have to get used to low temperatures. In the night from Saturday to Sunday the cold record for this month declined. Meteorologist Arnold Jakubczyk reported that in the Czarny Dunajec minus 7.9 degrees.
“The cold pole was minus 7.9, so a new record of the cold of September came, but if there was no fog, it would even have minus 11” – wrote Arnold Jakubczyk on Twitter who is a meteorologist and a “kingfisher hunter” . “Black Dunajec today was -5.8 at 2 m and – 9.2 at the ground.” Normally a shock, because the record was broken in September “- he reports.
On September 26, the first autumn of this autumn was recorded in the lowlands. Negative temperatures have appeared in the month, which may turn out to be the hottest September in the history of all measurements. On the night of 25/26 September 2018 the lowest temperature was measured at Kasprowy Wierch – minus 6.6 degrees throughout the country.
However, you do not have to remove the winter clothes from the cabinets. According to the long-term forecast, we will enjoy sunny weather next weekend and the temperature will be 18 degrees.
Courtesy of navva.org
https://tinyurl.com/yaeae4rc
October 3, 2018