Thousands of dead #fish found floating in a river in #Wolgast, #Germany

In the city harbor in Wolgast, an approximately three-meter-wide and 50-meter long carpet of thousands of dead white fish has formed. This was reported by the water police in Mecklenburg-Vorpommern.

The fish had therefore partly torn heads or torn out swim bladders. According to the police, this indicates mechanical effects.

The cause of the fish extinction is, according to the police, but still unclear. A hypothesis was that the incident related to a nearby shipyard, said a police spokesman. Officials have taken fish and water samples and have now determined. The disposal of the carcasses was initiated by the authorities.

Carcasses of around 600 Olive Ridley turtles and two dolphins washed ashore have been recovered by forest officials in the last two days. The carcasses were found on the beach from Hukitola to Eakakula in Gahirmatha marine sanctuary areas.

It is suspected that the turtles were killed after being hit by fishing trawlers or entangled in nets in the sea. Though there is a prohibition on fishing in 20 km distance from the beach in Gahirmatha, the trawler operators take fishing illegally there, alleged Hemant Rout, an environmentalist and secretary of Gahirmatha Marine Turtles and Mangrove Conservation Society.

The forest and wildlife officials have been hoodwinking the State Government and the people by providing less numbers of dead turtles to the authorities to save their skins. The death of nearly 1.7 lakh turtles over the past 17 years is sure to adversely affect the population of endangered marine species, he added.

The endangered turtles in large number come to Gahirmatha, mouth of rivers Devi and Rushikulya in Odisha coast, for annual nesting.

Forest Range Officer of Gahirmatha Srirampada Arabinda Mishra said the State Government has imposed a ban order on fishing activities inside the marine sanctuary from November 1, 2018 to May 31, 2019 to protect the sea turtles.

Forest officials have already arrested around 380 fishermen and seized 83 fishing vessels on charges of illegally fishing in Gahirmatha, he informed.

THE deaths of penguins at the Halifax Island beach some 10 kilometres outside Lüderitz near Diaz Point, about 100 metres off the mainland, are suspected to be linked to bird flu.

The ministry of fisheries’ spokesperson, De Wet Siluka yesterday confirmed that symptoms of bird flu were detected from the live and rehabilitated penguins’ observations, and it is suspected it might be the cause of the penguins’ deaths.

The recent inspection, conducted on 27 January, found similar symptoms in one of the swift tern birds on the same island, he added.

But, Siluka said, central veterinary laboratory results expected soon were still needed to determine the exact cause of the seabirds’ mortalities.

The deaths of the penguins were discovered late last month, and about 250 mostly adult birds have been reported dead.

He said the ministry is committed to visiting the island on a regular basis, despite rough weather conditions, to collect dead penguins’ bodies, and burn them to avoid the further spread of the suspected cause of death.

“We are also collecting and rehabilitating the infected penguins at our intensive care facilities,” he continued.

Siluka said the biggest worry is that penguins are already endangered species.

Halifax Island, according to the ministry’s spokesperson, is the third most important breeding site for African penguins, and is home to about 2 500 penguins that contribute to the entire Namibian population of about 26 000 penguins.

Other seabirds breeding on the island include crowned cormorants, swift terns and Hartlaub’s gulls.

Penguins are part of a food web, and basically feeding regimes of other seabirds as well, and the ministry was thus working around the clock to establish the cause of death. 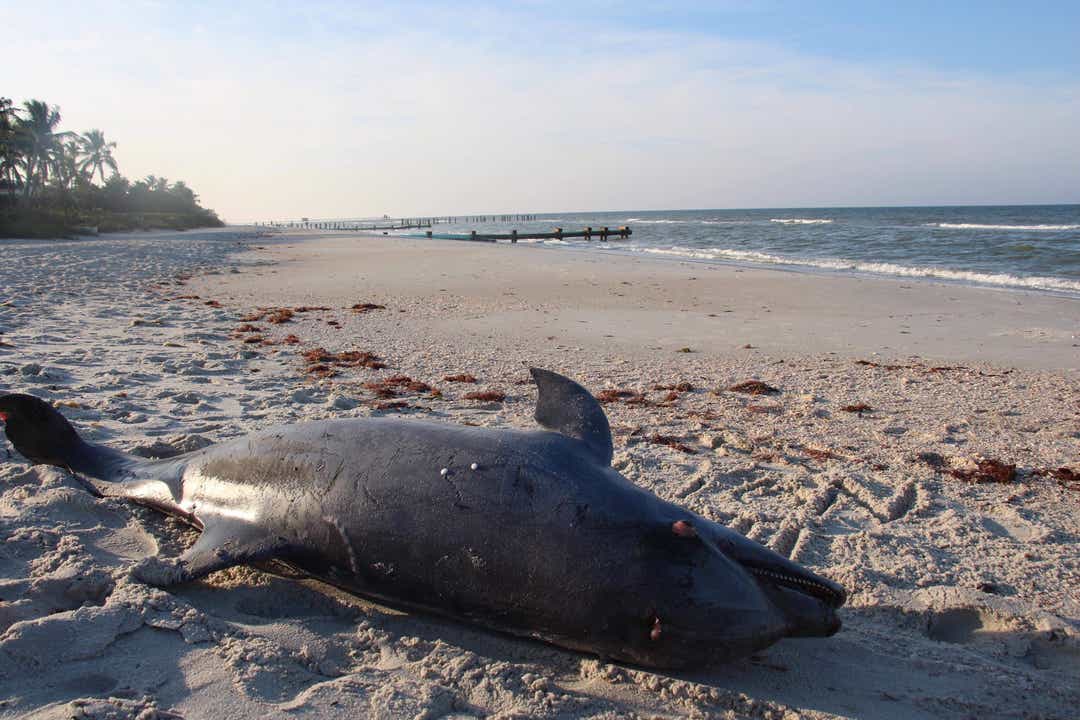 Eight dolphins were found stranded in Lee County during the government shutdown, but the shutdown’s effects on the federal program that helps study the cause of the deaths are unclear.

Some of the eight animals were too decomposed to be identified with certainty, but it’s likely all of them were bottlenose dolphins, said Kim Amendola, a communications supervisor for the fisheries division of the National Oceanic and Atmospheric Administration.

The discovery of the eight dolphins comes after 42 dolphins were found dead on beaches in Collier and Lee counties Nov. 21-30.

As of Thursday, final test results to determine what killed the dolphins still were pending, Amendola said.

Officials theorized the dolphins found in November were healthy before ingesting fish poisoned by red tide from an offshore bloom, said Blair Mase, a marine mammal stranding coordinator for NOAA.

Full or partial necropsies on several dolphins found a toxin indicating red tide was to blame, but officials said the final test results are needed to confirm the cause of death.

NOAA Fisheries Deputy Director Jennie Lyons did not answer directly when asked whether the shutdown delayed test results or whether NOAA’s Marine Mammal Stranding Network was operating during the shutdown.

Hundreds of dead #starfish found washed up in Kinmel Bay and #Prestatyn, #Wales

HUNDREDS of starfish have been found washed up on the beach in Kinmel Bay.

The sad sight, which also included fish, was spotted on Monday, January 28.

A resident, who asked not to be named, was out walking with her sister at about 1pm when they stumbled across the “horror”.

She said: “We were shocked and terrible saddened.

“The weather the night before was terrible and so windy. I actually walked to the sea wall and didn’t realise that, while I was taking in the view, all those creatures were being thrown around.

“I’ve recently moved to the area and one of the reasons why is because I love this coast and the wonderful wildlife here.”

Starfish and various shellfish were also spotted by residents on the beach near the Nova in Prestatyn.

Anne Williams said: “I was at the beach at about 10am. I was walking from the Nova towards the sailing club and a bit beyond.

“It was a very shocking sight and left me feeling quite sad and helpless.

“I found that a few of the brittle star type were still alive, so I put as many as I could back into the water, but I don’t know if it does any good.

“There were also a few urchins in amongst the masses of starfish and shellfish,” Anne added.

Gem Simmons, aquarist and mammal keeper at SeaQuarium Rhyl, said: “Unfortunately this is a very common sight during stormy offshore weather, especially along the coast of North Wales and slightly more common on Anglesey.

The intense heat that affected the country in recent days did not affect only human beings, who persistently complained about the thermal sensations through social networks.

The poultry sector, in particular, suffered the heat stroke in its economy, since 100,000 chickens killed by high temperatures are estimated (mainly in Montevideo and Canelones).

The president of the Asociacion de Fasoneros de Pollos Unidos, José Luis Strazzarino, told the National Report (Radio Uruguay) that it is common for mortality to increase at this time of the year, but not in the way it was registered in the last week. “The high temperature never generated such a mortality in so few days,” he said. In general, the mortality rate of chicks raised is between 2% and 3%, which is very low in the region, he said.

Strazzarino said that the poultry sector has been complicated for years. “We raise fewer chickens per square meter, sometimes you get to the extreme like when a company goes bankrupt, as happened with Tennent last year,” he said.

In August 2018, 80,000 chickens died after being left without a ration, as a result of the crisis affecting that company at that time.

“The industry has been complicated since exports were cut, it was prepared to export between 10,000 and 14,000 tons per year, which was going to go mainly to Venezuela, it grew too much with a market that was not real, but Tabaré Vázquez said that came a poultry farm that was going to sell 300 million dollars and that was a real business, not something invented, but it fell, without anybody’s fault, if it was done, it would have needed all that productive apparatus. chickens, which generated a crisis, “he concluded. 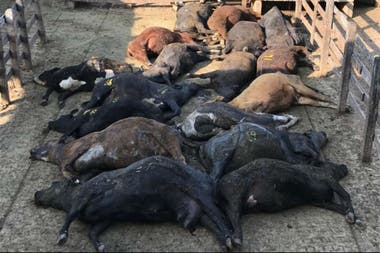 These are difficult days for the hacienda . The heat wave was present in the Liniers Market, where more than 150 animals died the day before yesterday and joined other hundreds that were lost in feedlots and transport trucks.

As a consequence of the high temperatures, with a thermal sensation higher than 45 ° C , the long trips from the hacienda from the fields to the city of Buenos Aires worsened the situation. Some arrived dead and others fallen or in such extreme conditions that they died within hours of getting off the transport. Also in the refrigerators, dozens of animals were lost.

In dialogue with LA NACION , Alfonso Monasterio, of Tattersall Monastery and director of the Liniers Market, said the situation is worrisome. “Added to the problem of the deaths of the animals of the day on Tuesday, at night there were street cuts due to the lack of light in the adjoining neighborhoods that did not allow the entry of trucks and this delayed the discharge of today [ on Wednesday]”,

Hundreds of thousands of #fish die in the Darling River, #Australia

“Hundreds of thousands” of fish have died in drought-stricken Australia in the last few days and more mass deaths are likely to occur, the authorities warned Tuesday.

Locals around the Darling River were confronted with a sea of white, as dead fish carpeted the waters near the southeastern Outback town of Menindee.

Just weeks after up to a million were killed—with scientists pointing to low water and oxygen levels as well as possibly toxic algae—another mass death occurred in the key agricultural region.

Inspectors from the New South Wales Department of Primary Industries have visited the site and said they found that “hundreds of thousands of fish have died”.

“Further fish deaths in the Darling River are anticipated as a significant number of fish have been observed under stress,” the department said in a statement.

Some 700 kilos (1,543 pounds) of dead fish were removed from the river Monday, with similar amounts expected to be collected Tuesday, it added.

The Darling River is part of the Murray-Darling River system that stretches thousands of kilometres across several states.

Fisheries officials were also investigating reports of another fish kill further south in the Murrumbidgee River, which flows into the Murray-Darling system.

With temperatures expected to rise and no rain forecast, there remained a “high risk of further fish kills over the coming days and week”, officials said.

On Friday temperatures soared to almost 46 degrees Celsius in East Gippsland, about 300 kilometres east of Melbourne, accompanied by strong winds.

The department temporarily closed the Mitchell River walking track near nesting areas of the animals at Bairnsdale, to try to protect the flying foxes.

But it did little to help the endangered bats, and authorities estimate about 1,400 of the animals perished near Bairnsdale, almost a third of the town’s flying fox population.

Another 900 flying foxes were found dead near Maffra.

“We have had grey-headed flying foxes impacted on before from heat events, but certainly not to the extent we have experienced over the last couple of days,” he said.

“It was a prolonged period of temperatures up around 46 degrees across Maffra and Bairnsdale, also accompanied with low humidity and hot drying winds.

“And unfortunately, as a result we had a number of grey-headed foxes impacted at both sites.”

He said the department estimated about 5,000 flying foxes were nesting near Bairnsdale before the devastating mass deaths.

It comes about a month after an extreme heatwave in Far North Queensland killed about 23,000 spectacled flying foxes, which is about one-third of the species in Australia.

Along with the spectacled flying foxes, the grey-headed flying fox species is also endangered, and classified as ‘vulnerable’ due to a significant decline in its population as a result of loss of habitat.