This is the alarming moment that paramedics in hazmat suits were forced to board a plane in Mongolia amid fears of a bubonic plague outbreak.

Emergency workers intercepted the domestic flight at the airport in the capital Ulaanbaatar, after a husband and wife died of the contagious disease in the region where the flight originated.

According to reports they had eaten contaminated meat from a marmot, a large squirrel.

Eleven passengers from the west of the country were held at the airport and sent immediately for hospital checks while others were examined at the airport. 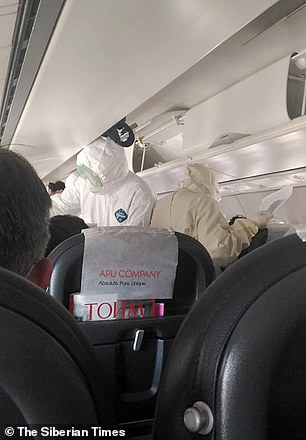 Paramedics in anti-contamination suits boarded the flight from provincial outposts Bayan, Ulgii and Khovd as soon as it landed.

Some 158 people have been put under intensive medical supervision in Bayan-Ulgii province after coming into contact directly or indirectly with the couple who died.

Some frontier check points with Russia are reported to have been closed leading to foreign tourists being stranded in Mongolia.

Top medic Dr N. Tsogbadrakh said the plague had ‘affected the man’s stomach’ after he ate the meat and gave it to his wife.

The bubonic plague can kill an adult in less than 24 hours if not treated in time, according to the World Health Organisation.

It is caused by the bacterium Yersinia pestis, which is usually found in small mammals and their fleas.

The bacterium was linked to the Black Death which wiped out more than a third of Europe’s population in the 14th century and to subsequent plague outbreaks.

The disease is now treatable with antibiotics but hundreds of people have died of it around the world in recent years.

Since the 1990s, most human cases have occurred in Africa, according to world health bosses. #Plane with 140+ aboard goes down in river near #Jacksonville, #Florida, #USA; no deaths reported