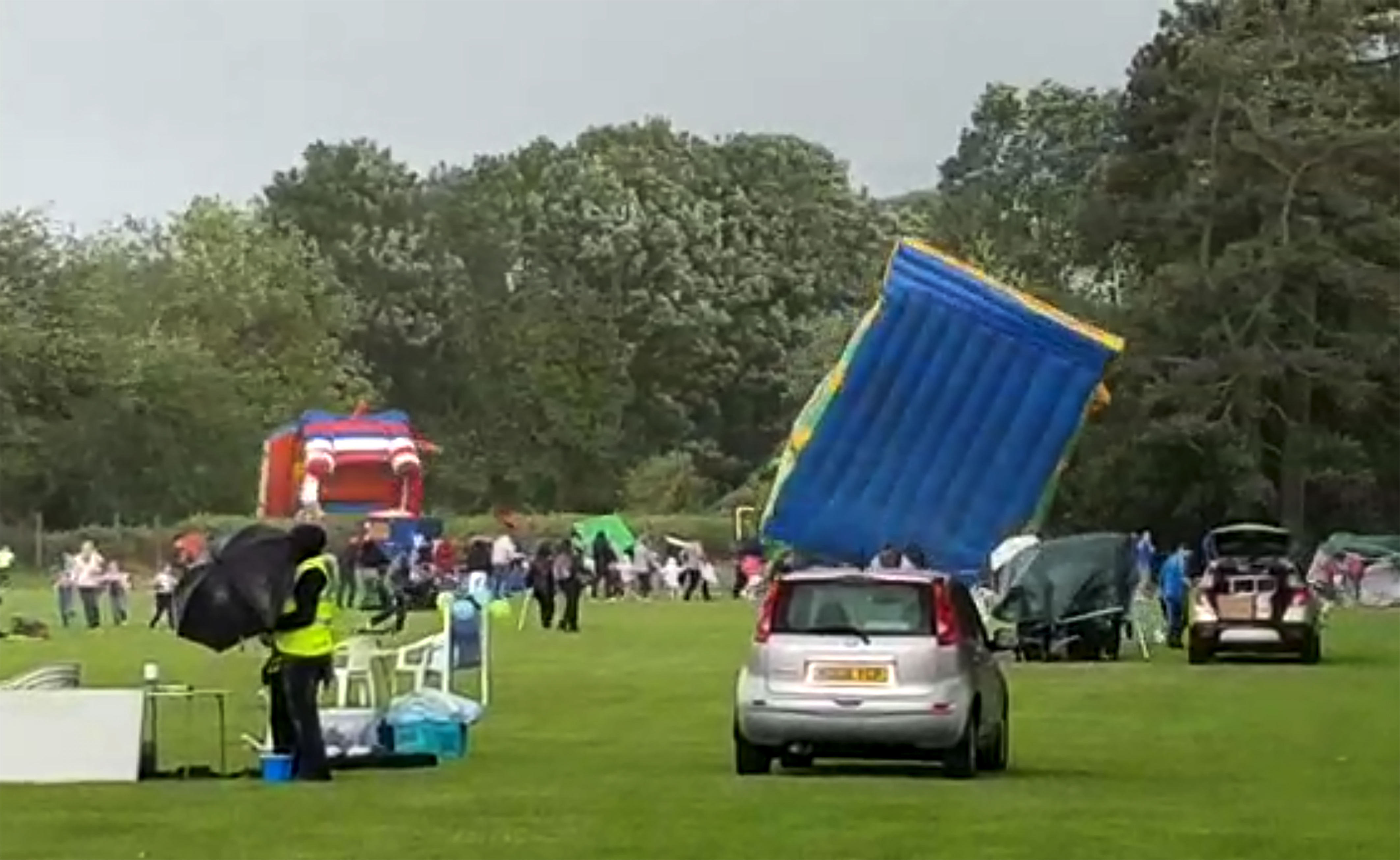 A THREE-year-old girl was among four injured when a freak “tornado” sent two bouncy castles flying in a Yorkshire park today.

Toilets were blown over and branches fell from trees as the wind lifted a bouncy castle and inflatable slide 30ft into the air.

Children could be heard screaming in the video as panicked families were forced to flee the scene alongside hundreds of attendees.

Yorkshire Ambulance Service said four people had been taken to hospital including the three-year-old, whose injuries are not believed to be serious.

Two other patients were taken to Hull Royal Infirmary, but the ambulance service was unable to say what their injuries were.

A fourth person was taken to Doncaster Royal Infirmary.

Thankfully it appears no kids were on the bouncy castle when the gust of wind hit.

Firefighters in France’s southeastern Auvergne-Rhône-Alpes region have been inundated with hundreds of emergency calls after a violent hail storm pounded nine departments on Saturday afternoon. In Haute-Savoie, a woman was killed by a falling tree.

The 51 year-old German woman was killed when a tree fell on her caravan parked at a campground in Taninges in Haute-Savoie.

Elsewhere in Savoie, the storm caused flooding and some material damage. The firefighters were called out to assist at least 30 times.

Several trees fell on SNCF train lines, in particular between Chambéry and Montmélian.Police opened a nearby gymnasium for people to shelter as they waited out the delays.

The departments of Haute-Savoie along with Haute-Loire, Loire, Rhône, Drôme, l’Ardèche, l’Ain, l’Isère, and Savoie were placed on an ‘orange’ storm warning category which was lifted late afternoon on Saturday.

France’s agricultural minister Didier Guillaume announced on Sunday that a natural disaster zone would be declared in the coming hours.

“The zone will be outlined in the coming 48 hours,” Guillaume told France Info, referring to the damage in the Drome area.

Firefighters were called some 200 times to assist people in the area around the town of Romans-sur-Isère, where farmers were particularly affected by the storm.

A dozen people were treated for minor injuries and 2,300 households were left without electricity until the evening.

“It was apocalyptic,” Marie-Hélène Thoravaldes, mayor of the town, told France Info.

The bad weather also struck western Switzerland on Saturday afternoon, bringing hail and winds reaching up to 110 km/h, according to the national forecaster MeteoSwiss.

A woman drowned in Lake Geneva when her sightseeing boat sank, police said.

A man who was in the same boat was able to swim to another vessel from where he fired “two flares”, Joanna Matta, police spokeswoman for the canton (region) of Geneva, told AFP.

The victim, whose nationality remains unknown, was then taken to a hospital in Geneva where she was declared dead.

In a separate incident, the storm also damaged some of the 465 boats taking part in the 81st edition of the Bol d’Or, an annual regatta on Lake Geneva, the event’s press service said. #Temperatures Could Reach 50C Across #Desert Areas in #Oman

Over the coming days, temperatures in the desert areas and areas west of the Hajar Mountains will continue to rise between 46C and 49C.

It could reach 50C over parts of the desert areas.

Millions of people across Argentina, Uruguay, Paraguay and southern Brazil were left without power early on Sunday after a massive power failure in the electrical interconnection system, according to reports by the energy company Edesur Argentina.