The National Institute of Water and Atmospheric Research says a sudden shift in temperatures high above Antarctica this month could bring icy ‘Beast from the East’ weather events to New Zealand next month.

In a release today, NIWA forecaster Ben Noll said there is potential for a ‘Sudden Stratospheric Warming’, or SSW, to take place next week.

An SSW typically is defined by the temperature in the stratosphere above the South Pole rising by more than 25 degrees.

Antarctica is usually circled by a ring of very cold, stormy weather – parts of which drift north and hit New Zealand from the west.

During an SSW, that flow can be reversed, which would lead to icy weather hitting New Zealand from the east – a much more rare phenomena.

“These events are rare in the southern hemisphere,” Mr Noll said.

A major SSW took place in the northern hemisphere in February of 2018, which led to a series of extreme cold snaps across Europe, with the event dubbed the ‘Beast from the East’.

If the southern SSW takes place, it’s possible that polar air masses could break off from the Antarctic region and impact New Zealand – probably during September.

“For up to about a month after the SSW, polar air masses, known as streamers, can break off from the weakened vortex and move towards New Zealand,” Mr Noll said.

“It doesn’t guarantee unusual or extreme weather, but it can happen.” 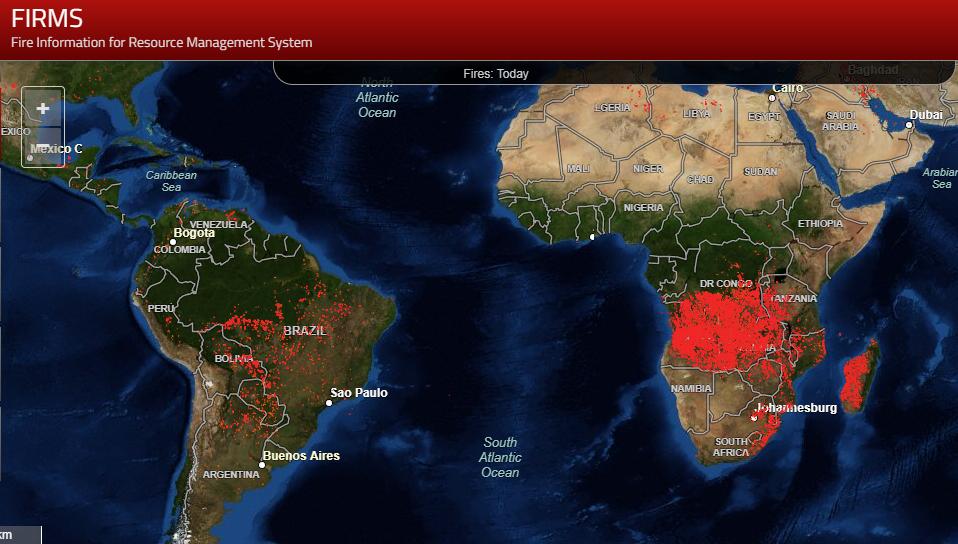 Forest fires are tearing through the Amazon rainforest, prompting worldwide protests and demands for action to protect the “lungs of the world.” But, away from the spotlight, the Brazilian fires are dwarfed by blazes in Africa.

Fires visible from space are currently burning up the Amazon rainforest at a rate of three football fields per minute, according to Brazilian satellite data. Brazil’s National Institute for Space Research reported an 83 percent increase in wildfires on last year, with more than 72,000 fires spotted, 9,000 last week alone.

With the forest burning, protesters around the world have gathered outside Brazilian embassies, demanding Brazilian President Jair Bolsonaro take stronger action against the blazes. The demonstrators, many affiliated with eco-warriors Extinction Rebellion, blame Bolsonaro’s pro-logging, pro-mining development policies for the fires, and accuse him of condoning the deliberate razing of forest for grassland.

As protesters in London chanted “Hey hey, ho ho, Bolsonaro’s got to go!” two even bigger blazes burned unnoticed in Africa. Over Thursday and Friday, more fires were recorded in Angola and the Democratic Republic of Congo than in Brazil, Bloomberg reported, citing NASA satellite data. In those two days alone, 6,902 fires were recorded in Angola and 3,395 in the DRC. 2,127 were spotted in Brazil in the same period.

However, nobody marched in London chanting “Félix Tshisekedi’s got to go!” Nor did Extinction Rebellion – a well organized group of activists that brought London’s traffic to a standstill in April – take the tube one stop west from the Brazilian Embassy to picket the Angolan consulate.

Blanket media coverage has been successful in forcing the burning of the Amazon into the public consciousness. Protest campaigns have been guided by pleas from social media influencers, while French President Emmanuel Macron declared “our house is burning,” and promised to put the Brazilian blazes at the top of the agenda as he hosts this weekend’s G7 summit in Biarritz.

While wildfires in Central Africa are a common occurrence this time of year, Bolsonaro insists that the Amazonian inferno is also part of the natural rhythm of life in the rainforest. “I used to be called Captain Chainsaw. Now I am Nero, setting the Amazon aflame. But it is the season of the queimada,” he told reporters, referring to the long-established practice of burning away overgrown farmland before replanting

NASA also reported earlier this week that the number and severity of fires were average for the last 15 years.

In Africa, it’s more difficult to know what’s happening, as next to no news reports on the fires in Angola and the DRC have surfaced in the west. No hashtag campaigns or mass demonstrations have broken out, and the issue has not been placed on the G7 leaders’ agenda.