#Train on #fire in #Berlin, #Germany

#Meteor #fireball in the skies of #PlayaDelCarmen, #Mexico

Severe #Flooding Kills At Least 28 and Displaces hundreds in #Ghana

“At the moment the death toll is 28. About 640 people in some six communities have been displaced and we are providing shelters for them,” George Ayisi, spokesperson for the National Disaster Management Organisation, told AFP.

“We’ve counted about 286 collapsed houses during this disaster and that is making life difficult for the people.”

Relief items were being transported 800 kilometres by road from the capital Accra to the affected region on the border with Burkina Faso as meteorologists warned the rains could last into November.

“We have to just prepare for anything,” Ayisi said.

So far this year 46 people have been killed in floods in the West African nation, the disaster relief agency said.

Flooding in northern and other parts of Ghana happens each year during the rainy season.

Last year, 34 people died in northern Ghana during flooding caused by heavy rains and waters spilling from a dam in Burkina Faso. 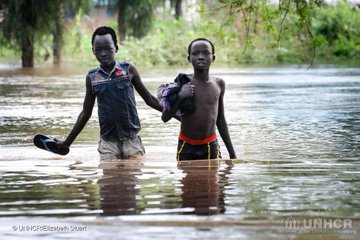 Situated in the Upper Nile State, the affected area is home to more than 150,000 refugees from Sudan. The area, near Maban’s capital town of Bunj, is prone to flooding this time of year because of heavy seasonal rains. Excess water from the Ethiopian highlands, where rainfall is becoming more intense and irregular, is also carving its way through neighbourhoods in broad, swift rivers.

UNHCR, working with its partners and the local authorities said it is rushing emergency support. The affected population is in dire need of humanitarian assistance.

“Flood waters have submerged, making access to the refugee camps difficult for humanitarians. Schools in the region also remain closed,” he added.

The floods have also impacted access to public services, including hospitals and damaged sanitation facilities– increasing health risks. There is concern that the flooding may increase the risks and spread of diseases. South Sudan was recently declared cholera free last year with the fears that the deadly disease could make a comeback.

“UNHCR and partners together with the government have already begun assessments in refugee camps in Maban and surrounding communities. Among main needs identified so far are emergency shelter, food, water, and sanitation. Refugees and local communities urgently need international support as it faces one of the worst floodings within the last decades.” Mr. Ilmi emphasized.

As an immediate response, UNHCR has pre-positioned emergency shelter kits and material assistance to help more than 5,000 affected families/some 25,000 people to rebuild and repair damaged shelter, but more support is needed.

Recently media reported that 2,000 homes were destroyed by flooding in Torit in the far south of the country, leaving thousands homeless. The floods struck after a week of heavy rain that began around 04 October, 2019.

Emergency authorities in Uruguay report that severe weather, including strong winds, heavy rain and floods, has affected wide areas of the country over the last few days.

The are currently over 270 people displaced from their homes, including 112 in Canelones department, 114 in Durazno, 27 in Florida, 16 in Treinta y Tres and 4 in San José. Main highways have been blocked in at least 7 locations and electricity supply interrupted.

The Santa Lucía and Yí rivers are rising and local authorities are monitoring the situation. As of 15 October the Yí River in Durazno was 8.06 m above its normal level, according to SINAE.

Hundreds of Homes Damaged After #Floods and #Landslides in #Guatemala 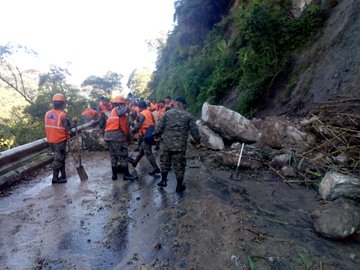 Guatemala’s National Coordinator for Disaster Reduction (CONRED) reported on 17 October severe weather, including heavy rain, floods and landslides, had affected several departments of the country, with Sololá, Sacatepéquez, Retalhuleu and Escuintla among the worst hit.

Currently a spate of severe weather including heavy rain, has affected wide areas of Central America, including El Salvador and Honduras and Nicaragua .

Floods in Nueva Concepción, Escuintla, damaged around 300 homes and affected 1,500 people. The overflow of the Peraz River in San Andrés Villa Seca, Retalhuleu, damaged over 20 homes.

Landslides in areas near Semetabaj and Panajachel in Sololá have led to the closure of major roads, severely disrupting traffic.

The Guatemalan Red Cross has been assisting victims in affected areas of Escuintla, Suchitepéquez and Retalhuleu departments.