Disaster officials in Sri Lanka report that at least 5 people have died after heavy rainfall, lightning strikes, floods and landslides in several provinces of the country.

As of 23 October, 1,661 people were staying in 3 relief camps in Gampaha, Western Province, after flooding forced them from their homes.

The department has forecast further heavy rain, warning, “fairly heavy falls about 75 mm can be expected at some places in Central, Sabaragamuwa, Uva and North-western provinces and in Kaluthara, Batticaloa and Ampara districts.”

Despite the heavy rain only one river was above alert level, according to Sri Lanka’s Irrigation Department. As of 23 October 2019, the Kalu Ganga river in Millakanda (near Bulathsinhala), Kalutara District, stood at 5.58 metres, where alert level is 5 metres and major flood level is 8 metres.

Over 70,000 Displaced as #Rivers Overflow in #Somalia 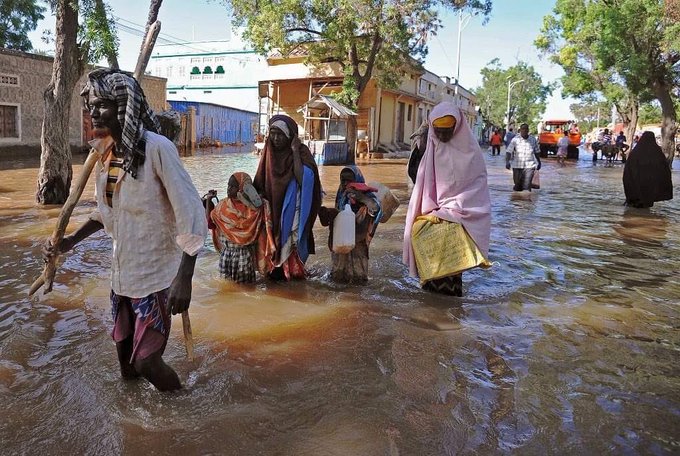 UN Office for the Coordination of Humanitarian Affairs (OCHA) reports that overflowing rivers in Somalia have forced over 70,000 people to relocate to higher ground.

Levels of the Shabelle river have increased after the onset of the Deyr rains about 3 weeks ago. The Deyr rains are seen in Somalia around this time each year, usually lasting from September to November or December.

By 22 October, the Shabelle river level was at 7.8 metres in Belet Weyne, above “High Flood Risk” level.

Almost half of Belet Weyne town has been affected by flooding from the river, along with farmland and surrounding villages, where tributaries of the Shabelle have overflowed. An estimated 72,000 people from Belet Weyne have moved to higher ground in Ceel Jaale highlands and surrounding areas.

“Riverine communities have been asked to vacate their homes to higher ground with immediate effect. The rains will continue in the next seven days and river levels will continue to rise, further worsening the flood situation,” UN OCHA said.

Flooding has also affected Jowhar, where river levels are near maximum, while two major breakages at Maandheere and Dhamasame (Jowhar) have reportedly resulted in flooding, according to the UN.

Recent heavy rainfall and high river levels in neighbouring areas of Ethiopia are likely to worsen the situation in Somalia. The UN said that “flows from the Shabelle with the flood water expected to reach Somalia in a day or two, thus increasing the risk of flooding in the region.”

Water levels are also high along the Juba River basin, with flooding reported in Doolow, Luuq and Bardheere. Somalia Water and Land Information Management (SWALIM) reported on 22 October that 4 people lost their lives in Bardheere, and the floods
have displaced an estimated 750 households; further, 250 livestock drowned, and the waters damaged about 1,200 farms.

Hours of heavy on 22 October, 2019, caused flash flooding across parts of Cairo, Egypt.

Northeastern parts of Greater Cairo were the worst affected, including Nasr City and areas around Cairo’s international airport. Flights were delayed after flooding damaged a terminal building and blocked surrounding roads preventing passengers from reaching the airport.

Locals blamed the city’s poor drainage systems for the flooding, which caused traffic chaos on the city’s streets. Schools and universities have been closed in parts of Cairo, Giza and Qalyubia.

Local media reported that one person died as a result of flooding in 10th of Ramadan City, Greater Cairo.

Earlier Egyptian Meteorological Authority (EMA) had warned of unstable weather in the country which is likely to last until at least Friday 25 October, 2019.

Severe weather has once again hit parts of Spain, with storms and flooding reported in the Catalonia Region. At least 2 people have died and 3 are missing.

One person died and one is still missing after a mobile home was swept away by flooding after the Francolí river burst its banks in Vilaverd, Tarragona.

Two other people are thought to be missing after police found an empty car in the flooded Francolí river in Espluga de Francolí on 23 October. Severe flooding was also reported in other communities along the Francolí river, including Montblanc and Vimbodí.

Catalonia’s emergency services 112 received 1,228 calls for assistance, including 835 for incidents due to heavy rain. The region’s civil protection said that, as of 23 October, there were 53 sections of the Catalan road network affected by floods and landslides.

More than 150mm of rain fell in parts of Pla d’Urgell, which is unprecedented in this area, according to Meteocat.

Parts of southeastern Spain are still recovering after catastrophic flooding in mid-September 2019 when 7 people died and over 3,000 were evacuated.