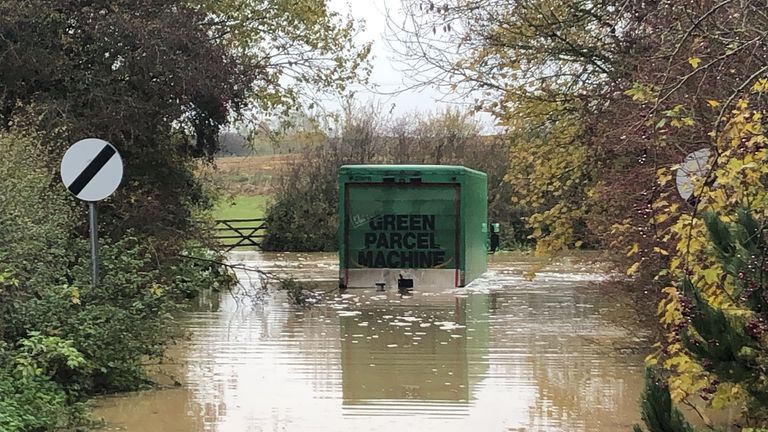 A delivery lorry was stuck in Leicestershire following torrential rain

The Environment Agency has issued “danger to life” severe flood warnings as river levels rise and travel is disrupted across parts of northern England.

It has urged people to stay away from swollen rivers – with the flood warnings affecting the River Don.

Website River Levels UK suggests the river is at its highest ever level at 4.573m at Sprotbrough. The previous record it said was 3.49m on 7 July, 2012.

In addition, some 119 flood warnings – meaning immediate action is required – are in place, most of them in Yorkshire, Greater Manchester, Derbyshire and Lincolnshire.

Residents in affected areas have been told that homes and businesses could flood, fast-flowing water could endanger lives, and some communities could be cut off.

Doncaster Council warned some residents to evacuate their homes because the River Don was breaching its banks near St Oswald Church at Kirk Sandall.

The council tweeted: “There is a Severe Flood Warning in place for Sandal Grove, Old Kirk Sandall. Residents in these areas are advised to evacuate immediately.”

Sky’s Sally Lockwood, who is in Doncaster, said the latest recording showed the River Don had risen to 6.28m – the average is between 0.2m and 3.6m.

Derbyshire Police warned motorists against moving signs where roads have been shut “or attempt to use these routes”.

In Mansfield, 35 homes were evacuated as a precaution after a mudslide, and in Sheffield a major incident was declared by the city council after the River Don burst its banks in some areas, flooding businesses, car parks and roads.

Farooq Sabir , who owns an off licence in Sheffield, said there was not much he could save as his business was flooded within minutes.

He told Sky News he was “knee high in water” and “trying to salvage anything was just impossible”.

At Meadowhall, near Sheffield, hundreds of people woke to find the streets were still flooded in areas after they were forced to spend the night at the busy shopping centre.

Images posted on social media overnight by shoppers and staff stranded at the complex showed them bedding down for the night wherever they could on chairs and benches.

Hannah Crossley, who was at the centre, said she had watched water levels rise until they were “centimetres away from flooding over the wall”.

Luke Turner, who also works at Meadowhall, said he was unable to drive home because the staff car park was flooded.

“For safety reasons the police are keeping us inside Meadowhall. Everyoe has been helpful. There are drinks knocking around, coats, covers to keep us warm. It’s quite a good atmosphere, but a bad situation.”

Prime Minister Boris Johnson tweeted: “Awful to see the terrible flooding across the North of England. Thank you to the emergency staff & volunteers helping families through this difficult time.”

Late last night, an Environment Agency spokesperson said: “We are continuing to work closely with local authorities to reduce the risk of flooding.

“Our field teams have been ensuring flood defences can fully operate and deploying temporary flood barriers to help protect people and property.

“We advise people to stay away from swollen rivers and not to walk or drive through floodwater as just 30cm of flowing water is enough to move your car.”

In Doncaster, South Yorkshire Police warned the public that the flooding was causing “significant issues”, with the force telling locals not to drive or leave their properties unless it is necessary.

Northern Rail has issued “do not travel” advice for customers on several routes – with flooding closing lines between Sheffield and Gainsborough, Sheffield and Lincoln, and Hebden Bridge and Manchester Victoria.

The chief executive of Timpson, the shoe repairs and key cutting high street firm, said its shops in Worksop in Nottinghamshire were under water following the heavy rain and will be closed until next week.

James Timpson tweeted: “I’ve spoken to the team to arrange shop fitters to get there ASAP.”

According to the Met Office, half of the average rainfall for the whole of November fell in parts of the Midlands and Yorkshire on Thursday alone – with more rain overnight.

By 5pm on Thursday, Sheffield had seen 47.2mm of rainfall, while Emley Moor was hit by 40mm.

Rainfall could reach 100mm by this morning, according to forecaster Craig Snell.

Sky’s North of England correspondent, Katerina Vittozzi, who is in Sheffield, said: “The real concern is how long will the floodwater continue to rise even after the rain has stopped.

“The damage already has been quite significant – there are already a number of submerged cars, and some say their businesses are knee-deep in water.

“Residents who have been unable to get home have been sheltered in Sheffield Town Hall, and there are similar setups in other northern towns that have been affected.”