This #Arctic blast is shattering hundreds of records and causing deadly road conditions. And it’s not over in parts of #USA 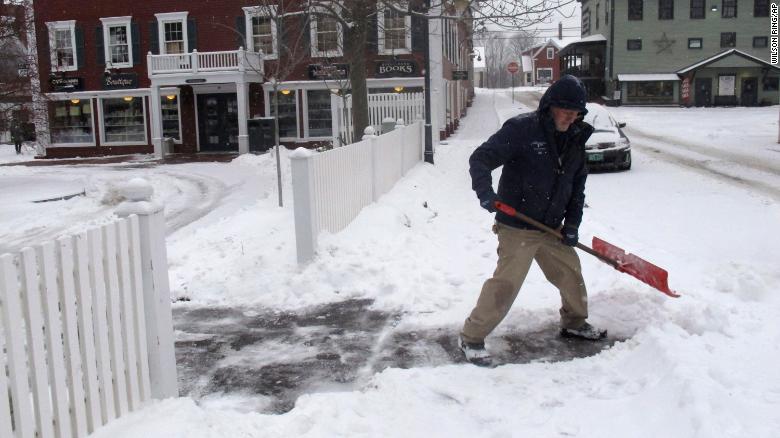 Bill Langley tries to clear a blanket of snow Tuesday from the Green Mountain Inn in Stowe, Vermont

Hundreds of million of people were grappling with bone-chilling weather Wednesday as an Arctic blast grips the eastern two-thirds of the US.

The widespread bitter cold peaked in the morning, when at 7:45 a.m. ET more than 232 million people were in areas 32 degrees or lower. Hundreds of temperature records were set.

The deep freeze is wreaking havoc on travel and has contributed to at least five deaths.

But there’s a shred of good news: After another frigid night, temperatures will draw closer to normal Thursday.

In Ohio, a 16-car pileup during a heavy snowfall Tuesday killed a 21-year-old woman, the Ohio State Highway Patrol said. Several other people were hospitalized after the massive crash.

And in Michigan, three people were killed in a crash Monday during “very poor road conditions,” the Eaton County Sheriff’s Office said.

In Chicago, an 80-year-old man died as a result of cardiovascular disease, with cold exposure as a contributing factor, the Cook County Medical Examiner’s Office said.

More than 150 US flights were canceled for Wednesday, according to FlightAware.com.

“Hundreds of cold temperature records have been set over the last few days, including some dating back over a century to 1911,” Hennen said. The freezing temperatures made it as far south as Houston, New Orleans and the Florida Panhandle, he said.

Much of the eastern half of the country will continue below normal temperature-wise through the weekend, but each day will be slightly warmer.

The NWS compared this Arctic outbreak to the 1911 “Blue Norther.” Within a day, record-breaking cold temps in the 20s were followed by record-warm temperatures near 80 degrees for much of the Plains to the East Coast.

While this week’s temperatures will rise across much of the country Thursday, they’ll still be 10 to 20 degrees below average, Guy said.

Temperatures that were below zero Tuesday through the Upper Midwest have started to moderate, Hennen added.