AN ISLAND resident has found five dead dolphins on the beaches in just a few weeks.

Joe Truman, of St Lawrence, found the bodies of the mammals on walks along the coastline before and after Christmas.

He has reported the findings to the Cetacean Strandings Investigation Programme (CSIP).

County Press photographer Paul Blackley took a picture of one of the dolphins, along the high tide line at Compton, surrounded by plastic and other waste which has been washed ashore.

The others were found at Compton, Watershoot Bay and St Lawrence.

All five carcasses were of approximately the same size and Joe fears they were from the same pod, and could have been affected by the recent visit of supertrawler Margiris.

24,500 pigs to be killed due to swine fever in Bulgaria #pigs #SwineFever #Bulgaria

Bulgarian veterinary authorities said on Friday they would cull 24,000 pigs after detecting an outbreak of African swine fever at a pig farm in the northeast of the country.

Reuters reports that the outbreak is the first at an industrial farm since August when the virus hit six breeding farms in the Balkan country, forcing the vet authorities to cull over 130,000 pigs.

The outbreak was detected at a farm in the village of Nikola Kozlevo in the region of Shumen, the Bulgarian Food Safety Agency said. The presence of African swine fever (ASF) was confirmed in the herd through laboratory tests.

In an interview televised by Bulgarian National Television, food safety agency head Professor Paskal Zhelyazkov said that the “infection has penetrated the site so extensively” that measures to separate and save un-affected pigs would not be possible.

Bulgaria has been developing its biosecurity protocol over the last 12 months as, according to a recent report by The Sofia Globe, 42 outbreaks of ASF were confirmed in Bulgaria in 2019. 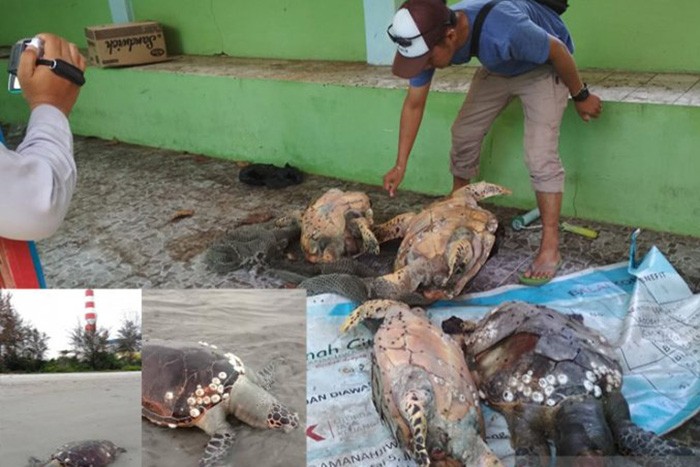 A total of 25 turtles were found dead in Sepang Bay in Bengkulu. (bengkulu.antaranews.com/-)

A total of 25 dead turtles found in the waters of Sepang Bay in Bengkulu, with the latest discovered on Friday, may possibly have been killed by rising sea temperatures, an expert has said.

A marine science lecturer from Bengkulu University, Dewi Purnama, said marine biota live in an environment with temperatures ranging from 28 and 30 degrees Celsius.

“The temperature in the waters of Bengkulu has risen to between 27 and 31 degrees Celsius. Naturally, an increase of just one degree is still considered high,” she said recently, Antara news agency reported.

“I don’t have the capability to declare whether the cause of death of the turtles in Sepang Bay has anything to do with power plant’s liquid waste disposal that might affect the sea temperature without further examination,” she added.

The plant she referred to is the Teluk Sepang coal-fired power plant.

Each marine animal or plant needs a certain temperature for living and has various tolerance rates for maximum and minimum temperatures, she said.

When the temperature of their environment rises drastically, physiological disruptions occur. Marine biota that cannot adapt to the changes may die.

The Kanopi Bengkulu ecology protection foundation has recorded that 25 protected sea turtles have been found dead in the area over the past three months.

“Because the majority of dead turtles were found near the sewer,” he told The Jakarta Post on Monday.

A laboratory report done by the Bengkulu Natural Resources Conservation Agency had not been released even though the examination was done more than one month ago, he said.

Hundreds of dead fish have washed up on beaches in French Polynesia’s Society Islands.

Pictures on social media show an array of fish on beaches on Raiatea and Bora Bora, with more floating in the lagoon.

It is not clear what caused the fish death.

According to local media, some believe they died because the water in the lagoon wasn’t refreshed while others believe the water had become too warm.

However, the mayor of Bora Bora told local television that it was a recurring natural phenomenon which happened every 20 years.

The sudden death of thousands of goldfish in the Asso canal – probably dead from drought, but perhaps not – reopens a wound. The stream, in fact, is the final address of some consortium purifiers and is the subject of a detailed complaint (dating back to 2016) to the Public Prosecutor’s Office by the managers of the environmental associations in the area.

A complaint of which nothing is known. Silence that suspects many citizens who would like clarity. Yet the biologist and researcher Giampiero Dantoni has over and over again on the heavy and probable pollution of the waters. But, above all, on an important background “mystification”: the discharge of wastewater “underground and on the water table” is absolutely prohibited by law.

The discharge in the Asso torrent is defined as “delivery to a non significant surface water body” and not “delivery to the subsoil” as it is. As if all the wastewater disappeared by evaporation and absorption into the soil.

On paper, the waterway does not deliver to the Colucce vora. The Asso torrent is defined as “water basin with entry into the sea”, thanks to the creation of the “spillway”, a surface channel used for the “overflow” and which leads to the Frascone sea. 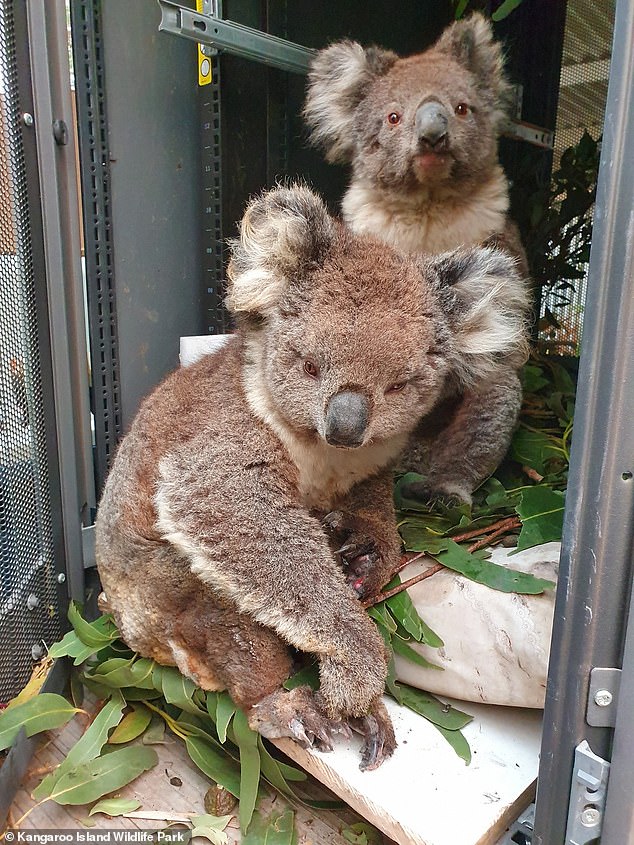 Rescuers are frantically searching Kangaroo Island for injured animals amid fears over half of its 50,000 koala population perished in Friday’s devastating bushfire.

Thousands of charred bodies of native animals were littered across the West End Highway, including wallabies and koalas, after the animals tried to escape the inferno at Flinders Chase National Park.

Sam Mitchell, Kangaroo Island Wildlife Park co-owner, said his team is rescuing survivors as quickly as possible ahead of worsening conditions in the coming days.

‘There is no food left, for those (animals) who didn’t perish in the fire, a lot of them will starve to death,’ he told The Advertiser.

Mr Mitchell said the island has ‘gone from one extreme to the other’, recalling suggestions the island’s koalas should be culled in past years.

‘People would talk about koalas being a pest species … but now there are a lot of koalas (which) perished in the fires,’ he said.

Mr Mitchell said it could take years for the native wildlife to recover.

The death of hundreds of tons of fish in a cage in Way Rarem, Abung Pekurun Subdistrict, North Lampung makes the farmers lose money.

Inca, a fish farmer in Way Rarem, said that at present there are no more dead fish in their cages.

At that time, the Inca claimed that only fish in their cages had died, while this year almost all breeders had experienced it. 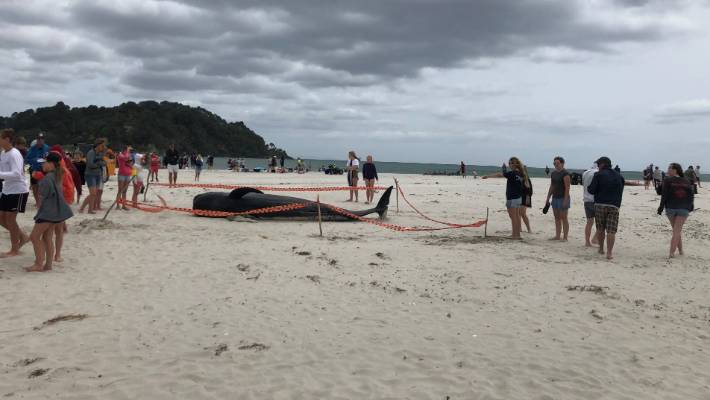 The seven whales that survived a grounding at the Matarangi Spit have been shepherded out of the Matarangi Harbour by boats across the bar and out to sea.

A spokesperson from the Department of Conservation said the whales “were seen swimming strongly and being active and it’s hoped they will remain at sea.”

DOC staff are burying the four dead whales above the high tide mark at Matarangi together with local iwi who have worked closely with DOC staff in managing the stranding and refloat.

“We’re asking people in the area to keep an eye out for the refloated whales possibly re-stranding in the next 24 hours or so. If people see any stranded whales please contact DOC’s 24-hour number 0800 DOC HOT (0800 362 468),” the spokesperson said.

They also expressed thanks to everybody that has helped with the whales on the beach and in successfully refloating them this afternoon.

Earlier, DOC had said seven of the pilot whales stranded on Saturday morning at the Matarangi Spit are being escorted by boats out towards open sea.

“Hopefully the whales will make their way safely out to sea,” a Department of Conservation spokesperson said.

Four whales that died in the stranding are being buried above the high tide mark at Matarangi.

Attempts had been ongoing to move the surviving pod out of the estuary.

The pod became stuck at Matarangi Spit on Saturday and 1000 people, including locals and Department of Conservation staff had been working for hours to rescue them.

On Saturday afternoon a DOC spokesperson said seven whales had been refloated “but the whales have swum into the estuary”.

“Four boats are trying to herd the whales out to sea.”

Two calves were among the group, one of which is also among the deceased.

“DOC staff are leading the stranding response and there are around 1000 people who’ve come to help with the whales,” the spokesperson said.

“At the moment the surviving whales are being cared for on the sand by volunteers who are keeping them comfortable, covering them with sheets with buckets of seawater being gently poured over them to help protect their skin from drying and to keep them cool.”

“We do not need more people to assist with the whales. We have plenty of help which we appreciate.” 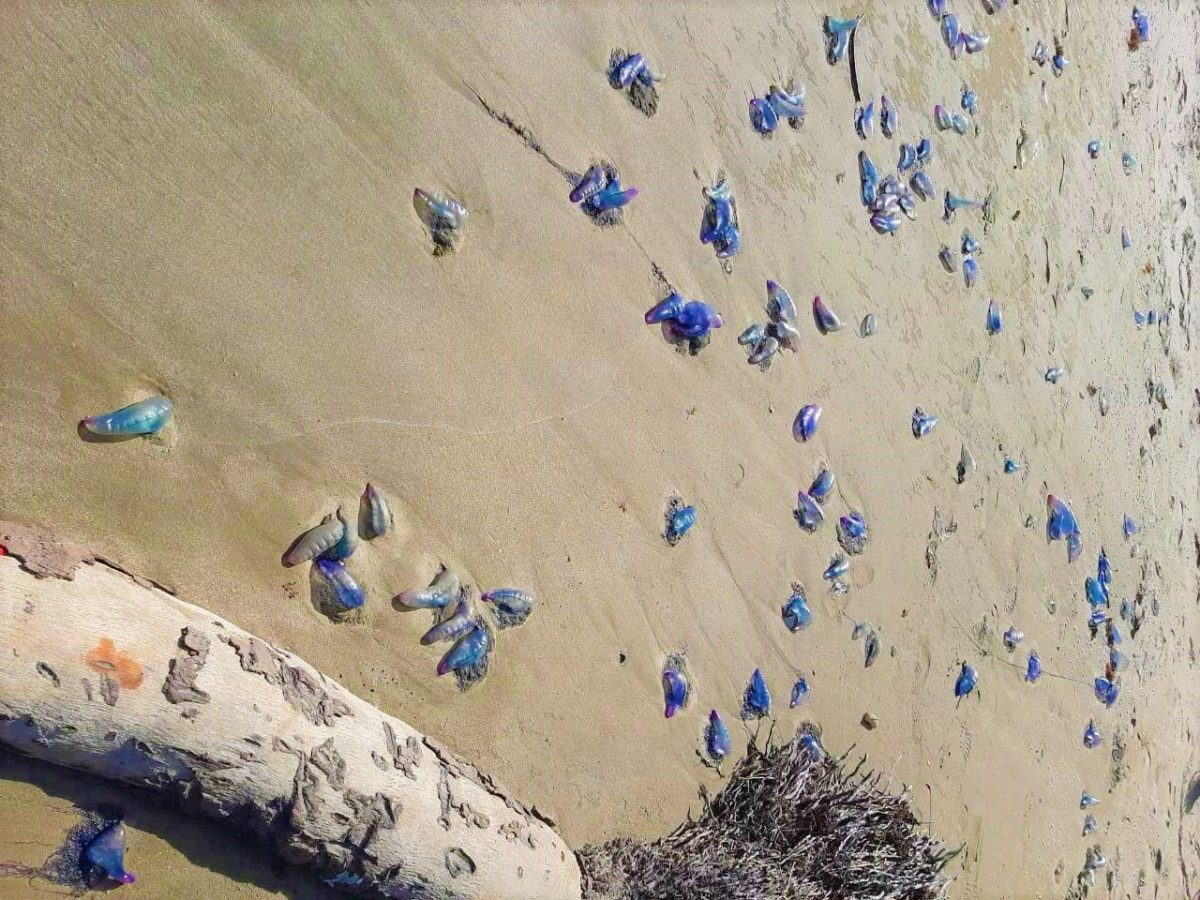 The Portugese Man O’ War, a marine animal that resembles a jelly fish, continue to wash ashore in unprecedented numbers along the beaches on Trinidad east and north coasts.

These organisms classified by the Institute of Marine Affairs as a dangerous marine creature, are known as siphonophore.

There differences between jellyfish and the Portugese Man O’ War.

Doctor Judith Gobin a clinical ecologist and Lecturer at the University of the West Indies St. Augustine told the Express yesterday: “The Portuguese man o’ war is often called a jellyfish as it looks like one. It is easily recognized by its balloon-like float, which may be blue, violet, or pink and reaches to about six inches above the water. It is actually a species of siphonophore, another group of animals that is closely related to jellyfish.”