VERY POWERFUL INFLUX OF ENERGY WILL STRIKE THE WEAK MAGNETOSPHERE ON 14th – 15th February 2020. FURTHER EARTHQUAKES, VOLCANO ACTIVITY AND ADVERSE WEATHER WILL BE GREATLY INFLUENCED BY THE COSMIC RAYS STRIKING THE EARTH’S CORE
**BE ALERT**

Two prisoners are being tested for coronavirus in Oxfordshire.

The men are inmates at Bullingdon prison, near Bicester, and are being kept in isolation in their cells, Sky News can confirm.

Access is being restricted to one wing where the prisoners are.

The prison, which has capacity for 1,114 inmates, remains operational and Public Health England are on site helping to manage the situation.

Bullingdon holds both prisoners on remand and who have been sentenced, as well as young adults between the ages of 18-21.

As the prisoners were being tested, the World Health Organisation announced the new coronavirus will be called COVID-19.

WHO director general Tedros Adhanom Ghebreyesus said the first vaccine could be ready in 18 months “so we have to do everything today using available weapons to fight this virus”.

Eight people in the UK have been confirmed as having coronavirus, with the last four testing positive on Monday.

They are linked to Hove businessman Steve Walsh, who is believed to be a “superspreader” after 11 people he stayed in a French chalet with contracted the virus after he was infected in Singapore.

Coronavirus could infect more than 60 per cent of the global population if containment methods fail, a top Hong Kong medical official has warned.

Professor Gabriel Leung, chair of public health medicine in the city, also said that even if the death rate reaches just one per cent, the potential spread means it could still kill thousands of people.

Prof Leung told The Guardian during a visit to London that the priority now is to establish the size and shape of the ‘epidemic iceberg’.

Most experts believe that each infected person has gone on to transmit the virus to around 2.5 people, giving an ‘attack rate’ of 60 to 80 per cent.

The death rate, however, is thought to be much lower. Prof Leung expects it to be around one per cent once milder cases, that have not been diagnosed, are taken into account.

‘Is 60 to 80 per cent of the world’s population going to get infected?,’ he asked, ‘Maybe not. Maybe this virus will come in waves.

‘Maybe the virus is going to attenuate its lethality because it certainly doesn’t help it if it kills everybody in its path, because it will get killed as well.’

After establishing the epidemic’s scale, he said they would then need to establish whether containment methods being used are effective at stopping the spread of the virus.

Governments worldwide are currently focusing on containment to prevent the spread of the virus but, if it fails, this response will switch to mitigation.

China locked-down cities infected by coronavirus, including Wuhan at the virus’s epicentre, in a desperate effort to stop the disease spreading.

Cruise ships such as the Diamond Princess off the coast of Japan have been isolated after coronavirus cases were identified, and many countries have isolated travellers returning from Wuhan and other areas of China.

There have been allegations that China has not accurately reported the spread of coronavirus and the number of people killed by it, making the virus’s ‘infection iceberg’ harder to figure out.

Wuhan medic Jeisi Luo, not his real name, warned that there are likely many more infections than reported due to limited test kits and the fact that people are dying before they are diagnosed.

‘When preliminary tests determine that a patient has a lung sickness, the nucleic acid test which detects the virus, cannot always be carried out because the waiting list is too long,’ he said. ‘The patient is therefore not diagnosed.’

Medics are instead dealing with the crisis by sending people home with medicine and advising them to ‘self-isolate’.

Social media reports have also alleged that China’s body burning facilities in Wuhan are working flat out, suggesting that the death toll from the virus may be significantly higher than the country has reported. 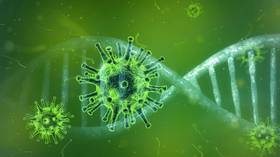 Scientists in Brazil have discovered a virus which appears to be almost entirely new, consisting of unrecognizable genes that have been, until now, undocumented.

The Yaravirus (Yaravirus brasiliensis), named after a water deity in Brazilian mythology and folklore, was discovered in Lake Pampulha in the Brazilian city of Belo Horizonte.

In recent years, virologists and other researchers have discovered a variety of new viruses which challenge traditional thinking, including so-called “giant viruses” (named for their large protein shells, not their deadliness to humans).

These giant viruses possess a far more complex genome than scientists could have predicted, based on humanity’s knowledge of normal viruses, and are capable of repairing and replicating their own DNA.

“Contrary to what is observed in other isolated viruses of amoeba, Yaravirus is not represented by a large/giant particle and a complex genome, but at the same time carries an important number of previously undescribed genes,” the authors write, adding that it may be the first in “a new lineage of amoebal virus with a puzzling origin and phylogeny.”

In fact, 90 percent of the genes in the Yaravirus have never been described before in public scientific databases and literature.

Rather worryingly, the researchers conclude that the amount of unknown proteins within the Yaravirus throws open the door to a whole other world of as-yet-undiscovered viruses we know little to nothing about.