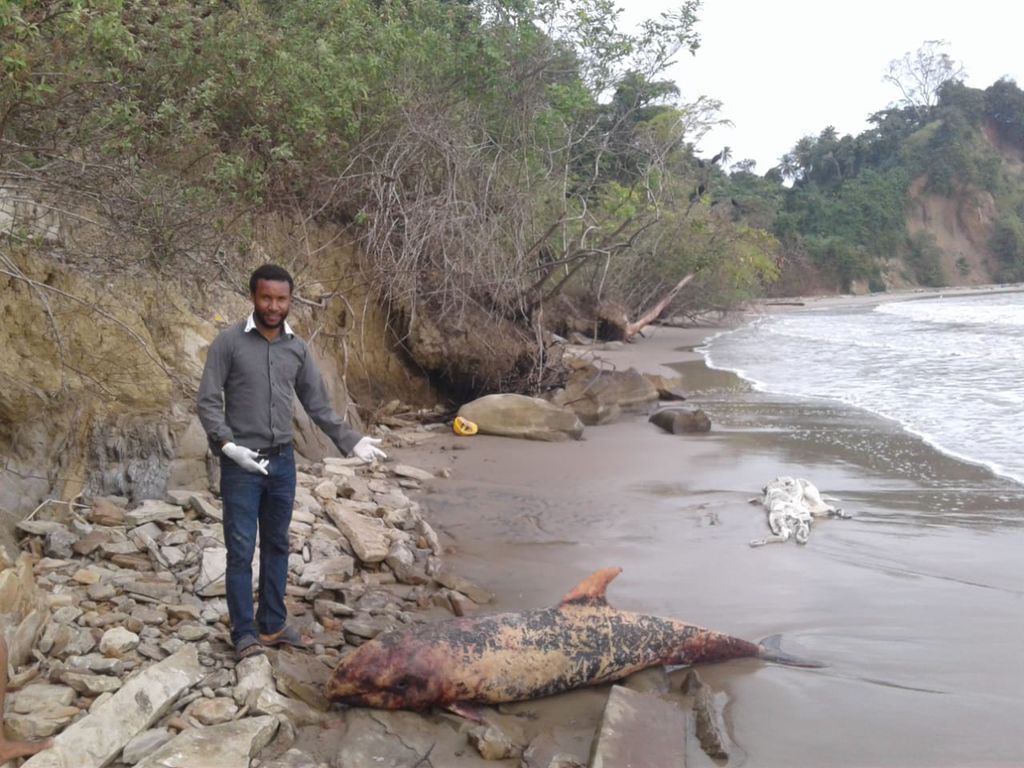 Eric Lewis, curator of the Moruga museum, stands next to a dead whale which washed up at the La Lune beach in Moruga

A fourth whale beached at La Lune Beach yesterday. It was spotted on the shoreline around 6 am. Residents, game wardens and the police assisted in lifting the whale onto the tray of a pick-up and transporting it to another beach where it was guided back out to sea.

Hours later, at around 4 pm, two dead whales washed ashore at another area of the beach. Then at around 12.30 pm, another dead whale was spotted on the shore about a mile away from where the two other whales beached. Moruga museum curator Eric Lewis has taken possession of the three carcasses.

What exactly is causing the whales to die is not yet known, but the T&T Marine Mammal Stranding Network (TTMMSN) has warned members of the public not to touch the stranded marine mammals. Veterinarian Dr Wade Seukeran said the TTMMSN has responded to reports of stranded melon-headed whales at various coastlines and necropsies performed on some of the whales revealed that they died from a disease.

According to the TTMMSN, marine mammals that wash ashore are typically ill and could be harbouring infectious organisms that may be harmful to humans and other animals.

“Further, it is advised to NOT push, pull or drag live stranded marine mammals back into the water.

“Though well-meaning, this action often does more harm to the animal than good, as such ill animals are predisposed to drowning. The public is therefore again urged to avoid handling and/or consuming marine mammals that wash ashore, as this may pose a significant public health risk,” the TTMMSM said in a release. 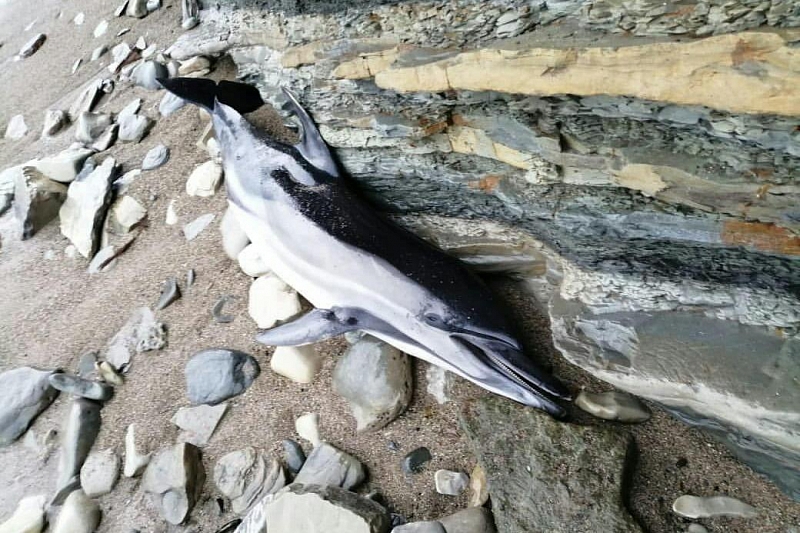 From the very beginning of February, active calls began on the “hot line” of the center. So, on February 4, four outliers were reported at once: a depleted white barrel in Gelendzhik with traces of getting into the net, a white barrel in Vityazevo and an azovka albino in Lazarevsky. The remains of another dolphin were found in Dzhemete, the dolphin rescue center reported.

Specialists noted that in the center there are not enough volunteers in different regions of the region.

“The emission season will begin soon.” Last year, from March to May, we received 5-10 calls per day. We always need active volunteers on the coast of the Krasnodar Territory, ”Delpha noted in the center.

This year, employees of the Sochi Rescue Center recorded more than 150 cases of dolphin deaths in the Krasnodar Territory. Experts note that a significant part of marine mammals died due to the fault of nets.

Experts recommend in no case to get dolphins out of the sea – this is a huge stress for the animal. First of all, in such situations it is necessary to call the Delpha center, describe the situation and receive recommendations for action.

Dead fish are lining the shores of Walkers Lake in Avon Plains.

A Northern Grampians Shire spokesperson said Council was aware of a fish kill event, involving redfin and some golden and silver perch.

In November, the Shire issued a warning for the lake after algal bloom was detected

The spokesperson said there was a significant algal bloom over the last month or so at the lake and there was a history of summer blue-green in the system.

“There has been some decomposing weed and blue-green algae present in the water recently and the likely cause of the fish kill appears to be a severe lack of oxygen in the water,” they said. 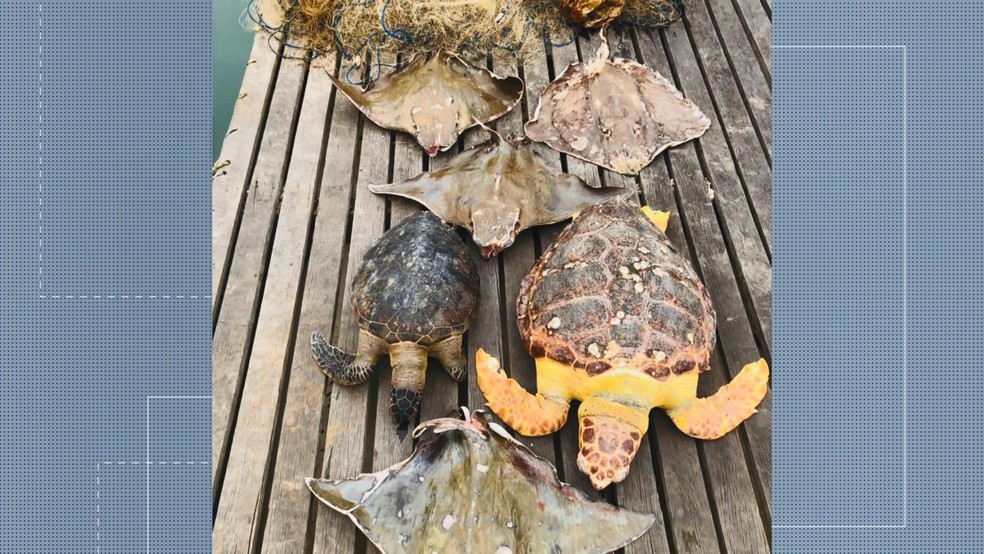 About 25 turtles are found dead per week by groups of environmentalists in Vitória because of fishing nets in prohibited places. In 2020, the city hall of the capital seized almost 20 thousand meters of nets in seven operations to combat illegal fishing in the municipality, in partnership with environmental agencies.

The undersecretary of Environment of Vitória, Ademir Barbosa, explains that the inspection is carried out in places where fishing is prohibited. This area of ​​environmental protection is called Baía das Tartarugas and comprises the Port of Tubarão to the Farol de Santa Luzia.

Thousands of flamingos dead due to disease in Mazandaran, Iran #flamingos #Iran 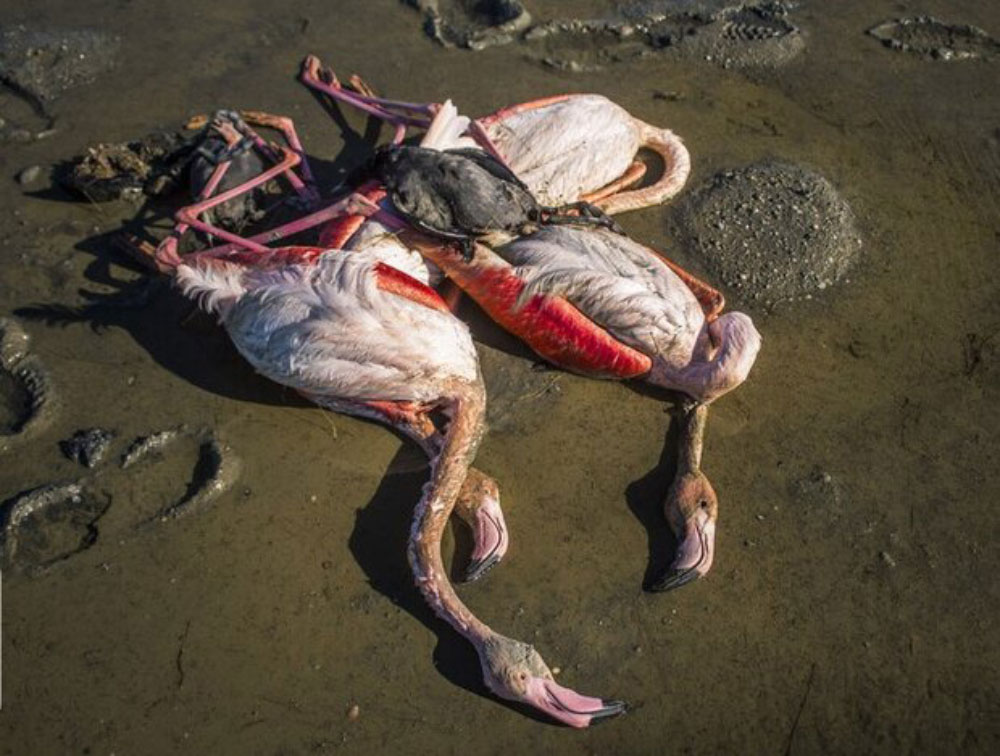 Upward of 10,000 birds have been found dead at the Miankaleh peninsula, situated on the Caspian Sea shore in north-east Iran, in recent days.

According to Hossein-Ali Ebrahimi, head of Mazandaran province’s department of environment, the corpses involve many different species, including Greater Flamingos, as well as ducks and grebes.

Ebrahimi noted that a group of experts from Iran’s Department of Environment (DoE) has been sent to Mazandaran province to investigate the cause of the migratory birds’ deaths. The carcasses were being collected for testing, with most being buried with sanitary precautions taken.

He said the DoE has banned hunting of migratory birds in the eastern parts of the province, where Miankaleh is located, until the investigations are carried out, adding that in order to maintain human health, the sale of any migratory birds in nearby cities would also be suspended until the exact cause of the deaths is known.

Influenza has already been ruled out as a cause of the mass die-off, but the reason for the shocking event remains unclear. While it is possible that this is a human-induced event, with deliberate poisoning carried out, the most likely explanation is natural water contamination through poisoning by algae and/or plankton, causing botulism. A similar event occurred in Rajasthan, north-east India, in November 2019.

Miankaleh is a narrow and long peninsula situated in the extreme south-eastern part of the Caspian Sea, covering an area of more than 68,800 ha. The peninsula is 48 km long, between 1.3 and 3.2 km wide, and sets apart the Gorgan Bay from the Caspian Sea. The wetland there is a wildlife sanctuary and hosts huge numbers of waterbirds throughout the seasons.

Miankaleh was registered as a wetland of international importance under the Ramsar Convention in 1975. Then, in 1976, the peninsula was declared a biosphere reserve by UNESCO.

The reserve’s ecological importance is particularly highlighted by the 250,000 migratory birds it hosts in winter, including Dalmatian Pelicans, Russian White-fronted and Greylag Geese, and White-headed Duck.

Hundreds of pigs have died from African swine fever in Bali, authorities said Wednesday, marking the Indonesian holiday island’s first recorded outbreak and after the virus claimed some 30,000 hogs in Sumatra.

“The results are positive for African swine fever,” Ida told reporters, referring to tests performed on the dead animals.

The string of deaths had appeared to stop over the past week, Wisnuardhana said, adding Bali would go ahead with a pork festival on Friday in a bid to ease concerns over the outbreak.

The announcement comes after Indonesia said this week it would temporarily ban some livestock imports from China over fears about the coronavirus, which has killed almost 500 people in China, where it originated.

National Parks Board (NParks) officers are looking into the cause of hundreds of fish deaths along a stretch of beach in Pasir Ris.

The silver-coloured fish, as well as several crabs, were spotted washed up at Pasir Ris Park on Monday morning (Feb 3).

Three cleaners were seen along the approximately 150m stretch of shoreline clearing the dead animals into large bags at about 8am.

NParks coastal and marine director at the National Biodiversity Centre Karenne Tun said that based on preliminary findings, the fish were mostly of the Hilsa kelee species, which is part of the clupeid family of wild fish found in Singapore’s coastal waters.

“NParks officers did not observe any dead fish or biodiversity along the surrounding coastal areas along Changi Beach, East Coast Park and Pulau Ubin, including Chek Jawa,” said Dr Tun.

There were also no reports of fish deaths at the nearby fish farms, she added.

NParks officers will continue to monitor the coastal beaches for anomalies and look into the cause of the fish deaths.

In April last year, thousands of fish died in the waters near Lim Chu Kang jetty and in nearby fish farms.

Fish farmers in the area sent motorboats out to remove and dispose of the dead fish that had surfaced in the sea.

Saudi Arabia has reported an outbreak of the highly pathogenic H5N8 bird flu virus on a poultry farm, the World Organisation for Animal Health (OIE) said on Tuesday.

The outbreak, which occurred in the central Sudair region, killed 22,700 birds, the OIE said, citing a report from the Saudi agriculture ministry.

The case was the first outbreak of the H5N8 virus in Saudi Arabia since July 2018.

Tons of fish appeared dead on the surface of the Vermelho and Araguaia rivers, in Aruanã, in the interior of Goiás. Videos recorded by residents show the fish floating in the water (see above). The Environment delegate, Luziano Carvalho, speaks in tons already collected this Monday (3), when the images were more strongly shared on social networks.

What draws the delegate’s attention is that the fish that appears in the images is the cascudo, a resistant species that is difficult to be contaminated. For this reason, the researcher initially works with the line that someone polluted the Rio Vermelho, even if in a guilty way, that is, without intention.