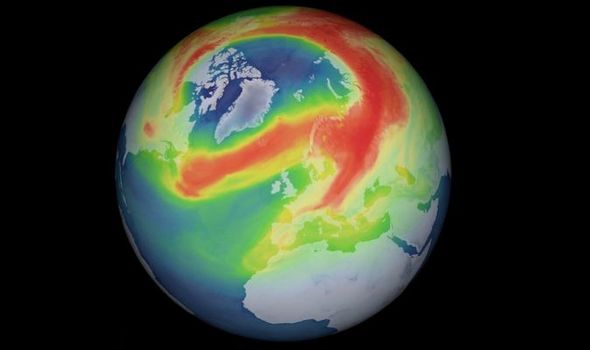 AN UNUSUAL hole has opened in the ozone layer above the Arctic, data from European satellites have revealed.

Holes in the ozone layer typically form over the Antarctic, in the southern hemisphere, but scientists have noticed an “unusual” hole in the ozone above the Arctic this year. Data from the European Space Agency’s (ESA) Copernicus Sentinel-5P discovered a sharp decrease in ozone levels above the upper echelons of the northern hemisphere.

Scientists from the German Aerospace Center (DLR) noticed the unusually strong depletion of ozone, something which is not usually associated with the Arctic.

Mini ozone holes have sporadically appeared in the ozone above the Arctic before, but the team state that they have seen nothing on this scale in previous years.

The researchers said the strong ozone depletion is down to unusually cold conditions in the atmosphere, including freezing temperatures in the stratosphere, causing the hole to grow exceptionally larger.

According to the research, freezing and powerful winds flowing around the North Pole trapped cold air within what is known as the ‘polar vortex’.

When the polar winter ended and the first sunlight hit, polar winters can see up to four months of night, the atmosphere in months, it triggered a reaction which caused the ozone to deplete.

Diego Loyola, from the German Aerospace Center, said: “The ozone hole we observe over the Arctic this year has a maximum extension of less than one million sq km.

“This is small compared to the Antarctic hole, which can reach a size of around 20 to 25 million sq km with a normal duration of around 3 to 4 months.”

“In this time, we have not witnessed an ozone hole formation of this size over the Arctic.”

Scientists discovered the ozone layer, particularly over the Antarctic region and as far up as Australia, had depleted in the 1970s.

The ozone layer is a layer of the atmosphere which sits about 10 kilometres above the Earth’s surface and protects life from ultraviolet radiation from the Sun.

As the ozone layer began to thin, more lifeforms, including humans, were exposed to stronger solar rays which increase the likelihood of cancer.

The researchers put the restrengthening of the ozone layer down to the 1987 Montreal Protocol which was an international treaty that banned chemicals such as chlorofluorocarbons (CFCs) and other ozone-depleting substances (ODSs) which were found to be weakening the atmospheric layer.