Kp Index is at level 5
Scale of G1
Minor 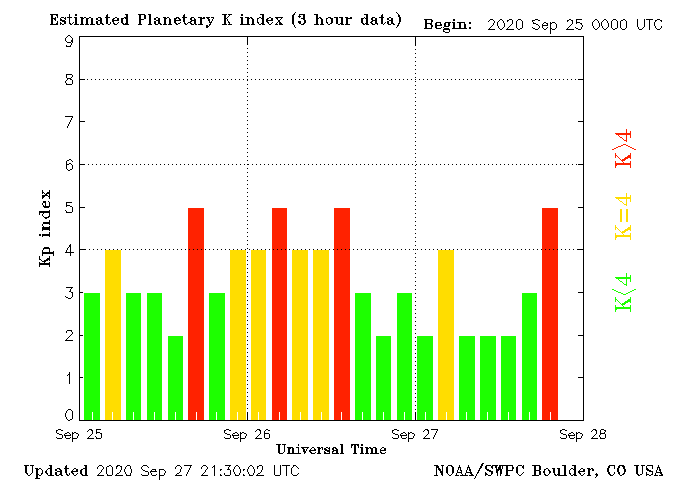 Floods triggered by heavy rains in the past few days have wreaked havoc in various parts of the country.

At least four people died, 17 houses were swept away and dozens of houses were waterlogged in separate incidents of monsoon-induced disasters in Rupandehi and Makwanpur districts on Friday night and Saturday.

“Her body was recovered at Chankipur in Butwal-15 on Saturday morning,” he said.

According to the Area Police Office in Butwal, the floods in Tinau, Danab and other rivers in Rupandehi swept away 17 houses and damaged 24 others in the past 24 hours. Six people sustained injuries while around 100 houses were inundated in the disaster.

Police said five persons were injured when the floods in the Danab river destroyed the house of Prabhawati Mallaha in Debandi settlement of Sammarimai Rural Municipality. Khadga Bahadur Khatri, the spokesperson at the District Police Office in Rupandehi, said the injured were receiving treatment at Bhim Hospital in Bhairahawa. Similarly, a woman was injured when her house collapsed in Lumbini Sanskritik Municipality-13. She was taken to a neighbouring Indian town for treatment.

Similarly, the flooded Tinau river entered a settlement in Butwal-17 and swept away six houses. As many as 36 families have been displaced by the inundation.

In Butwal-4, the floodwaters from Chure hill swept away three houses in Gairiguan and displaced 16 households.

The flooded Tinau and Danab rivers have wreaked havoc in several settlements of Sammarimai, Mayadevi, Marchawari, Kotihima and Lumbini Sanskritik and inundated hectares of paddy fields in the area. According to Jitendra Nath Shukla, chairman of Sammarimai Rural Municipality, wards 3, 5 and 7 were hardest hit by the floods.

“Around 40 families have been displaced by the floods. They are now taking shelter in the houses of their relatives and neighbours,” said Shukla, adding that the local body would distribute reliefs to the flood victims on Sunday.

Chief District Officer Pitambar Ghimire, who is also the chairman of the District Disaster Management Committee, said several settlements were affected, as the floods damaged many houses and paddy fields.

“We will assess the damage soon and provide relief to the victims,” Ghimire said.

In Makwanpur, three persons were swept away in separate incidents of floods on Saturday. According to Deputy Superintendent of Police Sushil Singh Rathour, Priyanka Soni of Birgunj was swept away by the Trikhandi stream in Bhimphedi. Likewise, the flooded Chaukitar stream in Kailash and Jyamire stream in Hetauda swept away two persons. Police identified the deceased as Dhawa Syangtan of Kailash and Putalimaya Ghalan of Hetauda-19.

According to the reports, five people were buried alive under debris in a massive landslide incident that took place at Lower Lumparing area in Meghalaya’s capital city Shillong on Friday.

Several houses were destroyed in the landslide incident.

Following the incident, teams from Fire and Emergency Services, State Disaster Response Force (SDRF) and police had rushed to the area and engaged to rescue the victims.

Two bodies were recovered from the debris and three others are still missing.

Due to incessant rain, it has become more difficult for the rescue teams to find out other three victims.

The deceased were identified as 35-year-old Rejiya Ahmed and 45-year-old Saira Ahmed.

In a separate incident, two people were killed and one is missing as flash flood triggered by incessant rain washed away a vehicle where they had travelled in West Khasi Hills district.

The driver of the vehicle and a minor girl died in the incident and one person is still missing.

On the other hand, a 12-year-old girl died in a separate landslide incident.

On Saturday, two people were killed in a massive landslide at a police reserve in Shillong.

Seven others were injured and 14 houses, several streets and crops were damaged, he added.

“The rain was the heaviest in the last ten years. Huong’s and Yen’s houses stood right next to a hill, and the drenched soil slid onto the walls and crushed the victims,” Dung said.

Since Saturday night, northern Vietnam has experienced heavy rains and winds caused by cold air moving downwards from the north. Mountainous areas should expect rainfall of up to 120 mm within 24 hours, meteorologists said.

Natural disasters, mostly floods and landslides, killed 133 people in Vietnam last year and caused losses worth around VND7 trillion ($303 million), according to the Ministry of Agriculture and Rural Development.