A head-on collision between a 40feet container truck and a petrol tanker has resulted into an explosion on the Otedola Bridge along Lagos/Ibadan Expressway on Saturday.

The News Agency of Nigeria reports that the accident occurred at 2am when the 40ft containerised truck, loaded with fabric, had a brake failure while moving inward Berger.

In the process, the truck collided with a tanker loaded with 33,000 litres of PMS.

The impact of the collision resulted in a fire explosion.

Oke-Osanyintolu said: “On arrival at the incident scene it was discovered that a 40fit containerised truck loaded with fabric had a brake failure while moving inward Berger.

“The truck collided with a tanker loaded with 33000 litres of PMS (petrol) while the impact of the collision resulted in the fire outbreak.

“No casualty was recorded.

“However, the fire affected the 40ft containerised truck and high tension wire at the spot.”

Oke-Osanyintolu advised commuters to take the Ojota or 7UP exits until the backlog of traffic eases.

The LASEMA boss said the damping down has been concluded, while the agency’s equipment would remove the vehicles from the thoroughfare.

A resident of the area, Johnson Adeoye, told NAN that the tanker lost control and rammed into a trailer with the container.

Adeoye said upon the crash, there was fire outbreak, which led to the explosion.

There have been two fire outbreaks occasioned by the explosion of tankers conveying gas in the state. 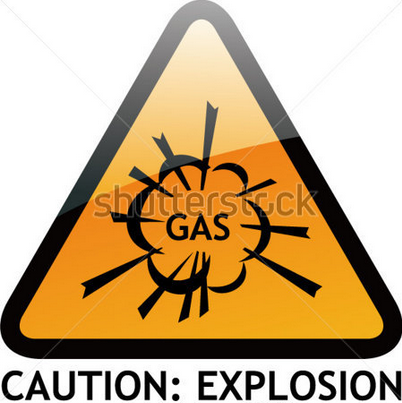 The strip mall contained a vape shop, musical instrument store and recording studio, according to the Daily News-Record. It was a “total loss,” city spokesman Michael Parks said. Damage was also reported to other structures.

Although Gov. Ralph Northam tweeted that state emergency personnel had been deployed to the area after what he called a gas explosion, Harrisonburg Fire Chief Matt Tobia told reporters the cause was under investigation.

Harrisonburg, in Virginia’s Shenandoah Valley, is a city of around 50,000 that’s home to James Madison University.

The university said in a Facebook post that three students from the school’s Army ROTC program who had been participating in a 10-mile race were among those injured. The building where the blast occurred was about 30 yards (27 metres) from the race’s start and finish line, the school said.

One of the students was hospitalized but was expected to be quickly released, JMU said. Two other students were treated at the scene and released, according to the post.

The university said the other two injured people were not affiliated with JMU. The city’s update, posted on Twitter around 5:30 p.m., said they had been flown to the University of Virginia’s medical centre in serious condition and were “now stable.”

Parks said it wasn’t immediately clear if those victims were affiliated with one of the centre’s businesses.

Tobia said when crews arrived, the injured were outside of the structure.

Families who lived nearby told TV station WHSV the blast shook their homes.

“It woke me up personally and I mean, I knew right away that it was something not normal,” Katie Landes told the station. “So, I looked right outside the window that was right by me and I saw that there was the beginning of some serious smoke going on.”

Landslide in northern Pakistan buries bus with 15 onboard

Pakistani police say a landslide in the country’s north has buried a minibus with 15 passengers onboard. The landslide on the mountainous road in the scenic area of Skardu pushed the bus into a deep ditch and buried it under tons of mud and rock. Police said the chances of finding anyone alive are bleak, but rescue workers and local volunteers are attempting to dig through the mud in search of survivors. Landslides after heavy rain are common in Pakistan, and are the cause widespread damage in areas of mountainous terrain.

Six workers suffocated on Saturday while trying to clean a chemical tank of a garment company’s factory near Naurus Chowrangi in the SITE Industrial Area.

After receiving information that some workers were trapped in a chemical tank, police and rescue workers from different welfare organisations arrived at the factory and took the six victims to a nearby private hospital, where doctors pronounced them dead on arrival.

Their bodies were later taken to the Jinnah Postgraduate Medical Centre, where a medico-legal officer examined them and confirmed that the six workers had suffocated. Police said that the tank of the garment factory was

full of chemicals and the workers had been trying to clean it when they lost consciousness.

They added that according to their preliminary investigation, the six workers had suffocated due to a poisonous gas because the tank contained a chemical substance.

Officials said that the tank was approximately 50 feet deep and it was half filled with chemicals, adding that one worker had initially climbed down the tank to clean it, but he fell unconscious there.

They said that according to their investigation so far, one of the workers had apparently fallen into the tank and then the others followed him while trying to save him. They added that they are conducting further investigation to confirm how the unfortunate incident occurred.

Police said the were identified as Ramesh, Boora, Ghairdari, Kashan, Naseeb and Shoaib, adding that the incident had occurred in the wee hours but it was brought to their families’ notice after they reached the factory to inquire why they had not returned home all night.

Their families also held a protest and blamed the factory management for the incident. They said that a case should be registered against the factory administration, whose negligence had caused six deaths.

They also said that machines are now available for cleaning chemical tanks because of the presence of poisonous gases, but factory owners use their workers for the purpose to save money. They demanded that the government ensure an efficient labour inspection mechanism to address the problem of poor occupational safety & health conditions in the industrial sector.

SHO Ayaz Khan said that the statements of the factory’s owner and management as well as witnesses are being recorded, adding that a case would be registered if any criminal element is found or if the families of the victims ask the police to register a case. This is not the first such incident to have occurred in Karachi.

Several workers have lost their lives in similar incidents. On December 4, 2015, the owner and seven workers of a pickle factory in Korangi’s Darul Islam Society had suffocated after falling in a chemical tank.

On November 20, 2015, three workers of an oil company in the Bin Qasim area had suffocated while cleaning a tank. On May 15, 2016, five workers had suffocated at a factory in the Korangi Industrial Area.

MAGNITUDE 5.5 NEAR COAST OF NORTHERN PERU