Eruption With Lava Flow At Kilauea Volcano In Hawai’i 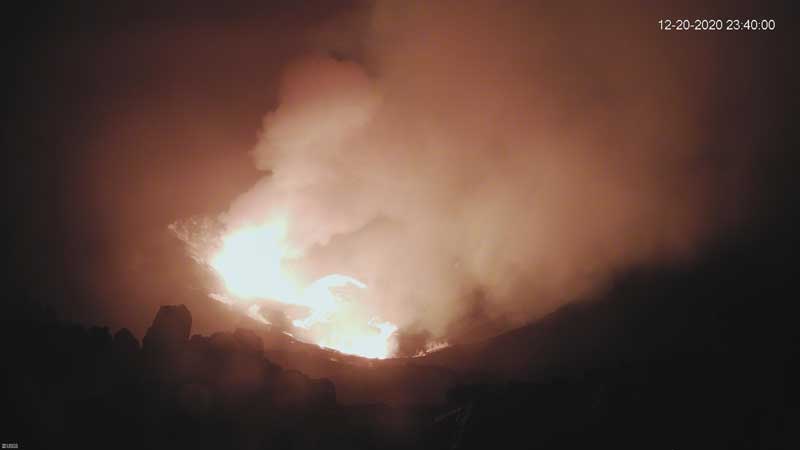 Lava fountains from the bottom of the deep pit crater in Kilauea’s Halema’uma crater, from the west rim of the collapse crater (image: HVO)

A new eruption started at Kilauea volcano in the evening of 20 Dec in Hawaii (local time). The volcano observatory reported:

“Shortly after approximately 9:30 p.m. HST, the USGS Hawaiian Volcano Observatory (HVO) detected glow within Halemaʻumaʻu crater at the summit of Kīlauea Volcano. An eruption has commenced within Kīlauea’s summit caldera. The situation is rapidly evolving and HVO will issue another statement when more information is available.”

During the past weeks, earthquakes had been more frequent under the caldera and the upper rift zone. They likely reflected magma intrusions at shallow level.

Shortly after the new eruption, observed less than two hours ago, a magnitude 4.3 quake struck the southern flank of the volcano, about 10 miles west of Kalapana. This quake might be related as a response to the new eruption, probably causing a small southwards movement of the southern flank of Kilauea, acting as adjustment for the additional space needed of the magma intrusion in the summit area.

River levels in Gloucestershire are rising after heavy rainfall – with more wet weather to come.

The Environment Agency has issued a Flood Warning and Flood Alerts for parts of the Severn and Wye as tidal surges and strong winds combine with rain to cause flooding.

There were reports this afternoon of flooding on the A40 at Highnham, around Two Mile Lane.

This evening, a red Flood Warning was issued for the River Severn at Severn Ham, Tewkesbury.

A Flood Warning has also been issued for the River Wye from Hereford to Ross-on-Wye.

Incident response staff have been deployed along the River Severn in Gloucestershire to check defences as people are urged to avoid using low lying footpaths near watercourses.

On the Severn Estuary, from Gloucester down to Sharpness, the tidal surge with high spring tides and strong winds is expected to overtop sea defences.

Just across the Herefordshire border in Ross-on-Wye, heavy rainfall has seen river levels on Wye rise and flooding of roads and farmland is expected to continue.

The Met Office has put severe weather warnings on parts of the South West and Wales, although none of the warning zones cover Gloucestershire at present.

A second landslip was triggered in Rhonnda Cynon Taf and is being investigated by engineers following heavy rain across the country.

It comes as fourteen flood warnings are in place after poor weather overnight. Over the past 24 hours, Rhondda has experienced prolonged periods of rain, with a Met Office Amber weather warning in force.

The council confirmed there was movement at Wattstown Tip – a privately owned tip and situated on private land.

Both Rhondda Cynon Taf Council and the Coal Authority have been monitoring the site closely. However, in recent months the increased risk has hindered monitoring arrangements, with engineers visiting the site every 2 weeks.

A full evaluation is currently being undertaken.

Council Leader Andrew Morgan visited the site on Saturday morning and says he is in discussions with Welsh Government Ministers as one of the priority sites in Rhondda Cynon Taf. He says a long term plan and funding is needed.

The Welsh Government spokesperson said regular inspections were important and have commissioned work to ”develop options” for the site and provide the necessary support.

Rhondda MP Chris Bryant said “everything that needs to be done will be done”.

Unprecedented weather conditions have caused severe flooding in communities across the area this year.

In February, Storm Dennis cause a dramatic landslip on a former coal tip in Tylorstown following heavy rain. In July, a clear-up was underway to remove more than 60,000 tonnes of spoil from the tip.

At the time of the incident, ITV Cymru Wales spoke to people living nearby who said the incident made them fearful of another Aberfan. In 1966, 150,000 tonnes of coal waste from a colliery spoil tip collapsed into the village of Aberfan, killing 116 children and 28 adults.

Inspections have already begun across Wales as part of an urgent review of all coal tips to see if there is any risk to people or property.

TROPICAL Depression “Vicky” left nine people dead and affected thousands in the Visayas and Mindanao as it slowly moved away from the country.

Mark Timbal, deputy spokesman for the National Disaster Risk Reduction and Management Council (NDRRMC), confirmed on Sunday that three persons died during the storm’s rage in Mahaplag, Leyte as reported by local authorities.

Cane said the local government units of Agusan del Sur have been preparing for natural calamities, especially typhoons and other types of weather disturbances.

But the typhoon’s heavy rainfall reached the red warning, causing rivers to overflow.

Cane identified one of the fatalities as an employee of the Department of Environment and Natural Resources. The victim tried to cross the highway with his wife on a motorcycle, but floodwaters dragged them to their death.

The two other victims crossed rivers separately, with one of them drunk at the time. The two were swept away by the strong waves.

In its situational report, the NDRRMC said it monitored a total of 26 incidents in Caraga Region during Vicky’s onslaught, with 25 incidents of flooding and one landslide recorded.

The NDRRMC said 1,590 families or 6,702 persons across the regions of Davao and Caraga were affected by the weather disturbance.

Damage to infrastructure has reached P105.4 million in Caraga alone. Agricultural damage is still being assessed, the NDRRMC said.

“Our operations are continuous and our local government units have been on-alert even before [the tropical depression] entered. Everyone coordinated through the regional disaster councils in the Visayas and Mindanao,” Timbal said in a separate interview over TeleRadyo.