Heavy rains in Tolitoli Regency in Indonesia’s Central Sulawesi Province caused flooding Friday in the villages of Silondou and Janja, according to the Indonesian National Board for Disaster Management (BNPB).

A total of 350 homes were damaged and a bridge was closed to traffic due to the risk of collapse.

They are currently trying to find out whether other settlements were damaged due to the floods.

The meteorology agency warned that there may be floods due to showers in various regions tomorrow, including Palu, Sigi, Donggala, Parimo, Poso, Buol and Morowali.

Indonesia is located near the equator, and floods and landslides often occur, especially from October to April.

At least four people were killed on Saturday after houses collapsed in a landslide in Xuanhan County in southwest China’s Sichuan Province, according to local authorities.

The landslide was caused by continuous rain. A total of five people were buried and search and rescue operations are still ongoing.

The rescue team said four bodies were recovered and one still missing.

Rescuers in Vietnam recovered the bodies of 11 army personnel and two other people who were buried in a landslide while trying to reach victims of another landslide, state media reported Friday.

The army officers were resting at a forest ranger outpost when part of a hill collapsed and engulfed the building with earth, rock and debris on Tuesday. Only eight people in the team escaped, Vietnam News reported.

They were on their way to a landslide at a hydroelectric plant construction site in Thua Thien-Hue province that left dozens missing. That site is still inaccessible.

Flooding in central Vietnam has killed at least 36 people since last week. Floods are receding but the country is bracing for another rain spell this weekend as a tropical depression heads toward the region.

Elderly residents and small children clung to inflatable tyres as soldiers and police used rope lines to bring them to safety beyond rising floodwater in Cambodia’s western province of Battambang, which is expected to worsen on Sunday.

Hundreds of families in three Cambodian provinces – Pursat, Battambang and Pailin – have been forced to evacuate amid extreme rainfall heralding the arrival of a tropical depression across the Mekong region.

“A two-year-old child and 57-year-old man have drowned in the flood,” Seak Vichet, a spokesman for the Cambodian national committee for disaster management told the AFP news agency late on Saturday.

Authorities do not yet have a clear picture of the extent of the damage or people affected but expect the situation to get worse.

The national highway linking northern Vietnam to the south has been flooded, while airlines cancelled some domestic flights, local media report.

Provincial Governor Vichien Chantaranothai said the Pak Chong district was the hardest hit, with 8,000 households and 12,000 people affected. About 200 homes were inundated.

Authorities were distributing food packages and urged people to evacuate to community shelters.

“The water is three metres deep in some parts,” he told reporters on Saturday.

The Khao Yai National Park was closed this weekend because of heavy rain and landslides.

In Laos, rising floodwaters have damaged villages and rice fields along the Xepon and Xebanghieng rivers in Savannakhet province with more rain on the way.

A landslide in southwestern Guatemala has killed at least four people and injured 10 others, civil protection authorities said late on Tuesday.

The landslide destroyed eight homes in the municipality of San Marcos La Laguna in the country’s Solola region, national disaster agency CONRED said in a statement. The dead were a man, two women and an 8-month-old baby, the agency added.

Rescue operations were continuing at the scene, CONRED said.

Four people were reported missing, with one of them feared dead, as floods and landslides damaged houses and a bridge in Indonesia’s western province of West Java on Saturday (Oct 3) evening, according to disaster agency officials.

Heavy downpours has caused a river to overflow, engulfing houses in the surrounding areas in the Cianjur district, said Kuswara Retana, a senior official of the local disaster management agency.

“A man has drowned at a reservoir and confirmed dead, but his body is still missing. Three others were also reported missing after being swept away by the strong current,” he told Xinhua.

The flooding caused damages to some 10 houses and a bridge, forcing the residents to flee home and take shelters in a mosque and the neighbors’ two-story houses, Retana said.

Foods, clothes and other humanitarian aids were badly needed there, he added.

Seni Wulandari, an official from the provincial search and rescue office, said rescue workers were heading to the scene to search for victims and provide help for the affected people.

Heavy rains have also triggered landslides in three spots in the province, impacting the access to the affected areas and causing difficulties to disaster agency workers, Budi Budiman, head of the emergency unit of the provincial disaster management agency, told Xinhua.

The Indonesian weather agency has warned of intensive rains in the months ahead.

Indonesia’s Meteorology, Climatology and Geophysics Agency (BMKG) on Saturday (Oct 4) warned of extreme weather that can happen due to the rainy season and the La Nina phenomenon.

The agency’s deputy for climatology Herizal said like the rainy season, the La Nina phenomenon in indonesia causes an accumulation of rainfalls up to 40 percent above the normal condition.

“The rainy season as well as the La Nina have potentials to trigger hydro-meteorological disasters such as floods and landslides,” said Herizal.

BMKG predicts that La Nina will continue to develop until the end of 2020.

La Nina begins to drop during the January-February period and will end around the March-April period 2021. 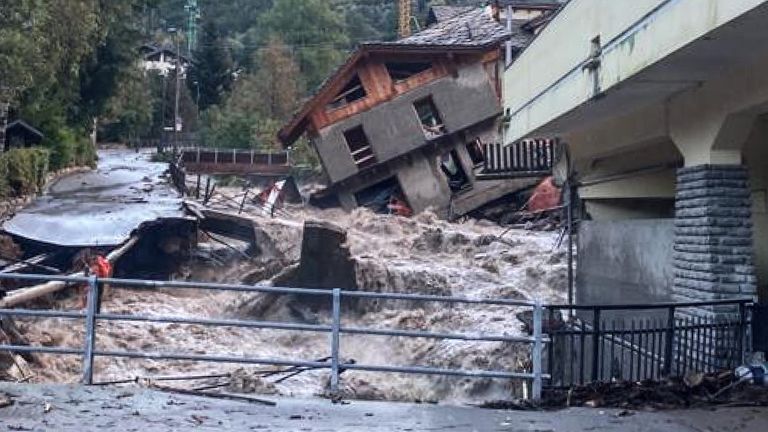 At least 42 people were killed after their houses were swept away Tuesday in a landslide caused by torrential rain in the western Cameroon city, state media reported. According to Reuters, rescue teams spent the night scouring the rubble of destroyed houses in the town of Bafoussam, in the country’s western highlands. Among the bodies recovered were those of 26 children, Cameroon Radio Television (CRTV) reported. The search will resume today for additional bodies believed to remain under the rubble.