Archive | Crack In Earth Alert RSS for this section
July 9, 2019 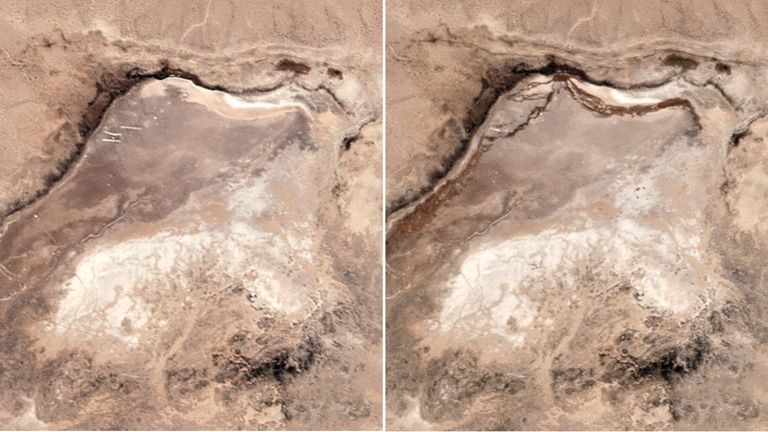 Before and after images show the epicentre of Friday’s quake. Pic: Planet Labs Inc

The impact of Southern California’s strongest earthquake in 20 years has been revealed after satellite images showed how a huge crack emerged in the Earth’s surface.

The US state was rocked by two powerful earthquakes of magnitudes 7.1 and 6.4 last week along with hundreds of aftershocks.

The stronger quake on Friday struck 11 miles from the city of Ridgecrest, with satellite images by Planet Labs Inc showing the large crack that was ripped open in the Mojave Desert.

Move the slider from left to right to see the difference in images of the epicentre before and after the quake.

The US Geological Survey has reportedly said the crack is not a new fault line and the recent quake activity is not related to the dangerous San Andreas fault.

Before last week, the last time an earthquake above a magnitude of 6 struck Southern California was in 1999 when a 7.1 magnitude event – dubbed the Hector Mine quake – was recorded. The 6.4 quake caused a fissure near Ridgecrest in the earth last Thursday

Offices in central LA were shaken for around 30 seconds by the tremors, and the quake was also felt in the Hollywood Hills, Las Vegas and parts of Mexico.

It came after Southern California was struck by a 6.4-magnitude quake on Thursday, which was followed by a strong 5.4-magnitude aftershock in the early hours of the next morning. 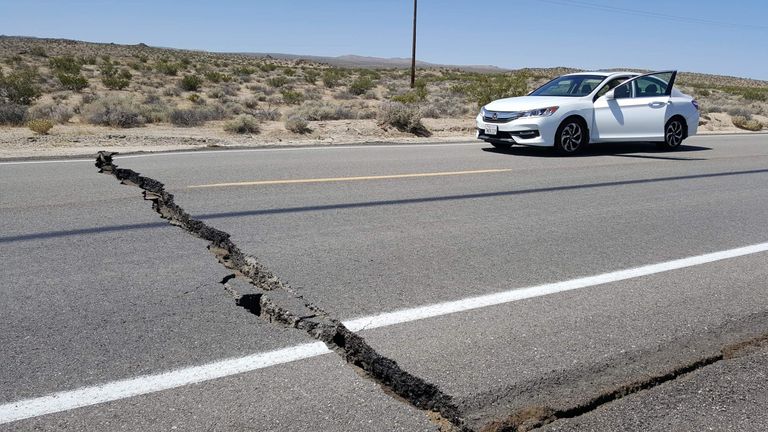 The force of the earthquake cracked a road Pic: Karaleigh Roe

There were minor injuries but no reports of anyone seriously hurt or killed.

Fears of a large quake had grown recently after 1,000 small tremors were reportedly recorded in Southern California over three weeks.

The “swarmageddon” produced earthquakes with an average magnitude of 3 last month, the LA Times reported. There have no reports of any fatalities

California officials are spending more than $40m (£32m) on an earthquake early warning system that – in addition to alerting the public – could also be used to automatically halt trains and open fire station doors moments before a major tremor actually strikes.

Emergency management officials have said they intend to have the statewide warning system in place by mid-2021 to serve California’s roughly 40 million residents.

Huge growing crack swallows up street and houses in Mexico

Africa could be splitting in two:Huge crack in Kenya has sparked fears

Major Concern Over Growing Giant Crack In The Ice Shelf Of Antarctica!