Heavy rains from the tail-end of a frontal system caused flooding and a landslide in Northern Luzon, according to a report on 24 Oras News Alert on Saturday.

In San Mateo, Isabela, 50 families had their houses flooded after the irrigation canal nearby overflowed its banks.

Meanwhile, a rescue van from Cagayan got stranded in mud and was hit by rocks after a landslide occurred in Mt. Province.

Authorities have already conducted clearing operations in the area.

About 40 families on Saturday were evacuated from a barangay in Tuguegarao after the city in Cagayan experienced flooding anew resulting from incessant rains brought by the tail-end of a cold front.

PAGASA said the tail-end of a frontal system will bring rains over the eastern side of Northern Luzon on Saturday.

Residents of upper, middle and lower Cagayan were warned of possible flooding due to the release of water from Magat Dam.

Nim Bahadur BK, a resident of Lankuribot in Dhorpatan Municipality Ward No. 9, Baglung district, woke up to find his house shaking on Wednesday midnight. The 45-year-old woke his wife and three children up and rushed outside just before the floodwaters from Bhuji River swept his house away.

“We spent the night under the open sky in the pouring rain,” said BK.

Fourteen people died while at least 41 others went missing in Wednesday night’s flood and landslide in Dhorpatan Municipality.

“Three individuals have been injured in the disaster and are currently receiving treatment at Burtibang Health Post,” said Inspector Prakash Singh Bhandari of the Area Police Office in Burtibang.

“The bodies of 14 individuals were recovered from the landslide site and by the banks of Bhuji River by late Thursday evening,” said Chief District Officer Suresh Neupane. “The identities of two of the deceased have been established so far.”

According to Yam Bahadur Kayat, principal at Gyanodaya Secondary School in Dhortapan, a landslide triggered by heavy rainfall had occurred at Deurali along the Dhorpatan-Saljhandi road section on Wednesday night.

“The landslide debris led to a dam formation, blocking the flow of Bhuji River. The dam burst and the flooded river entered the settlements,” Kayat said.

The incident site is some 130km west of Baglung district headquarters.

A preliminary report on the incident says the flooded river swept away at least 40 houses downstream in Wards 7, 8 and 9 of Dhorpatan Municipality.

According to Neupane, the flood also swept away large swathes of cultivable land in the municipality.

Security personnel with the help of locals carried out search and rescue works on Thursday.

“The search for the missing individuals is still on,” said Inspector Bhandari.

But conducting rescue operations has been difficult given the incessant rainfall the area has been witnessing for the past few days.

“We were informed about the incident on Wednesday night but could start rescue operations only in the morning when the rain had turned into a slight drizzle,” said Neupane.

However, locals say that there were fewer casualties, as most of the houses along the Bhuji river banks were unoccupied when the disaster struck.

“Most of the villagers had gone to the upper regions with their cattle when the monsoons arrived. The casualties might have been higher if all the villagers had been home on Wednesday night,” said Fulmaya Pun, a local who survived the incident.

Dhorpatan Municipality Mayor Devkumar Nepali said that the municipal office is making arrangements to provide relief to the victims of the disaster.

“We will move the villagers to a safe location and make arrangements for their food and shelter,” Nepali said. “We will also assess the destruction caused by Wednesday’s flood and landslide and will plan on the long-term relocation of the victims to safer areas.”

CAPE Town’s dam levels have declined by 0.6%, according to readings from earlier this month.

This was recorded over the week from May 4-10 and resulted in 54.3% of total dam level capacity.

Water consumption for the period increased to 676 million litres per day.

Consumption was at 662 million litres per day, in the previous week, the City said.

Mayco member for water and waste Xanthea Limberg said although the bulk of the region’s rainfall traditionally falls between May and June, rainfall in 2020 to date was lower than the long-term average between January and April.

Water consumption is well below the long-term average, so low rainfall was not a significant cause for concern, she said.

“The possibility that the drought may not be over does warrant a reminder that we need to remain aware of water restrictions.

“Reacting quickly and effectively to changes in water restrictions is the most important intervention during drought periods,” said Limberg.

She told Weekend Argus that Cape Town pulled off a world record-breaking drought response, in its reduction in water consumption and many of these changes have been permanent.

“Through efforts by residents to reduce water consumption, a range of interventions by the City administration (including intensive pressure management, restructuring of water tariffs and water augmentation projects), we pulled through the worst of it without ever having to turn off taps and implement the Day Zero scenario,” she said.

Residents reduced consumption by almost 60% in world record-breaking time, resulting in the city being formally acknowledged by the International Water Association, said Limberg.

The city was recognised as the global “Water Saving Capital” by the International Water Association in 2018.

There was a decline in water consumption when looking back over the previous 1-2 months.

Water consumption normally goes down in winter and up in summer, so a drop in consumption over April/May is to be expected, added Limberg.

Jo Barnes, an epidemiologist and senior lecturer at the Stellenbosch University’s faculty of health sciences, said water use would vary depending on many factors.

“Weather plays a role (unexpectedly hot weather tends to cause higher water use). It is a lockdown week, so very few industries were in full operation so much less water would have been used.”

There was also 13mm of rain recorded which reduced consumption towards the end of last week.

Jacqueline Goldin, the Unesco chairperson for groundwater at UWC, said climate change has not mobilised the world in a way that the coronavirus has, but it should have.

“We should have a solidarity fund, a climate change command officer, policing and coming together as a globe to reduce our carbon footprint, save water and save our planet,” said Goldin. 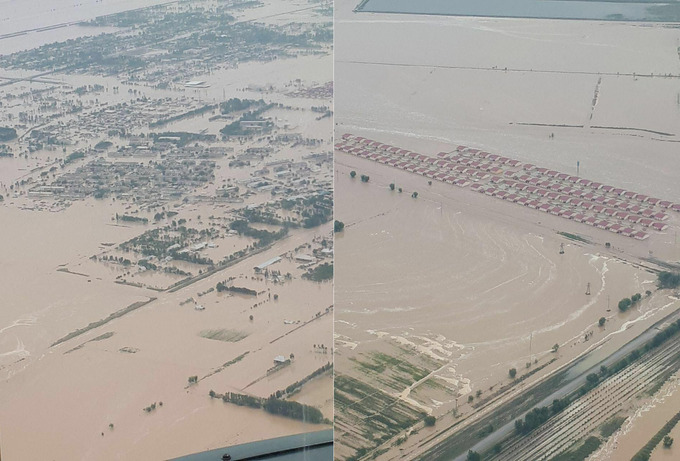 Over 70,000 people have evacuated their homes in border areas of Uzbekistan and Kazakhstan after a reservoir dam failed.

The Syr Darya river, which runs near the border between the two countries, overflowed after the Sardoba Reservoir Dam on the Uzbek side broke in the early hours of 01 May, 2020. The government said the dam failed after heavy rain and strong winds.

About 70,000 people from 22 villages in Syrdarya region, Uzbekistan were evacuated. The government said those displaced were moved to safe districts and provided with shelter and food. Over 50 people were injured and taken to hospital but no fatalities were reported. President of the Republic of Uzbekistan Shavkat Mirziyoyev visited affected areas on 01 May.

On the Kazakhstan side of the border, around 5,400 people were evacuated from villages in Maktaaral district, Turkestan province.

As of 01 May, the Uzbek government said it had managed to reduce the flow of water and divert it to the Abay Canal in Oqoltin district and from there to Arnasay Lake of Jizzakh region.

Just a few days ago a severe storm caused major damage in Bukhara in Uzbekistan, leaving 1 person dead and over 5,000 buildings damaged.

Heavy rain in Togo and Benin during October caused the Mono river to overflow from around 23 October, 2019.

Levels of the Mono river at Athiémé in Benin jumped from 7.8 metres on 19 October 2019 to 8.5 metres on 23 October. Satellite images show around 4,000 hectares of land are under water in areas around either side of the border between the 2 countries.

In Togo areas of Maritime Region, in particular Lacs prefecture, are worst hit. Around 2,000 households (8,000 people) are thought to be affected in the region.

Sixteen villages in Grand-Popo are flooded, affecting 994 households. In Lokossa around 2,500 households in the communities of Lokossa and Ouèdèmè-Adja are affected.

Agence Bénin Presse (ABP), official press agency of the government of Benin, reported that the flooding was exacerbated by dam releases at Nangbéto and Anié in the Plateaux Region of Togo. Several small tributaries of the Mono have also flooded.