At least 17 people, including eight children, have been killed in flash floods and by lightning in Yemen’s northern Marib region, health authorities said.

The violent storms have added to the woes of the war-torn country, which the United Nations has described as the world’s worst humanitarian crisis.

Five years of conflict have left much of the impoverished country in ruins.

“Sixteen people drowned and another person was killed after being struck by lightning,” local health authorities said in a statement on Tuesday.

Recent storms have hit other provinces, including the capital Sanaa, Amran, Hodeidah, Taiz, Saada and Hadramout.

Dozens of homes and hundreds of tents for the displaced have been destroyed, according to the authorities.

No fewer than 11 people, including four from the same family, have been killed by torrential rains in Tanzania’s eastern region of Morogoro, the Police said on Saturday.

The National Weather Service (NWS), defines torrential rain as rain that accumulates at a rate of three-tenths of an inch or more per hour.

Wilbroad Mutafungwa, the Morogoro Regional Police Commander, said the four members of the same family were killed on Friday night after a landslide from nearby mountains pushed down walls of their house.

“The walls fell on the victims, including a five-year-old child,’’ he told a news conference in Morogoro, adding that the grisly incident occurred in Matombo ward.

Mutafungwa said another seven people, including five children, were also killed on Friday night after flash floods from Uluguru Mountains swept them away.

He added that the victims were living on the slopes of the mountains.

He urged the public to be extra vigilant as heavy rains continued to pound in different parts of the region referred to as a breadbasket.

The Disaster management Center said 2,668 people were affected by the heavy rain and floods and one person in Kegalle died of slope cutting failure and the other in Galigamuwa drowned.

The Disaster Management Center says water levels of many rivers in the island have reached to spill level due to heavy rain.

People living in landslide hazard zones in the Divisional Secretariat Divisions of Baddegama, Galle district, Pelmadulla, Ratnapura, Elapatha, Nivithigala, Kalawana and Kiriella in Ratnapura District, Polgahawala and Mawathagama, Kurunegala District, Bulathkohupitiya, Warakapola, Rambukkana, Galigamuwa, Kegalle, Kegalle district and Ambangagakoralaya in the Nuwara Eliya District, where the rainfall exceeded 100 mm in the past 24 hours, have been landslide hazardous warnings requesting to evacuate to safe areas in case of further rain.

The NBRO has warned that landslides, block collapses and rock fall would occur in areas where rainfall exceeded 75 mm during the past twenty four hours.

The Disaster Management Center urged the public living in flood-prone areas to take measures to safeguard the lives and property and evacuate before floods occur, especially because it is necessary to follow the instructions given by the Ministry of Health due to the existing COVID-19 epidemic threat.

The Disaster Management Center also urges the public to take action to ensure that school children’s books and stationery are kept safe from flooding and to constantly alert the public on the hazardous conditions that may occur.

The people living in low lying areas closed to basins of Mee Oya, Deduru Oya, Attanagalu Oya, Kelani, Kalu, Bentara, Gin and Nilwala rivers, Kirama Oya and Uruboku Oya have been advised to be vigilant on the rising water levels.

Meanwhile, power supply in many areas in the Kegalle, Kurunegala, Galle, Matara and Ratnapura districts has been disrupted due to gale force winds. Many power lines and utility posts have been snapped by the wind. About 45,000 persons have been affected due to power failure.

Floods in Rwanda after heavy rainfall from 01 May 2020. Photo: MINEMA

The Ministry of Emergency Situations (MINEMA) in Rwanda reports that heavy rain fell across the country from 01 May causing severe damages. As of 03 May 8 people had died, 5 were injured, more than 100 houses had collapsed and roads were closed.

According to Meteo Rwanda, more heavy rain is expected in Kigali city, Northern Province and Rubavu, Nyabihu, Rutsiro, Ngororero, Muhanga and Ruhango districts over the next 7 days, increasing the risk of further floods and landslides. MINEMA urged people to take necessary precautions. 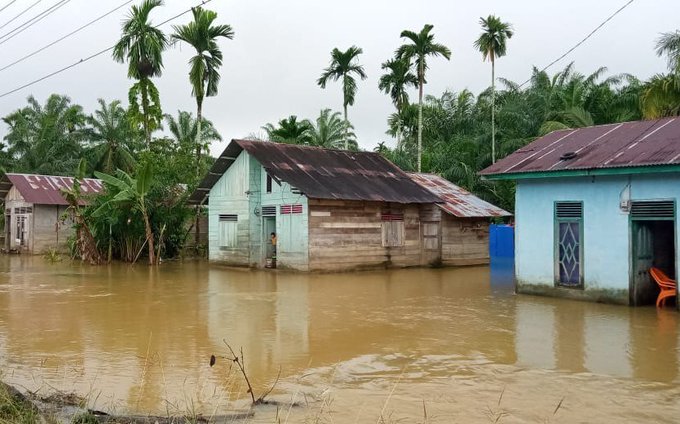 In Aceh Province, flooding struck on 28 April, damaging at least 2,000 homes in 8 villages in Pidie Jaya Regency. Flood water was up to 1.2 metres deep in some areas.

Indonesia’s disaster management agency, Badan Nasional Penanggulangan Bencana (BNPB), said that in the period January to April 2020, there were a total of 437 floods and 267 landslides in the country.