Rashford wrote an open letter to MPs on Monday calling for the Government to reverse the decision not to extend the meal scheme.

Despite an initial rejection by the Department of Education, Rashford persevered and a £120million ‘Covid Summer Food Fund’ was announced on Tuesday.

Rashford also raised £20million for food distribution charity FareShare during lockdown and his actions to ensure underprivileged children do not go hungry have been lauded by Twitter users – with the exception of Katie Hopkins.

The former Sun columnist wrote : “Dear Marcus Rashford, do you think women should think about how they are going to feed a child before they decide to have it?

“I do not want to pay to feed other people’s kids. You are welcome to. Thank you, Katie Hopkins.”

Van Aanholt was less than impressed with Hopkins’ reaction to Rashford’s work and responded with a tweet of his own.

“He’s done more for this country in 24hours than you have your entire life, bow before a king,” the Palace left-back wrote.

This was not the first time van Aanholt has clashed with Hopkins on Twitter. The pair exchanged heated remarks earlier this month over the Black Lives Matter movement.

In the wake of social media users going quiet on #BlackOutTuesday, Hopkins tweeted: “Today is #whiteoutwednesday I will shortly be posting a picture of my a***. Thank you.”

Van Aanholt responded by writing: “I don’t know who she is but WOW…2020 needs to cancel you,” before Hopkins introduced herself to the Eagles fan favourite.

She wrote: “Dear Patrick van Aanholt, my name is Katie Hopkins. I am a white Christian Conservative. You May kneel and kiss my ring.”

Van Aanholt then made known who he was, saying: “Dear Katie Hopkins, my name is Patrick van Aanholt, I am Dutch Black, I’m also Christian (not that colour or Religion has anything to do with it).

“As for your ring you are welcome to come to Selhurst and kiss my big toe…I’ll wait.”

The 29-year-old then added, “Twitter I’m going bed but I can promise you I’ll make time for this Katie Hopkins” – which he did on Tuesday in light of Rashford’s campaign.

150,000 Affected by Heavy Rain and Floods Since Mid-April in Yemen #Flooding #Yemen

UN Office for the Coordination of Humanitarian Affairs (OCHA) reports that almost 150,000 people have been affected by flooding and heavy rain in Yemen since mid-April.

Flooding has damaged roads, bridges and the electricity grid, and contaminated water supplies, cutting access to basic services for thousands of people. In Aden, power cuts have continued since the floods of 21 April.

Conditions are hardest for thousands of families already displaced who have lost shelter, food rations and household supplies. An estimated 4,764 households have been affected in Internally displaced people (IDPs) sites in southern governorates, including 1,812 families in Aden, 1,037 in Abyan, 917 in Taizz and 770 in Lahj governorates.

OCHA said there is heightened risk of diseases such as malaria and cholera. Already, more than 110,000 cases of suspected cholera have been recorded across 290 of Yemen’s 333 districts since January this year, with growing fears that the number of cases will spiral.

More heavy rains and thunderstorms are expected in the east and parts of the western coast, as well as in desert areas in Marib, Al Jawf, and Shabwah governorates.

Situation Dire After Weeks of #Flooding in #Congo #Brazzaville

The UN says thousands of people are forced to sleep outside and are without clean drinking water after ongoing floods damaged homes and water points in the Republic of Congo (Congo Brazzaville).

According to a recent report from the UN Office for the Coordination of Humanitarian Affairs (UN OCHA), flooding that began in OCtober this year has now affected 8 of the 12 departments in the Republic of Congo (Congo Brazzaville).

At least 170,000 people have now been affected by floods in Likouala, Cuvette and Plateaux departments alone. The government declared a state of natural disaster and humanitarian emergency in the 3 departments on 19 November 2019.

Flooding was caused by the overflow of the Oubangui and Congo rivers. Hundreds of villages along the river have been affected, many of which are completely submerged. Flooding has damaged infrastructure and impeded access to food, water, education and health care. Homes, schools and health centres in affected areas are flooded and only accessible by boat.

UN OCHA said “most water points and sanitation facilities are no longer functioning. Affected communities do not have access to safe drinking water, and hygiene and sanitation products are scarce, exacerbating the risks of contamination and epidemics caused by water and mosquitoes (typhoid, cholera, malaria).

“Significant crop and livestock losses have also been reported. Half of the crop areas are flooded, and unharvested production destroyed, including cassava fields, a staple food. The next harvest will not take place until the last quarter of 2020. Losses are also significant in the breeding and fishing sectors. Food reserves are already quickly running out.”

The UN recently reported that flooding in neighbouring Democratic Republic of Congo has affected around 600,000 people. Along Congo Brazzaville’s northern border, parts of Central African Republic have also been affected during the same period. 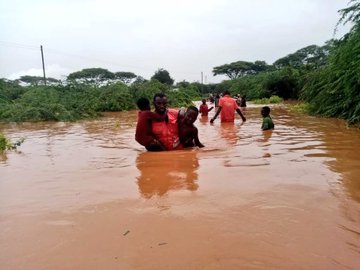 The government of West Pokot County said that, as of 24 November, 54 people have been confirmed dead and 46 people are still missing. Sixteen survivors have been admitted to Kapenguria County Referral Hospital.

County officials said the catastrophic landslides hit Tapach, Weiwei and Batei Wards of West Pokot. Houses were damaged or destroyed by the gushing rivers of sludge, boulders and uprooted trees. Authorities said that more than 10,500 people have been displaced and there is an urgent need for humanitarian assistance.

The county government said that a multi-agency team comprising Kenya Defence Forces, Kenya Police, Kenya Red Cross and County Disaster Management Unit are on the ground. A medical team is also expected from Moi Teaching and Referral Hospital. Psychosocial support desk has been set up at Kapenguria County Referral Hospital.

Roads have been cut and bridges wiped out, severely hindering rescue and relief operations.

Heavy rain has also caused flooding and landslides in other areas of the country, including Taita Taveta, Tana River, Meru and Uasin Gishu counties.

Kenya Red Cross said that “Rains continue to pound Taita Taveta with heavy downpour experienced at the highlands of Wundanyi, Rongé and Vuria. Landslides have been reported at Mbengonyi, Mndangenyi, Msau and Mbale.”

In Tana River County, Kenya Red Cross reported that over 1,000 households have been displaced in Ziwani and other locations after the Tana River burst its banks.

According to Red Cross reports, a number of houses have been reportedly swept away after river Thanantu broke its banks in Mikinduri in Meru County. Families have been displaced in Turbo, Uasin Gishu County, after the Turbo River broke its banks.