“Unprecedented” situation; no storm like it in decades in Greece

The snow storm “Medea,” which left Athens covered in snow Tuesday, passed through the city on Wednesday and is making its way toward Crete.

The winter storm has left over 40,000 homes in Attica, especially in Athens’ suburbs, without electricity for a second day.

Unable to fight the frigid temperatures by turning on their heaters, many people across the region, mainly in the northern suburbs of Athens, have faced a chilly blackout lasting for days.

Nikos Hardalias, Deputy Minister for Civil Protection, stated that the blackouts across Attica are expected to last until Wednesday evening as crews work tirelessly to restore power during the day.

Hardalias noted that HEDNO has led a massive effort to fix damaged power grids and restore electricity as quickly as possible, but faces extraordinary difficulties, since the storm impacted all of Greece:

“I want to make it clear that there has been an enormous effort made by HEDNO’s crews,” he stated.

“This is the first time that we have had a weather phenomenon impact all of Greece, as the snow storm did not just affect Attica.”

Anastasios Manos, CEO of HEDNO, highlighted that such a severe snow storm has not been seen in Attica for many years: “HEDNO found itself facing an unprecedented situation, one that has not recurred for decades.”

HEDNO has sent out over 600 teams of 1,500 workers to restore power to Greeks who have been left in the darkness.

In the northern suburbs of Athens alone, there are 400 crew members working on a 24-hour-basis to fix the area’s power grids.

Due to the severity of the situation, Greece’s military has also provided aid in removing downed trees that are blocking major roads and fixing damaged power grids.

A snow storm engulfed Lebanon on Wednesday along with heavy winds and torrential rainfalls, the National News Agency reported.

Temperatures on the coast reached 7 degrees Celsius compared to previous years when the average temperature did not drop below 11 degrees.

Abdel Rahman al-Zawawi, head of the weather department at Rafic Hariri International Airport, was quoted by Elnashra news website as saying that this is the coldest storm to hit Lebanon this year.

He also indicated that Thursday will be the coldest day of the year so far in Lebanon, with snow expected to fall at altitudes of less than 600 meters in some areas.

Also, the report said snow fell for the first time in years in some villages in Marjeyoun, southern Lebanon.

Civil Defense teams intervened in several areas of the country including Faqra and Kfardebian in Mount Lebanon to remove the snow and allow smooth transportation of citizens in the area. 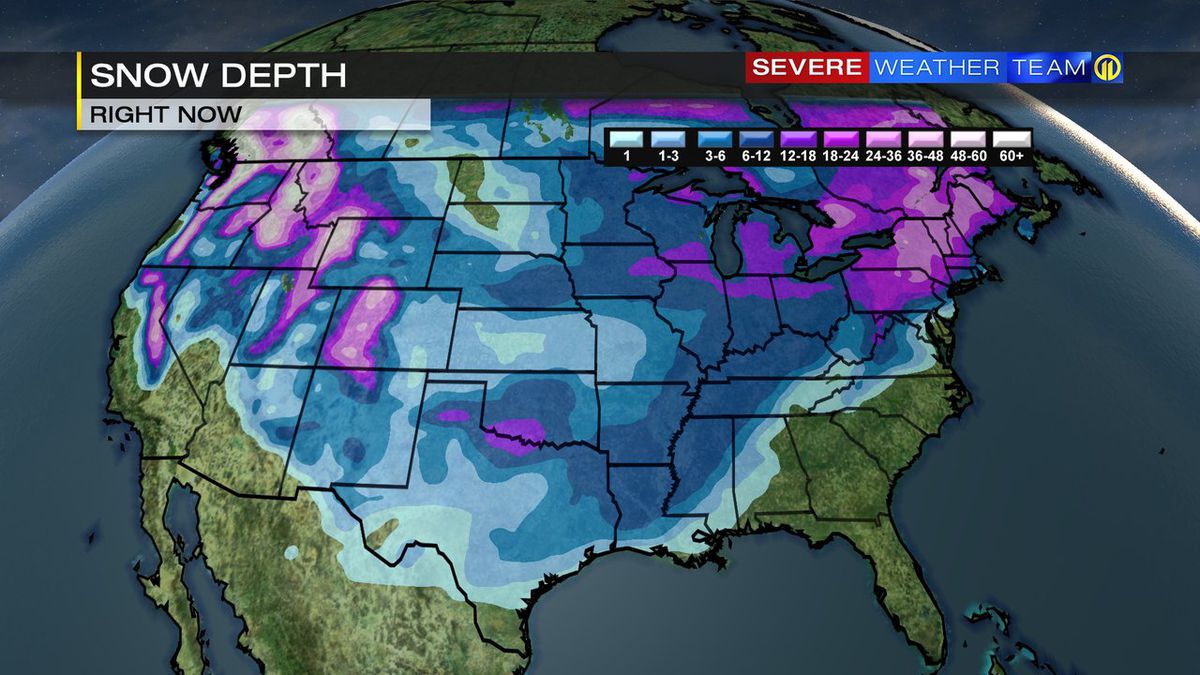 Nearly three-quarters of the U.S. is snow-covered, and there’s still more than a month to go before spring. Data from the National Weather Service shows only three states are without snow: Florida, Georgia and South Carolina.

Several states that don’t usually see much snow are nearly covered. Southern states, like Texas and Oklahoma, have been especially hit hard this winter, with record-breaking cold, snow, ice and widespread power outages.

Heavy snowfalls have buried Moscow in massive snow piles, disrupting transport, delaying flights and making it tough to get around for pedestrians braving strong winds and temperatures of minus 15 Celsius (5 Fahrenheit).

The snowfall started late on Thursday and was expected to end on Sunday. Russia’s emergency service advised people to stay away from trees, warning of winds gusts of 18 metres per second (40 mph). “It’s a real snowstorm, a snow Armageddon, a snow apocalypse. This is not a practice alert, but a combat alert,” Evgeny Tishkovets from the weather service Fobos was quoted by RIA news agency as saying before the snowfall began.

By early Saturday, snow depth in the city reached 56 centimetres (22 inches), Fobos said. This was close to exceeding a record high of 60 cm for accumulated snow on a Feb. 13, it said.

There have been multiple flight delays at the airports in Moscow, a city of more than 12 million people. Unusually for a weekend, traffic was jammed in many places.

Around 60,000 people were working to clear the streets, the Moscow mayor’s office said.

Sub-zero temperatures saw water turn to ice along a section of the Thames in Teddington, in the south west of England’s capital city.

An image taken by the Royal National Lifeboat Institution (RNLI) in Teddington showed seagulls chilling on the frozen surface of the river.

In a tweet, the RNLI said they might’ve needed to use a smaller lifeboat as an ‘icebraker’ to get out onto the water because it’s “not often the Thames freezes over in Teddington”.

A spokesperson said “It’s quite spectacular. I’ve lived here for 13-years and I’ve not seen this part of the river freeze like this.”

The Thames has completely frozen over in the past, the last time being in January 1963 – the coldest winter for more than 200 years that brought blizzards, snow drifts and temperatures of -20C.

Extremely cold weather this week saw temperatures in London drop to -2C, meanwhile the UK experienced the coldest February night for 25 years – with temperatures of -23C recorded at Braemar weather station in Scotland.

Between 1309 and 1814, the Thames froze at least 23 times and on five occasions the ice was strong enough to hold a fair on the river.

The ice was several feet thick and could support shops, pubs, fairground rides, thousands of people – and even elephants could walk across it!

The first ‘frost fair’ as they were known was recorded in 1608 when the river iced up for six weeks. The last fair took place over 200 years later in 1814.

The frost fairs took place during a period of time known as the Little Ice Age, roughly between 1350-1850 which saw an increase in cold winters in parts of Europe.

Courtesy Of The UK Met Office

Huge amounts of snow have fallen in parts of the Alps. Some people have been caught in avalanches, villages were cut off and more snow is on the way. There have been some large spontaneous avalanches. There are some excellent skiing conditions, but it’s highly dangerous off piste.

The fiercest storms started in the north and western Alps, in Switzerland and France.

Up to 2m has fallen at altitude in a few places.

There are some spontaneous avalanches happening.

Further east, Austria has also seen some heavy snow in the Tirol and Salzburg.

The new snow has been falling on the snowpack that has an extremely weak, and widespread, layer near the base of the snow.

The fresh snow is putting extra pressure on this already very weak snowpack.

The temperatures have been warm in the Alps and heavy rain has also fallen with flooding worries.

Four people were killed in avalanches in the Tirol in Austria over the weekend.

Extreme caution is urged across many parts of the Alps.

It is one of the most dangerous periods in recent years across the Alps.

There have been 45 deaths so far this winter and that comes as many resorts are closed.

After easing on Sunday more snow is on the way, though not in such large amounts.

30cm is forecast and the avalanche danger is at Level 4.

People in Val d’Isere are being asked to clear the snow from the roof of buildings as it could slide off and bury passing pedestrians.

And Val Thorens has been monitoring the snow levels over the past few days.

It was quite a storm last week with Level 5 avalanche danger in parts of France and Switzerland, plus Level 4 in some places in Austria.

Up to 2m fell in a few spots with many others having well over a metre.

Ski resorts remain open across Switzerland with some lift closures due to the snow levels.

In Switzerland for Monday there remains a ‘considerable’ risk of avalanche with Level 3 in many places and ‘high’ at Level 4 in some areas in the east of the country.

“The large amounts of fresh fallen snow and freshly generated snowdrifts from this last week are continuing to consolidate,” said the Swiss Institute for Snow and Avalanche Studies.

“Beneath the thick layers of fresh snow, particularly in the Valais and in Grisons, there are strikingly weak layers.

“Avalanches can be triggered in these layers by persons, as various large-spread avalanche releases of the last few days have amply demonstrated.”

There is now excellent levels of snow across many parts of the Alps with conditions above average for the time of year.

For an analysis we turn to Fraser Wilkin from weathertoski.co.uk

“Following last week’s wild weather, snow depths are now way above average across the north-western Alps (e.g. Tignes, Val Thorens, Chamonix, Verbier, Zermatt, Mürren, Engelberg, Laax), especially at altitude where three-day storm totals (between Wednesday and Saturday) were between 1m and 1.5m above 2200m, with even more in places.

“Indeed, all parts of the Alps currently have excellent snow cover, though we do appreciate that publicly accessible lift-served skiing is still only possible in Austria and Switzerland.

“If skiing in the Alps does become more accessible to greater numbers of people later on this season, even if that means skiing in the Alps beyond the “normal” season (i.e. later in spring or in summer) then there is plenty to be optimistic about, from a snow perspective at least.”

A powerful stormed moved its way through Southern California and blanketed mountains with snow on Friday.

Big Bear got more than a foot of snow. The snow dumped within 24 hours is in addition to the two feet that fell on Monday.

It’s great news for skiers and snowboarders, and for local businesses. The economy there has been hit hard by the pandemic.

At Snow Valley Mountain Resort in Running Springs, about 18 to 24 inches of snow fell within 24 hours and the area was still seeing fresh snow Friday morning.

The mid-winter storm meant better conditions at Mountain High Resort in Wrightwood, allowing them to open their east side resort for the first time this season. About 18 to 24 inches of snow was reported at Mountain High on Friday.

In Oak Glen, one of the burn areas, snow levels were dropping, which left minimal flooding. Flash floods were a concern in several burn areas in San Bernardino and Riverside counties.

Those planning a trip to the mountains will need chains on their vehicle.