Coronavirus: MSC Meraviglia cruise ship turned away from Jamaica, Cayman Islands and Mexico due to a member of the crew being sick after visiting Milan Italy #COVID19 #coronavirus #Milan #Italy #MSCMeraviglia #CruiseShip

Coronavirus: MSC Meraviglia cruise ship turned away from Jamaica, Cayman Islands and Mexico due to a member of the crew being sick after visiting Milan Italy

Four of the British and Irish evacuees who landed back in Britain from Japan yesterday have tested positive for COVID-19, taking the UK total to 13.

The virus was transmitted when they were on the Diamond Princess cruise ship.

They were due to be quarantined for two weeks, having already spent 14 days in isolation on the ship. Almost a fifth of the 3,711 passengers originally on board the liner have been infected.

A “full infectious disease risk assessment” was carried out before the repatriation flight, and no one that boarded had displayed any symptoms, the Department of Health said.

“Appropriate arrangements” are in place at Arrowe Park, it added, including strict separation of passengers from staff and from each other.

Thirty Britons and two Irish citizens landed at Boscombe Down Ministry of Defence base near Salisbury, Wiltshire, before being taken to hospital by coach on Saturday.

Meanwhile, there has been a third fatality from the COVID-19 outbreak on the Diamond Princess.

Japan’s health ministry said a passenger who was taken to hospital after testing positive had died.

The Japanese man in his eighties was among the first group of people to develop symptoms when a 14-day quarantine was ordered on the ship on 5 February, health ministry official Masami Sakoi said.

A total of four people have died from the virus in Japan – all of them in their 80s.

In Italy, about a dozen towns are in lockdown as the country races to contain the biggest outbreak of coronavirus in Europe following a surge in cases.

The number has risen sharply to more than 130, and two people have died in the last 48 hours.

In another development, more than 100 people flown back to the UK from the epicentre of the coronavirus outbreak in China have been released from quarantine.

The group – including 10 children and a family of four – spent two weeks at a conference centre in Milton Keynes after being brought back to Britain on a repatriation flight from the city of Wuhan.

Dozens of people who spent two weeks isolated on a coronavirus-stricken cruise ship in Japan have returned to the UK.

Thirty-two British and European nationals took off from Haneda airport in Tokyo late on Friday and landed in Boscombe Down Ministry of Defence base near Salisbury, Wiltshire, on Saturday morning.

The flight also has British government and medical staff on board, the Foreign Office said.

On landing, the Britons in the group were due to be taken to Arrowe Park Hospital on the Wirral for two weeks of quarantine.

It is unclear where the small number of EU citizens will be taken.

Foreign secretary Dominic Raab released a statement saying: “We have brought 32 British and European citizens safely home from Japan. The FCO worked hard to get them back to the UK securely.

“Our number one priority has consistently been the health and safety of UK nationals.”

It comes as Italy is reporting its second death from coronavirus, amid fears the viral outbreak could have having an impact on the worldwide economy.

Among the Britons who have spent two weeks in isolation on the Diamond Princess are Alan and Vanessa Sandford, who were kept in their room after hundreds of cases of COVID-19 were confirmed on board.

Some 634 passengers and crew caught the SARS-like illness aboard the ship, which makes up more than half the confirmed cases outside of China.

Only the people who were not exhibiting symptoms were allowed to board the repatriation flight.

Mr Sandford said he understood why people might be “nervous” about those who have jetted back to the UK, but said he and his wife could not wait to be back home.

He told Sky News: “I think I might struggle a bit with this second lot of 14 days (on the Wirral).

“You can’t get on with your life, everything’s on hold, and I’ve got this certificate that says I’m negative for the virus and nobody on the aircraft is going to be anything other than negative, so it just seems excessive.

“But I understand as well that people are nervous about having people back in the country.”

Another passenger, Alan Steele, who was separated from his new wife after being diagnosed with COVID-19, made a joke comparison between his awaited quarantine on the Wirral and Butlins.

Writing on Facebook, he said: “Wendy’s test was negative so Butlins the Wirral here we come for 14 days.”

One Briton who has already spent two weeks on the Wirral after being evacuated from Wuhan, the epicentre of the outbreak in China, said the time should go quickly.

“It is going to be boring at times, but if you can interact with others a bit and use the entertainment systems the time should pass pretty quickly,” Kharn Lambert told Sky News.

A British couple who have been quarantined on a cruise ship in Japan have revealed they have been diagnosed with COVID-19.

David and Sally Abel have been posting regular updates online from the Diamond Princess, which has been docked off the coast of Yokohama since 3 February.

In a Facebook post on Tuesday, Mr Abel said: “There is going to be a time of quiet. We have been proved positive and leaving for hospital soon. Blessings all.”

However Mr Abel, from Oxfordshire, later said he doubted the diagnosis because he and his wife were being taken to a hostel instead of a hospital.

He wrote on Facebook: “Frankly I think this is a setup! We are NOT being taken to a hospital but a hostel. That’s where partners are sent waiting out their quarantine.

“No phone, no wi-fi and no medical facilities. I really am smelling a very big rat here! Waiting for the transfer now..”

When asked if he was sure the test for COVID-19 was positive, Mr Abel replied: “I doubt it was positive. If it was, we would be in hospital.”

He told Sky News’ Kay Burley @ Breakfast show: “This is a really, really serious outbreak – a serious case which people, through no fault of their own, have been exposed to this potentially lethal virus.

“What we’re trying to do as a government is try and get people back to Britain, fly them back so that they can be with their families.”

On Mr and Mrs Abel, Mr Kwarteng added: “It will be terrifying and very frightening but I think where they are is [with] the Japanese authorities. My understanding [is they] have essentially quarantined them and are looking after them.”

The Foreign Office says it is “working to organise a flight” back to the UK for British nationals on the coronavirus-hit cruise ship – and those trapped are being “strongly encouraged” to take it.

Those in quarantine on the Diamond Princess are being contacted to make the necessary arrangements, with a spokesperson adding: “We urge all those who have not yet responded to get in touch immediately.”

More than 70 British nationals have faced an anxious wait to find out whether they will be evacuated from the cruise liner.

The Foreign Office had come under increasing pressure to bring them home after the US chartered two planes to repatriate 340 of its citizens – 14 of whom had been diagnosed with COVID-19, the disease caused by the coronavirus.

Those who had tested positive were moved to the back of the plane in a “specialised containment area” to be isolated – even though they did not display any symptoms.

Approximately half of all known cases of COVID-19 outside China have been found aboard the Diamond Princess.

About 450 people have tested positive since the cruise liner was ordered to stay under quarantine on 3 February.

Four Britons are among the confirmed cases, and they are currently in hospital in Japan.

Japanese health officials, along with Princess Cruises, have announced an additional 44 positive cases of the COVID-19 — previously known as the novel coronavirus — among passengers aboard the quarantined Diamond Princess cruise ship docked in Yokohama.

The number of infected passengers totaled 218 as of Wednesday.

“Princess Cruises has been informed that over the next several days, Japanese health officials are planning a voluntary disembarkation of guests to complete their quarantine period at a shoreside facility,” the cruise line wrote in an update on its website. “From the information available it is our understanding that this will be a phased approach, with the most medically vulnerable guests in the first phase, including older adults with pre-existing health conditions.”

Once screened, guests who test positive will be transported to local hospitals. Those who test negative will be given the option of relocating to a shoreside facility, with individual rooms and bathrooms, for the final stages of quarantine. Guests are “also welcome to stay” on the Diamond Princess, if they so choose.

Princess Cruise’s latest announcement comes only a day after the Japanese Ministry of Health confirmed 39 new cases of COVID-19 among passengers on Feb 11, and three days after 66 other passengers were confirmed to have tested positive for the virus on Feb 9.

The Diamond Princess had been quarantined since Feb 3., after returning early from a 14-day cruise which stopped in Hong Kong and several other Asian ports. Concerns were initially raised after an 80-year-old passenger who disembarked in Hong Kong on Jan. 25 tested positive for COVID-19.

The novel coronavirus, which was officially named COVID-19 by the World Health Organization, has so far claimed the lives of over 1,300 and infected over 60,000. 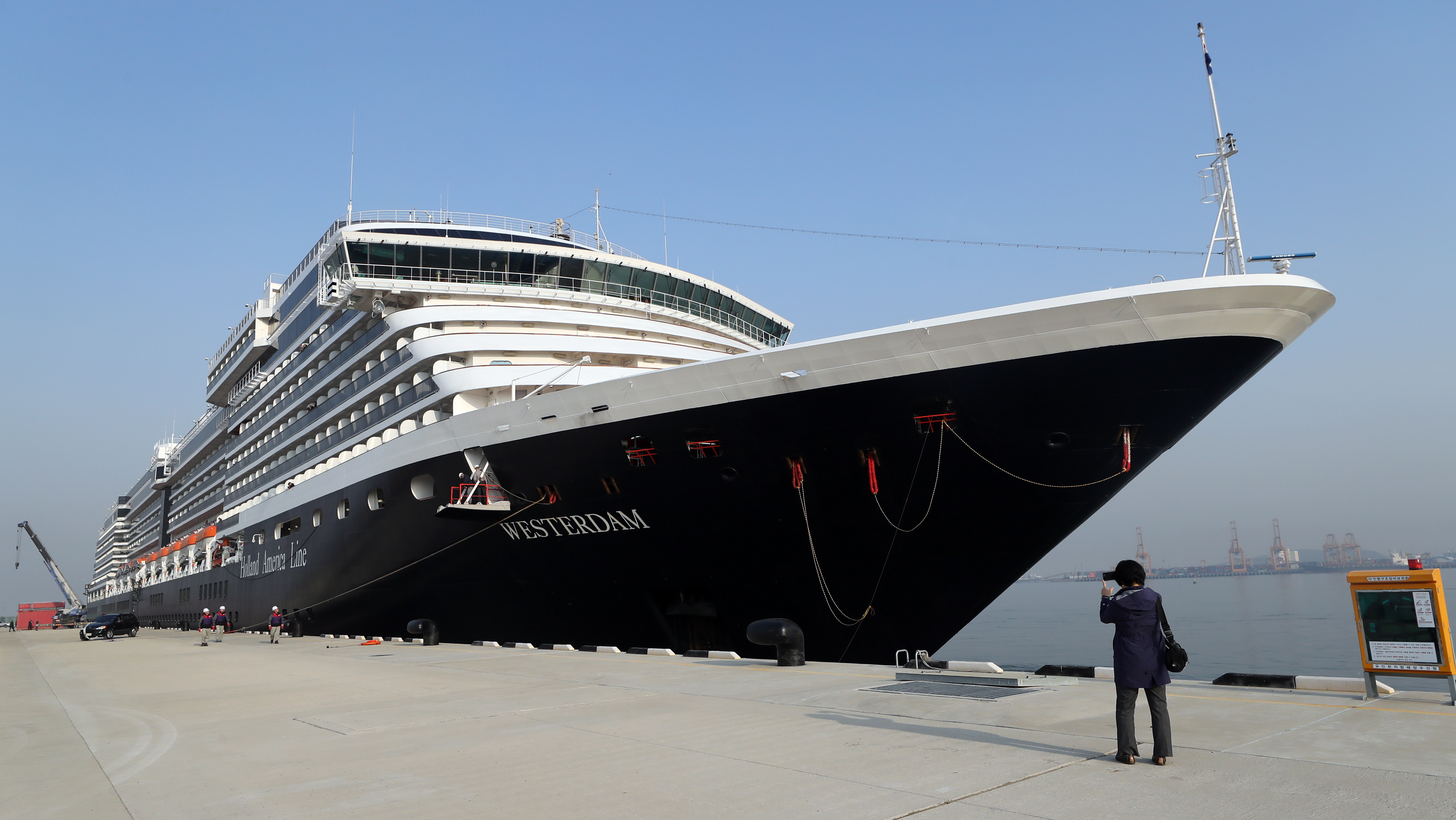 A luxury cruise ship has been turned away from several ports amid coronavirus fears.

The liner carrying more than 1,450 passengers has been told it cannot dock in Thailand.

The Westerdam had already been turned away from several ports, including in Japan, Taiwan, Guam and the Philippines, amid fears of the virus.

Holland America, which owns the ship, said it had “no reason to believe” anyone on board has the virus.

It had planned to dock in Bangkok on Thursday.

But on Tuesday the Thai government said permission had been “refused”.

It added that, while the ship would not be allowed to disembark, Thailand would “gladly help providing fuel, medicine, and food” to the vessel.

Three more passengers stranded aboard a quarantined cruise ship off the coast of Japan have tested positive for coronavirus, the country’s Health Ministry said on Saturday, bringing the total number of confirmed cases on the vessel to 64.

While the quarantine period for the ship was initially set for two weeks, a health official has clarified that it would be extended each time a new case was confirmed on the vessel, currently stuck at the port of Yokohama with around 3,700 people on board.

Some 279 passengers – either showing signs of illness or coming into close contact with those who do – have undergone tests for the virus. To date, each infected passenger has been transferred from the ship to medical facilities around Japan.

With its epicenter in the Chinese city of Wuhan, the fast-moving outbreak has killed over 700 people and infected more than 34,000 since it was first observed in December, the majority of them in China.