The UK’s terror threat level has been raised from “substantial” to “severe”, meaning an attack is now judged to be “highly likely”.

The move follows Monday night’s attack in the Austrian capital Vienna, in which four people were killed.

Home Secretary Priti Patel described the action as a “precautionary measure following the terrible incidents we’ve seen in France last week and the events we saw in Austria last night”.

“The British public should be alert but not alarmed,” Ms Patel said, as she confirmed there would now be “more visible policing across the country”.

She added: “That is right in light of the threat going up, but as I’ve said, the public should not be alarmed – this is a precautionary measure.”

The home secretary urged the public to report anything of concern to police.

The decision to raise the UK’s threat level has been taken by the Joint Terrorism Analysis Centre (JTAC).

JTAC is based at MI5’s headquarters in London and is made up of counter-terror experts from the police, government and security agencies.

A UK security source told Sky News’ defence and security correspondent Alistair Bunkall that there was no specific threat to the UK but recent attacks in Europe had felt “different in tactic and tempo”, with the raised threat level a response to that.

The source added the UK has been operating at the top of “substantial” for some time and it wasn’t going to take much to nudge the UK into the “severe” category, with Vienna being that nudge.

Labour’s shadow home secretary Nick Thomas-Symonds said: “This decision should not cause undue alarm but shows the importance of people continuing to be vigilant.

“Any suspicious activity should be reported to the police or the anti-terrorism hotline.”

The terror threat level had been at “substantial” since November last year, when it was lowered from “severe” for the first time in five years.

The “severe” level is the second-highest level, with only “critical” above it – which was reached in May 2017 after the Manchester Arena bombing.

He added on Twitter: “The UK’s thoughts are with the people of Austria – we stand united with you against terror.”

The five terror threat levels are:

This decision is a sobering indication of just how concerned intelligence officials are about the possibility a wave of terror attacks across Europe could spread to Britain.

It had previously been reduced to ‘substantial’ in November 2019.

This came after intelligence analysts assessed the threat to the UK from international terrorism was still significant, but had reduced enough to suggest planned attacks were no longer highly likely.

The motivation for the latest attack is still not entirely clear, but the gunman, who was shot dead by police, has sworn allegiance to the Islamic State terror group.

The group has already called for attacks against French interests because of the French government’s robust defence of the right to publish caricatures of the prophet Muhammad.

The stance has angered many in the Muslim world, who see such depictions of their most revered prophet as grossly offensive.

Multiple injured after #knifeAttack on shopping street in The #Hague, #Netherlands

SEVERAL people have been wounded following a knife attack in The Hague tonight, according to reports.

Police reported that emergency were on the scene but it is unsure if there have been any more casualties.

The attack took place on a busy shopping street in the Dutch capital which was even more busy than usual due to Black Friday.

Dutch police are said to be hunting a man aged between 45 and 50-years-old.

Reports have suggested that the attack took place at a Hudson’s BAY STORE. 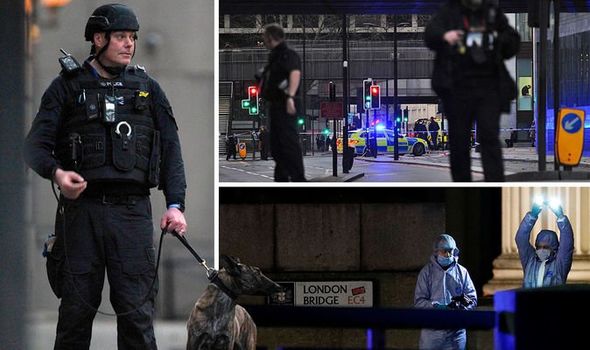 ARMED police shot dead a terrorist on London Bridge after five people was injured in a horror stabbing frenzy in the capital. The knifeman was also wearing a hoax suicide vest, police have revealed, adding that at least two members of the public have died as a result of their injuries.

Panic spread through London Bridge at around 2pm this afternoon when the knifeman struck at innocent members of the public. he force said in a statement: “I can confirm at 2pm today police were called to a stabbing at a premises near to London Bridge. Emergency officers attended. A male suspect was shot by specialist armed officers from the City of London Police and I can confirm the suspect died at the scene.” The force saaid he was wearing a fake bomb vest.

The London Metropolitan Police said: “We are currently dealing with an incident at London Bridge.

“Please stand by for updates.”

Sniffer dogs are also at the scene.

Initial reports state a man had been shot, but officers now state a suspect has been detained. Another person has been killed.

Another social media user said there was a “Huge amount of police”.

A police helicopter is also circling the area in the sky and police boats were also in use.

The bridge has been evacuated while the police investigate.

Witness Cecilia Sodero was on the top deck of a bus going over London Bridge when she heard shots and saw a man lying on the ground with a “very scary device, like a bomb device”.

“I was like okay, this is unusual, so me and the other passengers started looking outside, to see what’s going on, and we saw like six people holding someone on the floor,” she told Sky News.

“At some point someone says ‘oh, he has a knife’, and we were like, oh my gosh, this guy is supposed to stab someone and people was running away.

“The police officers finally they removed the knife. But then what happened is when they shot the guy, the guy is still alive, and they shoot and he’s trying to pull the black jacket off so I was able to see the vest that he was wearing. And it seems like a very scary device, like a bomb device, at that point we just ran away from the bus, crossing the bridge in the other direction. The whole thing was very scary to be honest.”

Some witnesses have claimed a man has been shot, while Sky News reported one person has died. However, it is not known if this was the knifeman or an innocent member of the public.

This is yet to be confirmed by Scotland Yard.

Video footage from the scene shows armed police officers running towards London Bridge and shouting at people to “get inside”.

More dramatic video footage also shows a man laying on the ground with armed police standing over him.

Footage from the scene showf a white HGV lorry across the central reservation heading into incoming traffic.

Police cars were seen blocking off the southbound carriageway while traffic was gridlocked heading north, away from London Bridge station and into the City.

Armed police officers were seen moving along the footpath, which has terror bollards in place, towards London Bridge. One video shows what appears to be police pulling equipment out of a vehicle nearby.

Those in the video can be heard saying: “They’ve actually got guns out. They’ve got the guns out.”

The attack comes nearly two and a half years since the capital was rocked by a terror attack which left 11 people dead – including all three terrorists.

“Just a few minutes ago I was walking across London Bridge on the south bank to the north bank of the bridge,” he said.

“There appeared to be a fight going on on the other side of the bridge, with several men attacking one man.”

Workers in the London Bridge area state they are being kept inside their places of work.

One worker told Sky News they could see a woman being carried from the bridge.

Police are still demanding people “move away” from the area.

Another worker in one of the offices near to the bridge say the atmosphere is “tense” and officers are telling employees to “stay away” from the windows.

One eye witness told Sky news: “We saw lots of police cars head towards the bridge.

“We saw a man on the ground with people pointing guns at him.

“At that point we were escorted away from the window.”

Police have cordoned off nearby Tooley Street, while trains are also not running from London Bridge train or Tube stations.

The British Transport Police said on Twitter: “We are aware of an incident at #LondonBridge and are assisting our colleagues at @metpoliceuk.

“London Bridge station is currently closed and trains are none stopping.

Another video taken from inside a bus on London Bridge showed three armed police officers pointing down the west-side footpath.

Videos taken from people stuck on busses at the scene show a crowd flocking around an injured person at the Monument side of the Bridge.

Workers told Sky News they are now being evacuated from buildings.

Police have also been pictured on boats on the Thames.

They are reported to be stopping traffic on the water also.

It read: “We have now declared a major incident and have a number of crews at the scene in London Bridge.”

Prime Minister Boris Johnson said he is being kept updated on the “major incident”.

He said in a statement from No10: “I’m being kept updated on the incident at London Bridge and want to thank the police and all emergency services for their immediate response.”

People in offices continue to be evacuated.

The Met Police say the incident is an “isolated attack” and there will not be further instances.

They added the incident is “terror-related”.