90 wild #horses dead, due to #drought near Alice Springs, #Australia 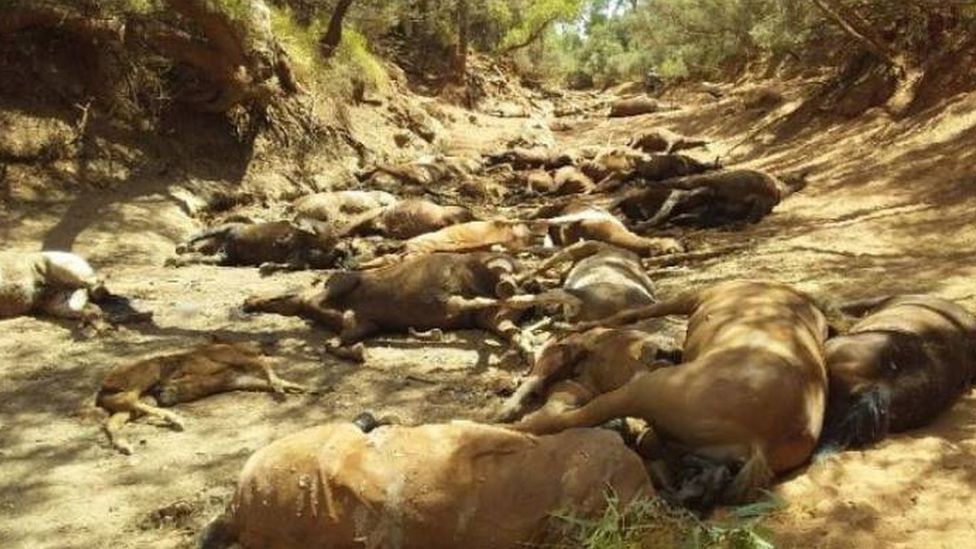 An extreme heatwave in Australia has led to the deaths of more than 90 wild horses in the outback, authorities say.

Rangers found dead and dying animals in a dried-up waterhole near Alice Springs, in the Northern Territory, last week.

About 40 of the animals had already died from dehydration and starvation. Surviving horses were later culled.

It comes amid record-breaking heat, with temperatures hitting 49.5C north of Adelaide in South Australia.

The mercury rose to 47.7C in the city itself on Thursday, breaking a record set in 1939.

Australia has experienced a fortnight of extreme heat that has broken dozens of records across the nation.

More than 13 towns in the state of South Australia have seen heat records eclipsed.

Emergency services in more than 13 districts are on alert for fear of possible bushfires.

Meanwhile in Alice Springs, near where the horses were found, temperatures have exceeded 42C for almost two weeks – more than 6C above January’s typical average, according to Australia’s Bureau of Meteorology.

Rangers came across the horses after their absence was noted by a remote community, said local authority Central Land Council (CLC).

“I was devastated. I’d never seen anything like it – all the bodies,” he told the BBC.

Another local, Rohan Smyth, told the ABC that water was “normally there” and that the horses “just had nowhere to go”.

The council said it had organised a cull of the remaining horses because they were found close to death. 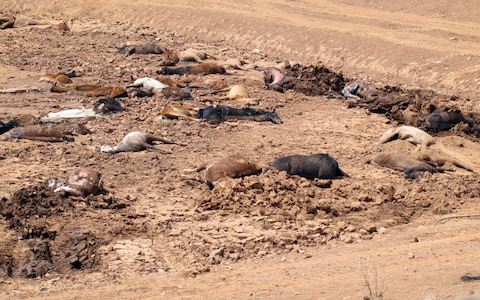 Navajo leaders say they see same problems every year as a result of growing herds of feral animals CREDIT: AP
The animals lie in neat circles around the pond that was supposed to sustain them as spring temperature rose and water became harder to find.
Instead, they collapsed in the mud, exhausted and weakened from drought.
Almost 200 feral horses have been found dead around a pond in Navajo land in northern Arizona, according to tribal leaders, the victims of overpopulation and dwindling water resources.
Jonathan Nez, vice president of Navajo Nation, said the deaths were an annual problem that had been getting worse.
“These horses weren’t shot or maliciously killed by an individual,” he said. “These animals were searching for water to stay alive.
“In the process, they, unfortunately burrowed themselves into the mud and couldn’t escape because they were so weak.”
Photographs show the carcases of dozens of horses were they had fallen around the stock pond in Gray Mountain.
Tribal officials say they are struggling to cope with a feral population that has grown to as many as 70,000 feral horses on the Navajo Nation.
Animals were once accustomed to finding water at the stock pond, but locals say it has dried up more quickly in recent years.
This time around a particularly dry winter has made conditions even worse. In California it made for a season of extreme wildfires while New Mexico and Arizona are still struggling with intense water shortages.
“This tragic incident exemplifies the problem the Navajo Nation faces in an overpopulation of feral horses,” said President Russell Begaye.
Federal and tribal officials have begun the gruesome business of disposing of their remains, spreading hydrated lime over the animals before burying them.
In all, they counted 191 carcases.
“The horses are anywhere from thigh to neck deep in the mud. Some are even buried beneath others,” said Nina Chester, of the office of the president. “This is our most humane and safest option.”
The plan is to cover over the pond completely, redirecting its meagre water flows elsewhere.
Courtesy of http://www.telegraph.co.uk
https://tinyurl.com/ydecxzvb
May 4, 2018

Dozens of cattle and horses dying due to disease in Mazatan, Mexico

Dozens of cattle and horses dying due to disease in Mazatan, Mexico