Thousands of dead seal pups wash up, ‘a mystery’ on coast of Namibia #Seals

© Provided by The Independent

Thousands of dead seal pups have been washed up on land in Namibia – raising consternation from animal conservation groups.

Cape fur seals, who are often called the “dogs of the ocean” due to their playful nature, will often desert their young or abort their foetuses if there is a dearth of food around.

“This is the situation at Pelican Point, Namibia,” his organisation tweeted. “All the little red circles mark dead seal pups. A rough estimate brings the numbers to more than 5,000 at our seal colony alone. This is tragic, as it makes up a large portion of the new pup arrivals expected in late November.”

Cape fur seals can predominantly be found along the coastlines of Namibia and South Africa – stretching to the southern tip of Angola in the north.

“That’s the height of pupping that we would normally expect but what has been happening this year is there has been an increase in abortions that was first seen starting in August and really sort of peaked just last week in October.”

She said Mr Dreyer, an activist who began rescuing seals on his own at Pelican Point years back, has seen very thin females and this is worrying.

Dr Gridley, who is also a researcher at Namibian Dolphin Project, added: “There are about 1.7 million cape fur seals in total and about a million of those are actually in Namibia so in terms of the overall number of animals, they are quite resilient to these effects.

“But one issue that we do think might happen in the future is you will see a dip in reproduction potentially going forward particularly now for those animals that have unfortunately died.

“They are not going to be recruited into the population, so you might see a localised effect at the Pelican Point colony and also we are trying to monitor to see whether there is a wider scale impact that might affect other colonies as well.”

A shortage of food and disease spreading have been suggested as potential reasons behind the washed up dead seal pups. The deaths are now being looked into by the nation’s fisheries ministry.

Hundreds of dead seals have washed up on shores in Cape Breton and near Halifax in recent days, prompting an investigation by the Marine Animal Response Society.

Andrew Reid, the society’s response co-ordinator, said it has received a number of reports over the last week about juvenile seal carcasses washing ashore in Cape Breton and Sambro, N.S., just outside Halifax.

Reid said there are believed to be several hundred dead seals in total, including roughly 70 in the Sambro area.

Eleven washed up on Geoffrey Howard’s family property in West Pennant, just outside of Sambro. He said he went out to look after hearing his neighbour counted 27 along the shoreline on his property.

Most of the seals were within about 10 metres of each other. He said the sight was “mysterious.”

“What natural occurrence could have caused so many seals to wash up at once? It wasn’t so much fear, it was more curiosity,” he said.

282 #seals found dead during past year on beaches in #Alaska, #USA 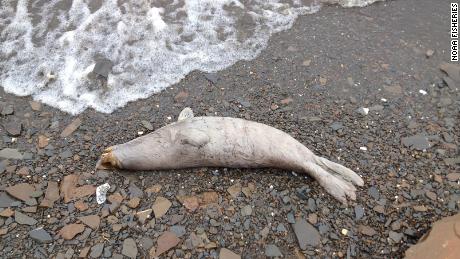 The National Oceanic and Atmospheric Administration on Thursday declared the seal die-off an “unusual mortality event,” a designation that allows extra resources to be used to determine the cause.

So far, 282 seal carcasses have been discovered since June 2018. Fewer than half – 119 – were found last year, NOAA said. That is five times the normal morality rate for such seals, according to NOAA.

The carcasses likely account for a small fraction of the total number of dead seals, as scientists assume the majority of stricken animals would sink after dying or otherwise never make it to shore, said Julie Speegle, an Alaska spokeswoman for NOAA’s Fisheries Service.

The die-off comes as Arctic Alaska sea ice is scarce and sea temperatures are unusually high – conditions most scientists attribute to global warming brought on by human-caused increases of heat-trapping greenhouse gases in Earth’s atmosphere.

Those warm conditions may be a possible cause of the die-off, Speegle said.

“That’s definitely one of a number of factors,” she said.

The die-off has affected bearded seals and ringed seals, which are listed as threatened under the U.S. Endangered Species Act, and spotted seals, which are not. All three species depend on floating sea ice for resting, pup-rearing and other critical life functions.

20 dead penguins, 3 dead sealions and 2 seals on beaches in Rio do Sul.

60+ dead #seals found washed up along the coast in #Alaska, #USA 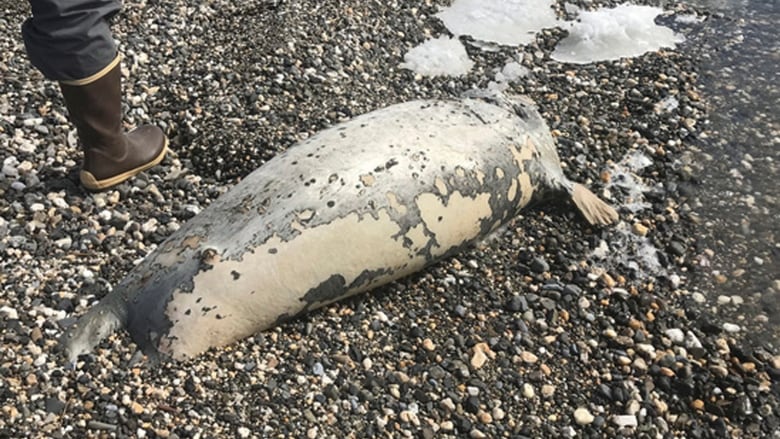 At least 60 dead seals have been discovered along beaches of the Bering Sea and Chukchi Sea in northwestern Alaska, and scientists are trying to determine what caused their deaths, the National Oceanic and Atmospheric Administration (NOAA) said on Wednesday.

The bearded, spotted and ringed seals have been found at sites ranging from southern edge of the Bering Strait region to the Chukchi coastline above the Arctic Circle, NOAA’s Fisheries said.

Ice in the Bering and Chukchi seas has been far scarcer than normal, and sea-surface temperatures have been far higher than usual, according to scientists and agency reports. But the cause of the seal die-off is as yet unknown, said Julie Speegle, an Alaska spokesperson for NOAA Fisheries.

“We are mobilizing to get our marine mammal experts and our partners there to get some samples,” she said. “It could be a harmful algal bloom. It could be a number of things.”

This porpoise, along with seven other marine mammals, have been found dead along the Dorset coast (Source: Andy Earley)

Wildlife experts are raising their concerns after eight marine mammals washed up along the Dorset coast during a three-week period.

Since February 4, six dolphins and porpoises, and two seals, have been discovered dead by the public and conservation experts are worried the deaths could be linked to a nearby oil well drilling that started this month.

Emma Rance, a marine conservation officer at the Dorset Wildlife Trust, told Yahoo News UK: “I have looked back into records between 2005 and 2013 and on average for January and February there are usually only two or three strandings.

“In fact, I remember in the whole of winter there would only be two or three, so having eight is highly unusual.”

“We do not know for sure what the cause of death is but given the location of the oil rig in an area of rich marine life we are very concerned.

“Dolphins, whales and seals are at the high end of the food chain and so they can tell a story with their bodies about the state of our oceans and seas.”

The trust is now working with the Cetacean Strandings Investigation Programme, the official organisation for marine strandings, to establish the animals’ cause of death.

Miss Rance said: “It’s 2019, we are part of the Paris Climate Agreement, we have a Climate Change Act.

“We should not be drilling deep into the seabed for fossil fuels in one of the country’s most important marine areas when we have many renewable energy options.”

The drilling, carried out by Corallion Energy, had been due to start earlier this year but as a result of operational reasons the rig arrived late, meaning it will not finish on the original end date of February 28.

Mrs Rance said the extension means it will continue drilling into March, when the migration and spawning season for many animals will begin.

400+ dead or dying seals washed up this year in Maine, USA

A dead seal lies on the shore at Bayview Beach in Saco on Aug. 12. Staff photo by Shawn Patrick Ouellette

As the number of dead and stranded seals washing up on southern Maine beaches rises by the day, researchers are linking the sudden die-off to decades of chemical pollution that made the seal population vulnerable to toxins and disease.

“We don’t think there is any possibility that these animals are biologically healthy,” said Susan Shaw, a marine biologist based in Blue Hill.

Shaw has studied the effect of man-made toxins such as polychlorinated biphenyl – PCB – on the long-term health of harbor seals for almost two decades. Her findings, based on flesh samples, show that the population of harbor seals in the Gulf of Maine is loaded down with toxic, immune-suppressing chemicals, conclusions that are in line with a thick body of scientific evidence from studies of whales, dolphins, porpoises and other marine animals in the U.S., Canada and Europe. “They have body burdens that are just staggering,” Shaw said.

“We find this in young animals. They are immune-suppressed from birth,” she added. “When some pathogen comes along like this, they are very susceptible to becoming very sick and dying very quickly.”

Marine mammal experts are at a loss to explain why a large number of harbor seals have turned up dead on beaches in southern Maine this summer.

The most recent cluster of deaths was reported Monday when the carcasses of 11 harbor seals, mostly pups, were discovered on Bayview and Kinney Shores beaches in Saco. Those beaches are situated between Ocean Park and Ferry Beach State Park.

In the past two days, more than 30 dead harbor seals have washed ashore on southern Maine beaches, including Wells Beach and Ogunquit Beach, said Lynda Doughty, executive director of Marine Mammals of Maine, which investigated the Saco seal deaths.

Doughty said her Harpswell-based nonprofit has turned to the National Oceanic and Atmospheric Administration to help determine the cause of the seal deaths in Maine. NOAA is analyzing tissue samples taken from the dead animals.

Researchers are in the process of determining how many dead seals have washed ashore in southern Maine this summer, Doughty said Monday.

In Saco, the seal carcasses were in various stages of decomposition and their ages varied widely, although most of the animals were pups, Doughty said.

6 dead seals wash up on a beach in Rhode Island, USA

It remains unclear what caused the animals’ deaths. The animal rescue program at Mystic Aquiarium is working with the manager of Second Beach to get more information.

Dale Wolbrink, Senior Director of Public Relations at Mystic Aquarium, said it is unknown whether all 6 seals washed ashore at the same time because the bodies were so badly decomposed.

Wolbrink said once they collect all the data they can find from the seals, beach personnel will bury them. 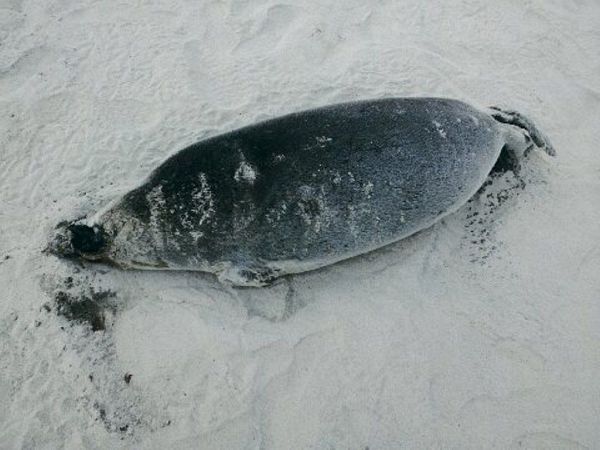 Photo: vk.com/anonim_03
One of the users of the popular pablika “Anonymous 03» narrated that during the holidays the resort Goryachinsk settlement with classmates, he came across a dead Baikal seals. Seen the homes of unknown author.
-Went to Goryachinsk, went to a class on the beach and were in shock-found 12 dead seals. I will not speak about their condition because it was awful, “noted in the post, which appeared in the community the previous day, 25 May.
And a day later in social networks “surfaced” and a picture of dead seals. Make snapshot and is already in the Barguzin district near Maksimihi. Customers pablika immediately stated: nothing out of the exhaust is not here.
-It is clear to everyone that they are already that year die en masse. The reason is overpopulation and lack of food at all, “said one participant in the comments” 03 “Anonym.
-Natural selection, in that nothing tragic there, “agreed another Subscriber. Even the population grew, and environmentalists say it is bad.
Courtesy of infpol.ru
http://tiny.cc/jraf1y
« Older Posts