In a new report prepared for Prime Minister Putin by the Institute of Physics of the Earth warned that America in the next two weeks is in danger of catastrophic proportions Earthquake.

Focusing on the U.S., Mexico, Central and South America, and the region along the west coast of the New Madrid zone Fault.

SCIENTISTS have urged government officials to prepare for a terrifying and unprecedented magnitude-9 mega-earthquake that would unleash a deadly tsunami with 30 metre-high waves. 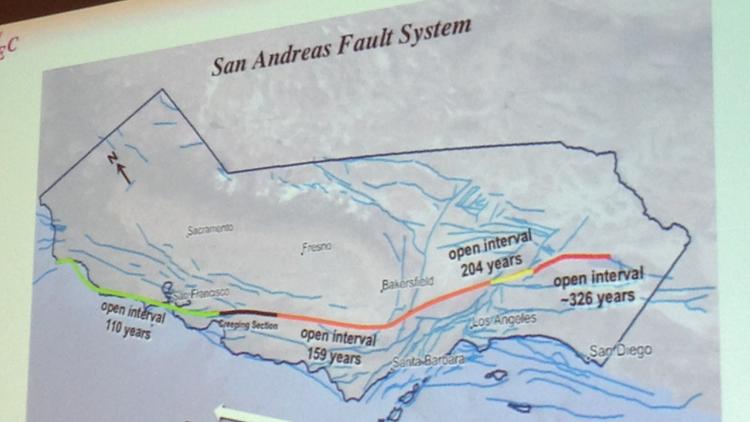 Although the Pacific plate is moving northwest relative to North America at about 16 feet, or 5 meters, every 100 years, the southern San Andreas fault has been quiet for more than a century.  (Thomas Jordan / Southern California Earthquake Center)
“The springs on the San Andreas system have been wound very, very tight. And the southern San Andreas fault, in particular, looks like it’s locked, loaded and ready to go,” Jordan said in the opening keynote talk.
Other sections of the San Andreas fault also are far overdue for a big quake. Further southeast of the Cajon Pass, such as in San Bernardino County, the fault has not moved substantially since an earthquake in 1812, and further southeast toward the Salton Sea, it has been relatively quiet since about 1680 to 1690.
Here’s the problem: Scientists have observed that based on the movement of tectonic plates, with the Pacific plate moving northwest of the North American plate, earthquakes should be relieving about 16 feet of accumulated plate movement every 100 years. Yet the San Andreas has not relieved stress that has been building up for more than a century.
Jordan said it’s important that California focus on becoming resilient to a potential huge earthquake, one as strong as a magnitude 8. He praised Los Angeles’ plan to require earthquake retrofits on apartment and concrete buildings, pushed into law by Mayor Eric Garcetti.
“It’s remarkable that this happened,” Jordan said. “We know politically how difficult it is to make these kinds of changes.”
Other areas of focus have included strengthening Los Angeles’ vulnerable aqueduct systems and its telecommunications networks.
A 2008 U.S. Geological Survey report warned that a magnitude 7.8 earthquake on the southern San Andreas fault would cause more than 1,800 deaths, 50,000 injuries, $200 billion in damage and severe, long-lasting disruptions. Among the predicted problems: The sewer system could be out of commission for six months.
Such an earthquake could cause shaking for nearly two minutes, with the strongest shaking in the Coachella Valley, Inland Empire and Antelope Valley, but it also could send pockets of strong shaking into areas where sediments trap shaking waves, such as the San Gabriel Valley and East Los Angeles.
The devastating potential of the fault became clear with a 1857 temblor, which had an estimated magnitude of 7.9. It became known as the Fort Tejon quake. The name is something of a misnomer because it started farther north, way up in Parkfield in Monterey County. The quake then barreled south on the San Andreas for about 185 miles, through Fort Tejon near the northern edge of Los Angeles County, then east toward the Cajon Pass in San Bernardino County, near what is now the 15 Freeway.
The quake was so powerful that the soil liquefied, causing trees as far away as Stockton to sink. Trees were also uprooted west of Fort Tejon. The shaking lasted 1 to 3 minutes.
Even though the San Andreas fault does not go directly into Los Angeles — it is 30 miles away from downtown — the city is expected to be heavily shaken by a large earthquake on that fault. For instance, simulations of a possible magnitude 7.8 quake on the San Andreas fault that begins at the Salton Sea and spreads west toward the San Gabriel mountains show seismic shaking waves “bent into the Los Angeles area,” Jordan said.
Using the world’s largest supercomputer at the time, the Southern California Earthquake Center in 2010 unveiled a simulated magnitude 8 earthquake that begins in Monterey County, like in 1857, but travels even farther south, heading toward the Mexican border. The L.A. Basin and the San Fernando Valley would be hit hard because the shaking would be trapped by soft soils in the valley and basin.
“You can see that this area of influence by the shaking has now expanded out to huge proportions,” Jordan said. “You see that big directivity pulse out in front, as that energy is being shoved down that fault, that directivity pulse leads energy into seismic waves that excite the sedimentary basins, like the San Fernando Valley and the Los Angeles Basin,” and through San Bernardino, Jordan said.
“You’ll notice large shaking in the Los Angeles region persisting for long periods of time,” he said.
Courtesy of latimes.com
http://tinyurl.com/z3nmj62
July 19, 2015

Locked, Cocked and Ready to Rock!

April 22, 2014–Locked, Cocked and Ready to Rock! Sunday (April 20) the “gun” was loaded with Jupiter square Uranus and Jupiter opposite Pluto; and Uranus square Pluto yesterday. Today the gun will be cocked with Mars square Jupiter. Tomorrow the gun will be fired when either PNG or the U.S. Pacific Northwest is struck by the strongest earthquake of the 21st or 20th Century. Mars will “pull the trigger” on April 23 at 12:09AM (Mars opposite Uranus) and 6:47AM (Mars square Pluto). I believe that the 6:47AM time will be the stronger of the two, i.e., this will set off the whole process.

On the map, the two regions are opposite each other. A 9.8 magnitude earthquake, in either of these locations, will be biblical and catastrophic on a scale not see in modern history. An event of this magnitude in the U.S. NW would through the…

April 21, 2014–Let the Games Begin: The four days of terror have started. From April 20 to 24 will see a 9.8 magnitude earthquake near Paupa New Guinea (PNG) or a release of near the Cascadia Fault Zone of the U.S. Pacific Northwest from 8.9 to 9.4 magnitude.

The Island of New Guinea is the second largest in the world, after Greenland; and is divided into the Indonesian West and the PNG East. The series of large quakes that have occurred in PNG, and the Solomon Islands, are shown on the map above, just under the “24 Quakes in 23 Days” banner. If the Super-Quake sends the tsunami to the west, the Philippines are gone and Japan is severally damaged along with most of Southeast Asia. If the tsunami is to the east then North America, Mexico, Latin America, Peru and Chile are in serious trouble.

March 2014 – OREGON  – The Cascadia subduction zone is less known than the San Andreas fault, which scientists have long predicted will produce The Big One. But in recent years, scientists have come to believe that the Cascadia is far more dangerous than originally believed and have been giving the system more attention. The Cascadia begins at a geologically treacherous area where three tectonic plates are pushing against each other. The intersection has produced the two largest earthquakes in California in the last decade — Sunday’s 6.8 temblor off Eureka and a 7.2 quake off Crescent City in 2005. The area has produced six quakes of magnitude 7.0 or greater in the last 100 years, the California Geological Survey said. Officials in Northern California as well as Oregon and Washington are beginning to address the dangers. National Oceanic and Atmospheric Administration tsunami researchers are testing a new generation of…