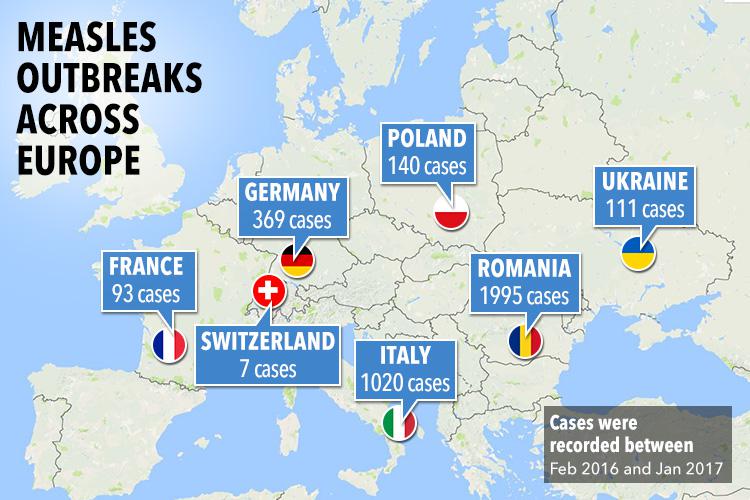 Seven countries, where vaccination rates are low, have had the worst outbreaks in Europe
Measles is spreading across Europe wherever immunisation coverage has dropped, the World Health Organization is warning.
The largest outbreaks are being seen in Italy and Romania.
In the first month of this year, Italy reported more than 200 cases. Romania has reported more than 3,400 cases and 17 deaths since January 2016.
Measles is highly contagious. Travel patterns mean no person or country is beyond its reach, says the WHO.
For good protection, it’s recommended that at least 95% of the population is vaccinated against the disease.
But many countries are struggling to achieve that.
Most of the measles cases have been found in countries where immunisation has dipped below this threshold and the infection is endemic – France, Germany, Italy, Poland, Romania, Switzerland and Ukraine.
Preliminary information for February suggests that the number of new infections is rising sharply, says the WHO.
WHO regional director for Europe Dr Zsuzsanna Jakab said: “I urge all endemic countries to take urgent measures to stop transmission of measles within their borders, and all countries that have already achieved this to keep up their guard and sustain high immunisation coverage.”
The European Centre for Disease Prevention and Control says that between 1 February 2016 and 31 January 2017 the UK reported 575 cases of measles.
The MMR (measles, mumps and rubella) vaccine is available on the NHS for babies and pre-school children.
Lagging immunisation
Robb Butler, of the WHO Regional Office for Europe, says there are a number of reasons why vaccination coverage has waned in some regions.
“In some countries, like the Ukraine, there have been supply and procurement issues.”
Then there’s vaccine hesitancy. Some people are fearful of vaccination, while others are complacent or find it an inconvenience, he says.
In France, for example, people need to make an appointment with their doctor to get a prescription, go to the pharmacy to collect the vaccine and then rebook with their doctor to have the jab administered.
“We need to get to the point where we appreciate that people have busy lives and competing priorities.”
Dr Mary Ramsay, Head of Immunisation at Public Health England, said: “England’s uptake of MMR vaccine by five years of age has reached the WHO’s target of 95%.
“In the last year, the measles cases confirmed in England have mainly been in older adolescents and young adults with many linked to music festivals and other large public events. Individuals of any age who have not received two doses of the MMR vaccine, or those who are unsure, should speak to their GP – it’s never too late to have the vaccine and measles can still be serious in adults. We are continuing to invest in programmes which encourage uptake of the vaccine to ultimately consign measles to the history books.”
Measles
Courtesy of BBC News

The happiest place on Earth just got a bit sadder for some of its employees.
Due to a recent measles outbreak, several Disneyland workers are being tested for the virus.
Five employees were diagnosed with measles, and three of them have fully recovered, Disneyland says.
“The measles outbreak exposure period of December 17-20 at the Disneyland Resort is over, and all cases from this exposure should have occurred by January 10, 2015,” the California Department of Public Health says. “No new cases have been identified in guests who visited after that time period.”
Disneyland said it was informed of measles cases among employees on January 15.
Previously, public health officials in California and Utah confirmed nine cases among visitors to either Disneyland or Disney California Adventure Park.
After Orange County health officials notified Disneyland of that on January 7, “We immediately began to communicate to our Cast to raise awareness,” the theme park’s Chief Medical Officer Dr. Pamela Hymel said in a statement. Disneyland refers to its employees as cast members.
“In an abundance of caution, we also offered vaccinations and immunity tests. To date, a few Cast Members have tested positive and some have been medically cleared and returned to work. Cast Members who may have come in contact with those who were positive are being tested for the virus. While awaiting results, they have been put on paid leave until medically cleared.”
It’s not clear how many of the theme park employees were vaccinated.
So far, five children and 13 adults have been diagnosed with measles in Orange County, according to the county health agency. Before Tuesday’s announcement, the California Department of Public Health said on its website that 36 measles cases had an epidemiologic link to the Disney outbreak, 41 total in the state.
One school in Huntington Beach has barred children who could not prove that they were vaccinated for measles from going to school until January 29, according to the county health agency.
A highly contagious virus
According to the Centers for Disease Control and Prevention, measles is a respiratory disease caused by a virus and spread through the air. It was considered eradicated in the United States in 2000, though 2014 saw a record-breaking number of confirmed cases: 644 from 27 states, according to the CDC. That’s “the highest number of cases since measles elimination was documented in the U.S. in 2000,” the CDC says on its website.
“Travelers to areas where measles is endemic can bring measles back to the U.S., resulting in limited domestic transmission of measles,” read a statement from the California Department of Public Health. “Disney and other theme parks in California are international attractions and visitors come from many parts of the world, including those where measles is endemic.”
As for symptoms, “measles starts with a fever, runny nose, cough, red eyes and sore throat,” according to the CDC.
Those showing such symptoms shouldn’t be bashful about seeing their doctor, because a full body rash is likely to break out next. “If you have symptoms, and believe you may have been exposed, please contact your health care provider,” said Dr. Ron Chapman, director of the state health department.
Chapman says prevention is the key.
“The best way to prevent measles and its spread is to get vaccinated.”
CNN’s Kevin Conlon contributed to this report.
Courtesy of Fox8
http://tinyurl.com/o6dpjgv
November 2, 2013
Emergency Vaccinations Have Been launched Against The Contagious Viral Measles Illness In Sudan

South Sudanese health officials have launched an emergency vaccination campaign against measles after 14 children died in a suspected outbreak of the contagious viral illness in a payam in Eastern Equatoria state.The deaths occurred over the past week in Lotimor payam. All of the children who died were under the age of five, state health ministry director, Elijio Omoro Tahir, said.

Health officials learned of the deaths on Tuesday and immediately lodged a request with the UN Mission in South Sudan (UNMISS) for a flight to take health workers to Lotimor to conduct tests to determine if the outbreak was indeed measles, Tahir said.

The World Health Organization (WHO) said as many children under five years old as possible will be vaccinated over the next three days in Lotimor.

If the measles outbreak is confirmed, the Ministry of Health will put together a state-wide immunization campaign, Tahir said.

Measles is a highly contagious respiratory disease caused by a virus. South Sudan’s health ministry said only nine percent of South Sudanese children under the age of one have been immunized against all so-called childhood diseases, including measles.

In the United States, the Centers for Disease Control and Prevention recommends immunizing children against measles once between the ages of 12 months and 15 months and again between four and six years of age.

More than 440 cases of measles have been reported in South Sudan this year. If confirmed, the cases in Lotimor payam would be the first incidence of measles in Eastern Equatoria state, the WHO said.