Cholera spirals out of control in Yemen’s Hudaydah

Fires rage for third day in Spain and Portugal 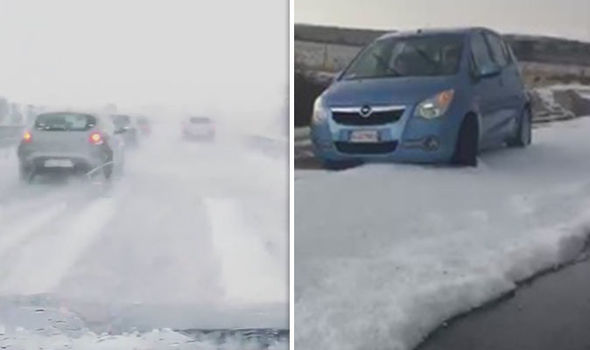 A MYSTERIOUS ice blast covered an Italian island in a 30cm-deep ‘snow blanket’ after the temperatures suddenly plunged yesterday from 35C to 12C despite a record-breaking heatwave across the continent.
Europe looks set to experience its hottest temperatures on record later today while a bizarre hailstorm and 22C plunge in temperature hit Italy.
The Italian island of Sardinia was experiencing a sweltering heatwave along with the rest of Europe when the bizarre ice blast took place on Thursday this week.
Witnesses described a “snow blanket” on the roads, just minutes after a sweltering 35C heatwave.
Temperatures plummeted to just 12C, while a 30cm-deep blanket of hailstones caused havoc on the busy roads.
The violent hailstorm was caught on camera by drivers on the Strada 131 in Campeda, Sardinia, prompting dozens of requests to emergency services.
The sudden hailstorm caused transport chaos for some motorists, including an accident between two cars.
The cold temperature blast was also felt in nearby towns, including Mamoiada, Sorgono and Tonara.
Flash flooding struck the nearby region of Nuorese, with emergency services called out to empty water from flooded basements.
Mayors and traffic wardens have been at work since to restore road conditions in the affected zones.
Despite this week’s ice blast, the Italian island is back to scorching temperatures of 28C today.
This comes amid predictions that the scorching heatwave in Europe will the continent’s all-time record temperatures today, with 50C expected in Portugal and Spain.
Weather centres in Spain and Portugal have issued “extreme risk” warnings, after three people were found dead from heatstroke in the past 24 hours.
The temperatures have continued through the night, with temperatures above 30C even at midnight in Spain.
Viewers online describe the weather videos in Sardinia as “unbelievable” while others claimed “the end was near” due to the bizarre weather.
Courtesy of express.co.uk
https://tinyurl.com/y8tav48h
August 5, 2018