A flight instructor and student made an emergency landing on a New Jersey golf course Saturday afternoon, escaping the small plane with no injuries, the general manager of the course said.

The people on the Mountain Ridge Country Club golf course in West Caldwell got an up close view of the landing, said Stephen Wolsky, the course manager.

Police said a call about the landing came in shortly after 2 p.m. Authorities were investigating.

The Viet Nam National Hospital of Pediatrics in Ha Noi is receiving about 1,500 -1,700 children per day, 30 per cent of whom are being hospitalised with illness relating to the hot weather. The heat wave that hit northern and central provinces in the last few days is expected to end on Sunday

At night, many families tour the streets on their motorbikes to keep cool. Many carry two or three children and the family dog.

At noon yesterday, the temperature in the capital soared above 40 degrees Celsius, the highest officially recorded.

In northern and central provinces, the mercury leapt to between 36 and 39 degree, according to the National Centre for Hydro-Meteorological Forecasting.

In Quy Hop and Tay Hieu in central Nghe An Province, the temperature also reached more than 40 degrees.

The heat wave is predicted to weaken in Ha Noi and the north today, but no relief is expected until next Monday.

He agreed that this year, the heat waves seem to last longer than in previous years.

Normally, a heat wave would last three to five days, weaken over the next few days, and then return.

However, the first heat wave this month began on May 9 and was quickly followed by two more.

He warned that temperatures of more than 42 degrees could hit Ha Noi during summer.

At the meeting with the municipal construction department and the water supply company Vinaconex on Thursday, Dung asked relevant authorities to work on methods to distribute water to the whole city and resolve technical issues, problems that have led to water shortages in some areas across the city.

“Ensuring that no households are without water is the most urgent task”, he said.

Currently, there are 18 water plants in the city. Vinaconex Clean Water JSC supplies 30 per cent of the city’s total water demand.

In the past several days, people in many districts have suffered dehydration with temperatures reaching up to 39 degrees Celsius.

Many households have had to pump water from wells, but even then the water has been dirty and in limited portions, he said.

Some areas in the Tay Ho, Hoang Mai and Ha Dong districts are in the same situation.

Director of the municipal Department of Construction Le Van Duc said the water shortage on hot days had been caused by a spike in the demand for water by city residents, power cuts, and the degradation of underground water sources due to over-exploitation.

Duc said water supplies would be difficult to guarantee if the water pipeline from the Da River to Ha Noi kept breaking.

The water has ruptured on five separate occasions since it was put into operation in 1997, leaving thousands of households in the city without fresh water for days.

Nguyen Van Ton, CEO of the Vinaconex Clean Water JSC said that there was about 80,000 cubic metres of unused water left in the Da River, but substandard water pipes had made it inaccessible to households in need of fresh water.

Constant breakages and leaks was out of the company’s control, he said, adding that the best way to resolve the problem had been to replace it with another pipeline system built with better materials.

The construction of 29km long pipeline from the Belt Road 3 to Hoa Lac T-Junction would supply more 80,000 cubic metres to the city. However, the investment capital of about VND1.1 trillion (US$52.3 million) was a big problem to the company. The company has proposed the city authority to get loans with favourable interest rate of 5-6 per cent per year, he said.

The construction of the Da River Water Plant, now in its second phase, was also a key measure to curb the current water shortage.

Minister Dung also asked authorities to mobilise additional water container trucks to areas in need of fresh water. He also instructed the department to invest more money in speeding up the construction of the water plant.

A valve on the Calgary-bound plane was incorrectly set, Air Canada media spokesperson Peter Fitzpatrick said in an email. Fuel overflowed as the aircraft was being filled, and emergency services were called to the scene.

Passengers evacuated the plane as a precautionary measure, and the spill was cleaned up. The aircraft eventually departed to Calgary, and safely landed about 40 minutes later than expected.

A plane crash has been reported Southeast of Arvin, according to the Arvin Police Department.

23ABC was on the scene and it was reported that the plane was upside down near Mullix Road and Tejon Highway.

The Kern County Fire Department said two males were piloting the area on a day flight, when they noticed smoke coming into cockpit. The KCFD said the males thought oil was leaking from the plane and decided to land.

The KCFD said the two males thought the area was safe to land, but didn’t realize the terrain wasn’t suitable for such a feat, which ended up turning the plane upside down once it touched the ground.

The two licensed pilots were taken to Kern Medical Center for observation after reporting minor scrapes and bruises.

Wildfire out of control in Palm Beach County, Florida, USA 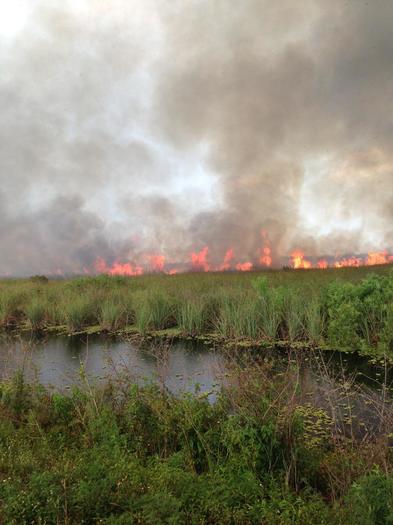 Wildfire season is starting to sizzle, as firefighters battled a 2,630-acre Everglades blaze in western Palm Beach County on Friday.

Fueled by dry conditions and steady winds, the fire was burning near high-voltage power lines that run west toward Fort Myers, said Scott Peterich, spokesman for the Florida Forest Service.

“We don’t know how it got started, but we don’t believe it was lightning,” he said.

Although it’s unlikely the fire could reach high enough to burn the wires, smoke and heat could damage them and cause power outages, Peterich said.

He said firefighters are using water from a nearby canal to keep the flames clear of the wires.

Hydroelectric power in Texas has all but dried up as the state’s drought continues, according to a statewide review of generation sources.

The amount of hydropower generated across Texas dropped 24 percent from 2012 to 2013, the Austin American-Statesman reported.

Only a fraction of the state’s energy needs come from hydroelectricity but the downturn is yet another consequence of the drought.

“You can really see the impact of drought over time,” said Robbie Searcy, a spokeswoman for the Electric Reliability Council of Texas, which operates the state’s energy grid.

Apart from an energy emergency, hydropower is rarely used in Texas anymore, with coal and natural gas-fired power plants producing most of the state’s electricity needs.

As a young congressman, Lyndon B. Johnson worked to establish a series of dams to control flooding in the Austin area. The power generated by the water rushing through those dams was delivered to the Hill Country, vastly improving the standard of living for what was then among the poorest areas in the U.S.

Half a century ago, the Lower Colorado River Authority’s hydroelectric capacity made up about half of its overall generating capacity. Today it’s a mere 5 percent, according to Ryan Rowney, vice president for water operations.

Currently, the authority only releases water for fish and wildlife and some mandated irrigation needs, and has impounded billions of gallons of water that used to be released to farmers downriver.

The combined storage of Lakes Travis and Buchanan, the chief reservoirs for Central Texas, has dwindled to 35 percent of capacity, and customers may have to cut water use 20 percent by midsummer if the drought continues.

The first hurricane of the eastern Pacific season formed hundreds of miles off Mexico’s coast Saturday and could become a major storm by Sunday though it poses no immediate threat to land, forecasters in Miami said.

Amanda emerged as a Category 1 hurricane about 645 miles (1,035 kilometers) southwest of Manzanillo, Mexico, and had sustained winds of 75 mph (120 kph). The National Hurricane Center in Miami said Amanda was moving west-northwest Saturday at about 5 mph (7 kph) while rapidly intensifying.

Senior Hurricane Specialist Stacy Stewart told The Associated Press that Amanda does not appear to pose any threat to mainland Mexico at least over the next five days. He said it could become a major hurricane sometime Sunday, still far out in the Pacific.

“The forecast is calling for it to remain far offshore,” Stewart said, adding the storm could eventually generate strong surf, especially along Mexico’s Baja California coast.

No coastal watches or warnings were in effect Saturday.

The eastern Pacific season opened May 15, two weeks ahead of the six-month Atlantic hurricane season that begins June 1.

Federal forecasters with the National Oceanic and Atmospheric Administration released forecasts for both areas recently. In the Atlantic, they said, they expect eight to 13 named tropical storms, of which three to six could become hurricanes. Of those, one or two major hurricanes with winds over 110 mph are forecast.

In the eastern Pacific, Stewart said, NOAA forecasters are calling for 14 to 20 named tropical storms, of which seven to 11 are forecast to become hurricanes. Three to six of those hurricanes are expected to become major hurricanes, he said.