Mexican officials have warned northwestern communities to be on alert today as Tropical Storm Kay churns off the Pacific coast.
At 0900 GMT the center of Kay was located some 495 kilometres southwest of the southern tip of the Baja California peninsula, the US National Hurricane Center (NHC) reported.
The storm, which was heading towards the northwest at a speed of six miles per hour, was packing maximum sustained winds of 50 miles per hour, the NHC said.
Even though the storm was not expected to make landfall, Mexican officials warned coastal communities to be on alert.
Kay could unleash “very strong focused storms in southern Baja California,” Mexico’s National Meteorological Service said. It urged residents to “exercise caution.”
According to the NHC, Kay’s tropical storm force winds extend outward up to 60 miles from its center – not quite reaching land, but enough to churn up dangerous waves and pummel the region with heavy rain and strong winds.
Memory is still fresh of Hurricane Odile, which slammed Los Cabos on the southern tip of Baja California, in September 2014, killing six people and causing huge material damage.
Earlier in the month Tropical Storm Earl hit Mexico after weakening from a hurricane over Central America, bringing heavy rain and triggering floods along its path.
Courtesy of ndtv.com
http://tinyurl.com/j3m86sl
August 20, 2016 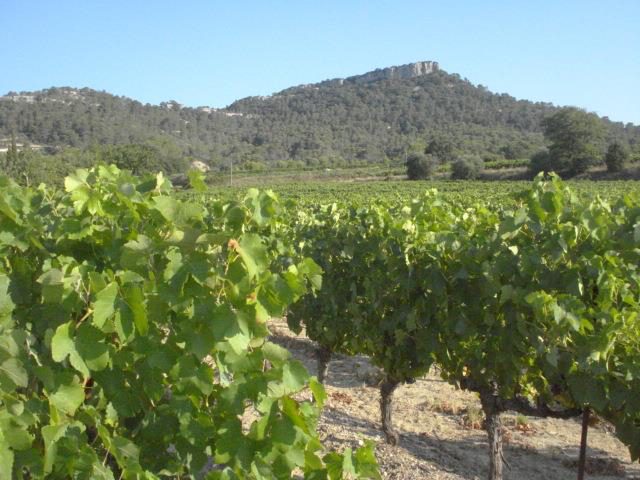 Before the storm (Photo: Mas Thélème) 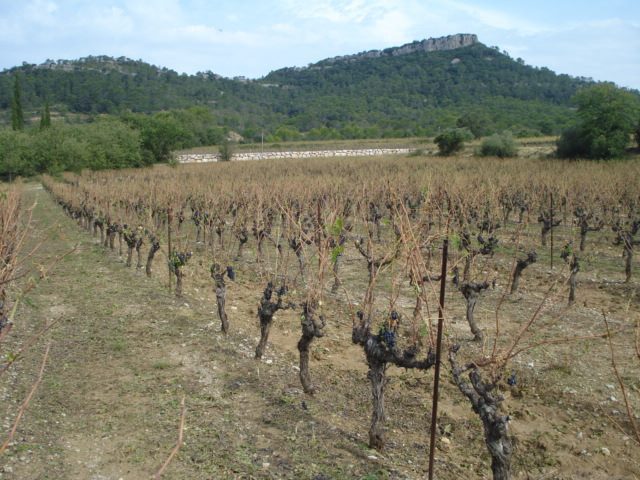 After the storm (Photo: Mas Thélème)

Mas Thélème, owned by Fabienne and Alain Bruguière, was one of the worst-affected domaines.

Established in 2003, Mas Thélème is a 7-hectare estate in the town of Lauret which produces around 20,000 bottles a year.

Mas Thélème’s entire crop of Syrah, Grenache and Cinsault was destroyed after a sudden hailstorm struck at 3pm on Wednesday 17 August – just a few short weeks before harvest.

“For us, everything is damaged. We have no more grapes,” Fabienne Bruguière told db.

Bruguière reported that the crops of three other winemakers in Lauret had also been destroyed in the storm.

According to online wine magazine Terre de Vins, up to 60% of production in the Pic Saint Loup AOC has been affected, with the communes of Lauret, Claret, Valflaunès, Sauteyrargues and Corconne all hit.

Such was the extent of the damage to vines in Pic Saint Loup that fears were raised for the potential yields of the 2017 harvest.

The cellar manager of La Gravette de Corconne, Stanislas Perrier, told Terre de Vins that whole parcels of vines in Lauret and Claret had been destroyed, with both grape bunches and leaves stripped.

Meanwhile Samuel Guibert of the Languedoc ‘Grand Cru’, Mas de Daumas Gassac, which is located around 35km from Pic Saint Loup, in Aniane, reported on Twitter that the hail devastation had missed his estate by a mere two kilometres.

Guibert said that the hail was thought to be the worst in 50 years, with hailstones as large as 5cm in diameter causing damage across a 10-15km corridor from Lunel to Pic Saint Loup to the north-east of Montpellier.

Powerful thunderstorms that produced 70-plus mph winds moved through the Jamestown area Thursday morning, damaging trees and knocking out power to more than 1,000 people. Janine Vining, a National Weather Service forecaster in Bismarck, said the weather service had tracked a group of storms that formed in Canada and moved southeast into North Dakota starting Wednesday night. “They were a cluster of storms, nothing too remarkable,” she said. Then the storms formed together and became very intense right over Jamestown around 6:30 a.m. Thursday, Vining said. The storm produced winds of 71 to 75 mph, according to Vining. She said the high wind speeds were unexpected. “Just north of Jamestown we had a wind speed of 35 mph,” she said. “When they (the storms) hit Jamestown, boom, they really hit.” Jamestown Police Chief Scott Edinger said there were many reports of trees and branches down around town, and the viaduct, the railroad underpass in the 100 block of 4th Avenue Northeast, was closed around 7:15 a.m. and reopened to traffic around 8:30 a.m.
Vining said a little less than an inch of rainfall was recorded at Jamestown Regional Airport. She said there were reports of an inch of rain elsewhere in Jamestown, but those reports were not official.
The storms’ high winds caused power outages that affected 1,100 Otter Tail Power Co. customers Thursday morning. Sarah Casey, an Otter Tail Power Co. communications specialist, said a substation in the downtown area of Jamestown went down and was the reason for most of the outage. Some areas lost power due to trees and branches falling on power lines.
The power went out in Jamestown between 6:45 and 7 a.m., Casey said. Some areas were restored quickly, and most areas were restored by 11:15 a.m. Casey said there are some isolated customers without power that will require some service work in order to get their power restored.
The high winds uprooted large trees around Jamestown, including one in front of the historic 1883 Stutsman County Courthouse. Work crews were busy all around Jamestown Thursday, removing debris. Jeremy Ford said he was at work at West End Hide, Fur & Metal Co. around 8 a.m. when he got a call from his neighbor saying a tree had fallen in the yard of the house he rents in the 500 block of 3rd Street Northeast. He came home and found a large tree laying on a car he owned parked on the street in front of his house. The impact caved in part of the roof of the car.
“I came home and low and behold there it (the car) was, under the tree,” Ford said.
Damage near Buchanan
Randy Blaskowski, a Buchanan-area farmer, said he could only shake his head at what some strong thunderstorms did to some of his bean and corn crops Thursday morning.
“Oh, we had lots of beans cut,” he said, “lots of hail that cleaned the beans and stripped the corn down to the cobs.”
Blaskowski said there was a 2-mile stretch of land near Buchanan that got hit extremely hard by hail, high winds and rains produced by a thunderstorm starting around 7 a.m. Thursday. He estimated he lost about two sections, that is 1,200 to 1,300 acres, of beans and corn Thursday morning.
The National Weather Service’s Bismarck office reported a 71 mph wind gust at Jamestown Regional Airport Thursday.
Blaskowski said he awoke Thursday morning to the sound of roaring.
“I looked outside and you couldn’t see even 3 feet; the wind was blowing so hard with the rain and the hail,” he said. “I’ve never experienced anything like this.”
Blaskowski said this was the third time hail had damaged some of the beans he had planted. He replanted some of the beans in June when a hail storm came through, then those newly replanted beans got hailed on again.
“They (the replanted beans) were regrowing again when we got the third hail storm this morning,” he said.
Blaskowski said he heard from his brotherin-law, who farms land in the Spiritwood area, that his Spiritwood land received similar damage.
“He sent me some photos from his phone showing his corn stripped of everything except the cob,” he said.
Courtesy of jamestownsun.com
http://tinyurl.com/jm2wqsa
August 20, 2016

Thousands of people were awakened by the sound of huge hailstones coming down early Thursday morning.
Golf ball to ping pong ball-size hail was reported throughout the city, causing damage to cars and trucks.
MTN News meteorologist Mike Rawlins said the storms virtually came out of nowhere.
“One minute we were fine and the next, the radar lit up with storms,” said Rawlins.
Showers and thunderstorms were in the forecast, but severe weather wasn’t a big concern.
“I expected some small hail, but nothing like what we got in Great Falls,” Rawlins said.
The National Weather Service did issue a Severe Thunderstorm Warning for Great Falls at 12:33 a.m. Thursday, but the storm was already dropping large hail on the city by the time it was disseminated.
Courtesy of kxlf.com
http://tinyurl.com/jpmgrbj
August 20, 2016

Another Strong Explosion Yesterday Morning At Santiaguito Volcano In Guatemala 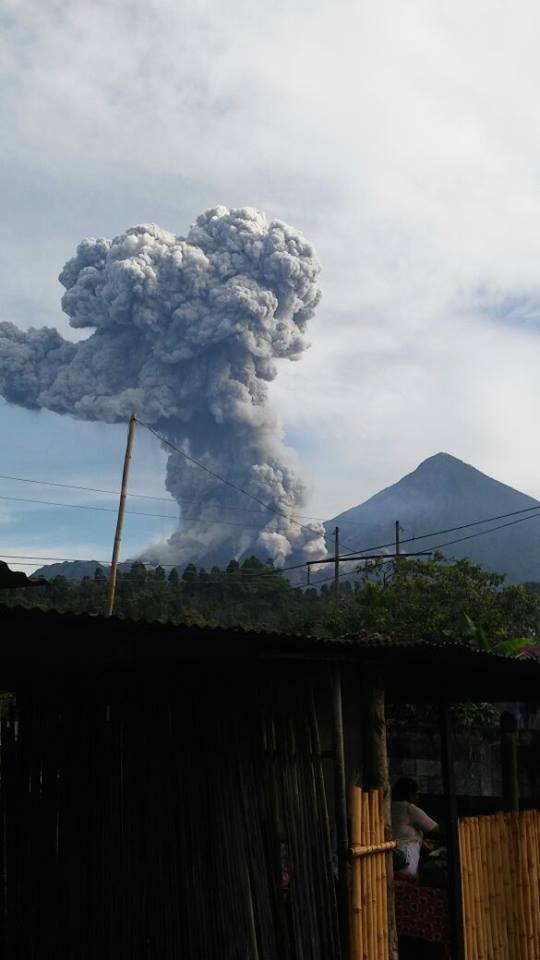 Explosion from Santiaguito’s Caliente dome yesterday (image: CONRED)
The volcano’s activity remains very high. Another strong explosion occurred at the Caliente dome yesterday morning at 08:08 local time. Similar in size as the previous one two days earlier, it was accompanied by heavy ballistic bombardment of the cone and its surroundings and generated pyroclastic flows.
The resulting ash plume rose to es, approx. 18,000 ft (6 km) altitude and drifted NW into the border region with Mexico before dissipating.
Courtesy of volcanodiscovery.com
http://tinyurl.com/zpg6u2a
August 20, 2016 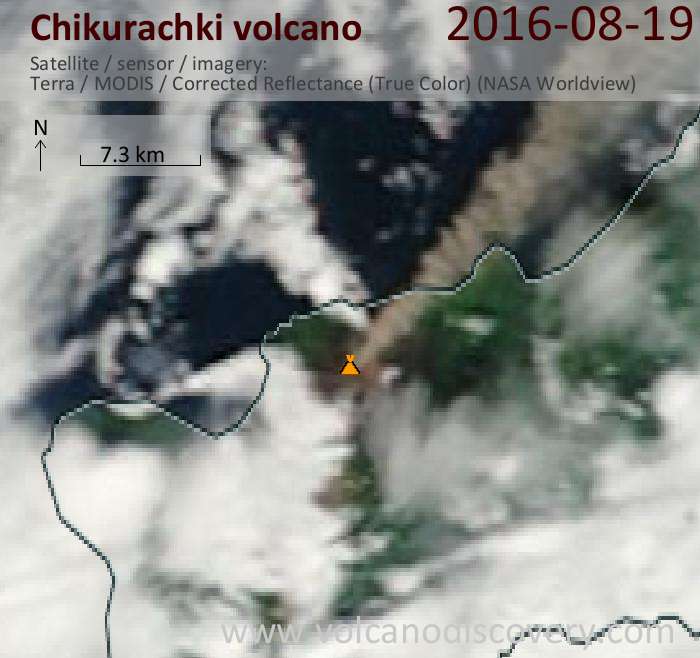 Ash plume from Chikurachki volcano today seen on Terra satellite (NASA)
The new eruptive phase, detected through satellite images since yesterday, continues. Ash emissions have increased today and form a plume stretching about 50 km to the NE and reaching the southern tip of Kamchatka.
Tokyo VAAC estimates the altitude of the plume which is moving at 35 knots to be at 10,000 ft (3 km).
Courtesy of volcanodiscovery.com
« Older Posts