Up to 140 million lives could be at risk from a potentially massive earthquake in Bangladesh, according to a new study. The research found that pressure is building along a fault line situated underneath the most densely-populated nation on Earth.
The research, published in the journal Nature Geoscience on Monday, found that a juncture between major tectonic plates in the region is locked and mounting with stress.
Citing data collected using GPS devices since 2003, the paper states that measurements found convergence of tectonic plates at a rate of 13-17mm “on an active, shallowly dipping and locked megathrust fault.”
One plate is moving under the other deep beneath the surface, and two plates are stuck together at the upper layers of the fault. The plates are covered in layers of sediment more than 20 meters thick.
The situation could result in a magnitude 8.2 to 9.0 earthquake in Bangladesh.
“Some of us have long suspected this hazard, but we didn’t have the data and a model,” study co-author Michael Steckler, a geophysicist at the Lamont-Doherty Earth Observatory at Columbia University in New York, said in an article on the university’s website. “Now we have the data and a model, and we can estimate the size.”
Steckler and his colleagues have estimated that the 140 million people living within 100km of the fault would be at risk if the quake struck the area. He stressed, however, that it is impossible to predict when such an earthquake might occur.
“We don’t know if it’s tomorrow or if it’s not going to be for another 500 years,” he said. “We don’t know how long it will take to build up steam, because we don’t know how long it was since the last one. But we can definitely see it building.”
Steckler went on to state that those most at risk are the 17 million people living around the low-lying Dhaka region of Bangladesh, which struggles with poor construction and is therefore most at risk of building collapses in the event of an earthquake.
Overcrowding in Dhaka could also hinder rescue efforts in such an event, according to Steckler.
“Right now, the streets are clogged with traffic such that it’s impossible to drive around Dhaka on a normal day,” he told Live Science. “If you fill the streets with debris, it’s really going to be impossible to get supplies and rescue equipment and things like that around.”
Those thoughts were echoed by co-author Syed Humayun Akhter, a geologist at Dhaka University.
“…In Dhaka, the catastrophic picture will be beyond our imagination, and could even lead to abandonment of the city,” he said.
The research team is now building a more advanced map of the shape of the fault, and looking at historical tsunami data to understand how often megathrust earthquakes occur, Steckler said.
The zone is an extension of the fault line which caused the 2004 Indian Ocean earthquake and tsunami that killed 230,000 people in 14 countries.
Courtesy of rt.com
http://tinyurl.com/zo2xx8v
July 16, 2016

Santa Maria volcano satellite image (c) Google Earth View
A strong explosion (another in the ongoing series) occurred at the Caliente lava dome yesterday at 13:30 local time. According to INSIVUMEH, it generated an ash column that rose to approx. 5 km altitude, i.e. about 2500 m above the dome.
Courtesy of volcanodiscovery.com
http://tinyurl.com/jx4ey2b
July 16, 2016

Glowing Avalanches And Explosions At Sinabung Volcano In Sumatra, Indonesia 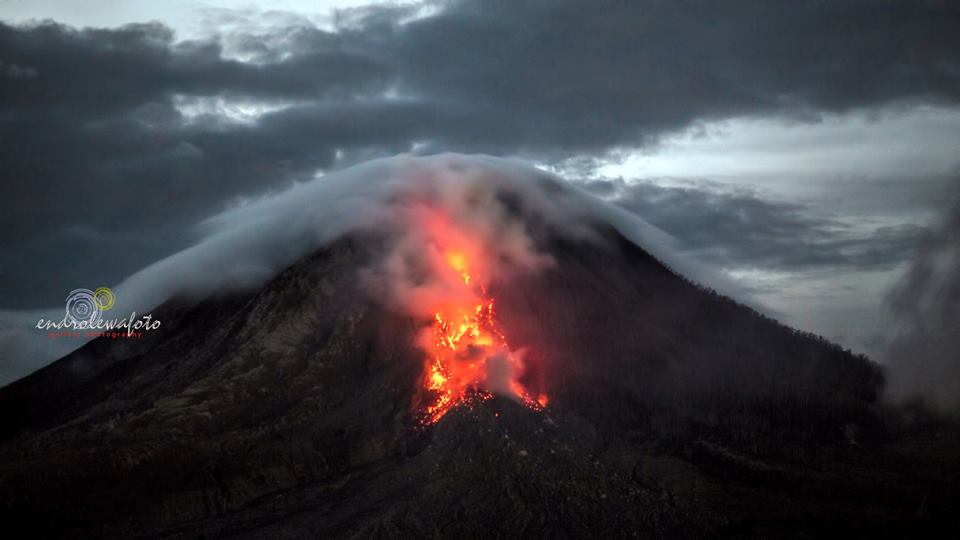 Glowing avalanche at Sinabung volcano yesterday night (image: Endro Lewa / facebook)
No significant changes have occurred in the ongoing effusive-explosive eruption of the volcano. The slow lava dome growth continues to feed a prominent lava lobe on the upper ESE flank that sheds glowing avalanches.
Occasional larger collapses of this lava lobe produce more violent pyroclastic flows.
In addition, the volcano continues to produce explosions, caused by trapped, pressurized gasses contained in the magma from the upper conduit or the dome itself. These vertical explosions have been occurring at rates of one per day on average recently. This morning, an ash plume rose to 15,000 ft (4.5 km) altitude, i.e. approx. 2 km above the summit.
Courtesy of volcanodiscovery.com
http://tinyurl.com/hhjk442
July 16, 2016

The volcano is showing signs of unrest that could be (but not necessarily) precursors of a new eruption. Since the beginning of the month, shallow (0-2 km depth) volcanic earthquakes of rock-fracturing type under the Dolomieu crater (the main vent of the volcano) have been more frequent, probably caused by a new magma intrusion.
The volcano observatory’s (OVPF) latest statement mentions that 111 “collapses” have occurred recently on the Dolomieu crater, the Enclos and on the lava flow of Aug-Oct 2015.
In addition, it seems that new deformation has started during the past days, which would fit into the picture that the volcano is likely preparing itself for a new eruption, although the trend was still unclear and needs to be confirmed.
Gas emissions have not shown any significant variation above background levels.
Courtesy of volcanodiscovery.com
http://tinyurl.com/hcd73uy
July 16, 2016

After 36,000 years, a massive volcano near Rome rumbles to life

Tano Pecoraro/AP/File
Italy, home to one of the most famous volcanic disasters in history, is showing signs that another massive eruption is brewing, according to a new study published in the journal Geophysical Research Letters.
Almost 2,000 years after the burial of Pompeii and nearby Herculaneum during the eruption of Mt. Vesuvius in 79 A.D., an ancient volcano near Rome is rumbling to life, say scientists. About 19 miles away from the heart of Rome, an ancient volcanic district called the Colli Albani is stirring. The Colli Albani, a 9-mile-long semicircle of hills on the outskirts of Rome, last erupted 36,000 years ago, so geologists had classified it as extinct – until about 20 years ago.
In the early 1990s, the area around the Colli Albani Volcanic District began showing geological indicators of a future explosion: ground levels shifted, steam vents opened, and earthquakes shook the hills around the site.
Since that time, scientists have used these symptoms, along with satellite data and information about the volcano’s previous eruptions, to evaluate the risk that the Colli Albani poses to the surrounding region.
The increase in earthquakes (many of which occurred during an “earthquake swarm” between 1991 and 1995) and ground level changes in the region indicate the presence of a magma bubble forming beneath the earth near Colli Albani, pushing upwards until it can erupt.
Using historical data, researchers determined that Colli Albani is not extinct, as was long believed – it merely operates on a 31,000-year cycle of dormancy and wakefulness. And when the volcano is awake, scientists say, it is dangerous.
Over the last 200,000 years, scientists say that the region surrounding the Colli Albani has risen by 164 feet, and it continues to rise by nearly an inch per year, indicating that the magma bubble is still growing. For thousands of years, the magma bubble has been trapped by pieces of land that have now begun sliding against each other. If those pieces shift enough, Colli Albani will erupt.
When conditions are right (or, from a human perspective, terribly, terribly wrong), Colli Albani can produce eruptions similar to the one that destroyed Pompeii and Herculaneum in 79 AD. Like Vesuvius, Colli Albani could erupt with a towering cloud of burning ash and showers of heated “lava bombs” that could damage or destroy nearby towns.
Past eruptions have also seen swift streams of lava, scientists say, where Roman suburbs now cluster. A future eruption could devastate them.
Rome itself would be safe from such an eruption in all but the very worst of circumstances. If the wind is blowing in the right direction, it could steer an ash cloud from Colli Albani towards the heart of the city.
The good news, according to researchers, is that time is on Rome’s side. The study’s lead author, Fabrizio Marra, a volcanologist at the National Institute of Geophysics and Volcanology in Rome, told the American Geological Union that he does not expect the Colli Al-bani to erupt for another 1,000 years.
“We expect for sure some initial stages which may not be so explosive,” said Dr. Marra, “but it may evolve in time.”
In the meantime, Roman officials are carefully monitoring the geophysical conditions around the volcano, to keep area residents safe.
Courtesy of csmonitor.com
http://tinyurl.com/hj383yx
July 16, 2016

Heavy rain and thunderstorms continue to cause problems in southern Alberta Friday afternoon.
As of 5:00 p.m. there were tornado warnings for the M.D. of Willow Creek near Claresholm and Stavely and for Lethbridge and several surrounding communities.
Tornado warnings were lifted hours later.
There are also numerous thunderstorm watches and warnings across the south of the province.
The Calgary Fire Department reported a spike in flood-related calls Friday afternoon.
There’s been some overland flooding in Shawnessy that’s resulted in water in some basements.
Manhole covers floated off in the northwest, while in the community of Hawkwood, a vehicle got trapped in deep water.
There are also reports of problems with street lights in parts of the city.
The City of Calgary says up to 90 mm of rain is expected from midday Friday through to Sunday.
City staff have been releasing water from the Glenmore Reservoir to accommodate the forecasted rainfall, which has resulted in flows on the Elbow River increasing.
People are being warned to keep a safe distance from the banks of the Elbow until further notice.
Calgary Transit is urging people to give themselves extra travel time, as unpredictable weather can create major delays, especially on city buses.
The Calgary Stampede is a washout again Friday with only the brave venturing down to the grounds in wet weather gear.
“There are lots of indoor activities to take advantage of,” says Stampede spokesperson Jennifer Booth.
“We know we’re an outdoor show, so we’ve always had a really good balance of indoor and outdoor activities for visitors.”
The Stampede is again offering $5 entry between 5-7 p.m. to try to boost attendance.
Courtesy of cbc.ca
http://tinyurl.com/hpq9sfr
July 16, 2016

The New York State Department of Environmental Conservation and the U.S. Drought Monitor confirmed Friday that all of Western New York is now experiencing drought conditions. In fact, the Drought Monitor says that Western New York is one area experiencing severe drought conditions. Forecaster Kirk Apffel with the National Weather Service in Buffalo says the water levels here are about 3 to 8 inches below normal for this time of year. He says that puts most areas at about half of what they should have significant rainfall not coming anytime soon
Apffel says it’s a good idea to use some voluntary water conservation steps that may help your community. Those include fixing dripping and leaking faucets, and sweeping sidewalks and steps instead of hosing them off. The DEC has issued a drought watch for the entire state.
Courtesy of chautauquatoday.com
http://tinyurl.com/zvsu4kg
« Older Posts